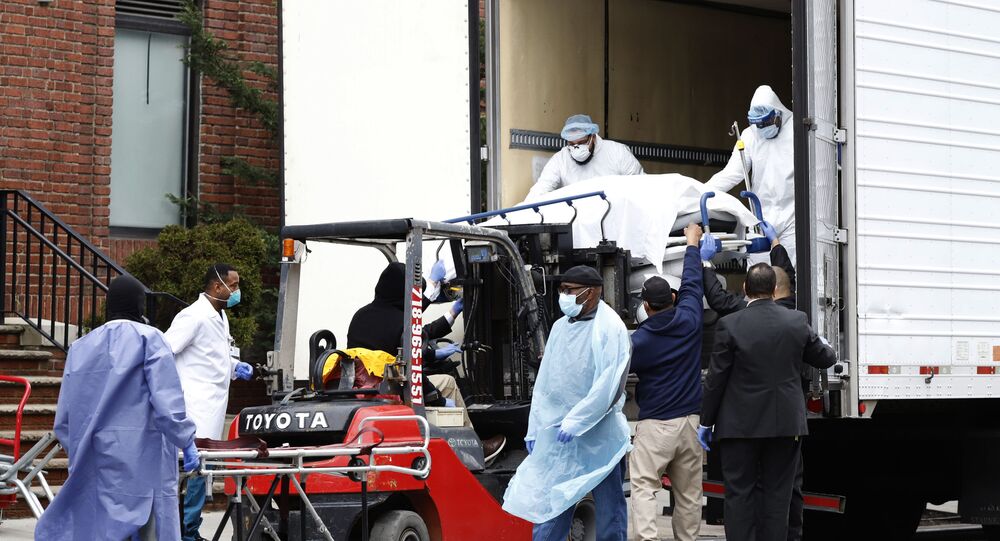 A skyrocketing number of COVID-19 cases and coronavirus-related deaths has put the US healthcare system to test as tens of millions of Americans risk either insufficient treatment or no treatment at all. American health policy experts explain how the current healthcare system places a substantial part of the US population in dire straits.

The COVID-19 pandemic has rapidly engulfed the US, with a world-topping figure of over 400,000 confirmed coronavirus cases and third place in the number of coronavirus-related deaths. The pandemic has cut supply chains and shut tens of thousands of small and medium businesses down, prompting an estimated 10 million jobless claims.

The US is the only country out of 33 advanced and industrialised nations that does not provide guaranteed universal medical care coverage for all of its citizens, regardless of their ability to pay. US health policy experts explain how the country's unique and problematic health insurance system has influenced the nation's ability to cope with the coronavirus pandemic.

How US Insurance System Works and Was It Ready For a Pandemic?

Americans get access to medical care through a hybrid of federal, state or privately-funded insurance programmes. This patchwork has left almost 27 million in the nation uninsured amid the COVID-19 crisis. Spiralling unemployment caused by coronavirus-related economic disruptions has not made it easier, as many have lost their jobs, and, along with their paychecks, their health insurance too.

Over the last decade the US government has tried to expand the healthcare coverage. According to the Kaiser Family Foundation's (KFF) study, most uninsured Americans are low-income families with at least one worker. The implementation of the Affordable Care Act (ACA) under US President Barack Obama expanded Medicaid, thus slashing the number of uninsured from 46.5 million in 2010 to fewer than 26.7 million in 2016. However, in subsequent years the number of uninsured non-elderly individuals has steadily risen, mounting to 27.9 million in 2018.

"These are national numbers that reflect the implementation of the Affordable Care Act, which was signed in 2010 and took full effect in 2014", explained Anthony Wright, executive director of the advocacy group Health Access California.

According to Wright the increasing number of uninsured stems largely from a series of steps taken by the Trump administration, including:

•             making it more difficult for people to stay on Medicaid through increasingly complex work requirements.

Meanwhile, the Kaiser foundation's study outlines several groups of American citizens not covered by any insurance plan. Thus, 45% of uninsured adults cite high costs for coverage; many do not have access to coverage through a job; some adults, who live in states that did not expand Medicaid, remain ineligible for financial assistance. At the same time there are those who are eligible for financial aid under the ACA, but are unaware that they can get help, while some cannot apply for the ACA as they have income above the separate line for financial assistance.

"Without additional action, people who are uninsured will be reticent to get the testing and treatment they need, for fear of the financial consequences", Wright underscored, adding that, "This impacts not just these patients, their families, but the ability of our public health efforts to get us out of this crisis".

Currently, elderly Americans – aged 65 and older – are covered through the national Medicare program – as well as some younger people with disability status – while many the poor are offered federal-state Medicaid programmes.

However, Medicaid plans are not similar for all the states, with about a third not covering many low-income adults, the professor pointed out. While some US citizens can afford individual insurance plans "almost half of Americans are covered through their employment", he noted.

Additionally, while over 27 million Americans currently have no health insurance, millions of others have lost their jobs, and thus their coverage, he explained.

Though coronavirus tests are now free for all US citizens due to the $2-trillion bill recently adopted by the US Congress, if a person has no insurance plan it means that a patient faces astronomical costs for the treatment of COVID-19. Citing an analysis by independent nonprofit FAIR Health, CNBC estimates that an uninsured American with COVID-19 could easily pay a an average of $73,300 for a 6-day hospital stay.

"Hospitals will usually provide testing and treatment to those without insurance, but can bill for services they provide, driving patients into bankruptcy", the academic detailed.

Those with insurance do not feel safe enough, as high costs of deductibles continue to bite. According to Gallup, a record 25% of Americans put off treatment for serious medical conditions and 8% for less severe cases in 2019, because of the cost.

"Most insurance coverage has 'cost-sharing' provisions, so patients often end up paying for some share of treatment costs themselves, though not for testing at this time", observed Jost. "Many Americans with high cost-sharing avoid treatment even in normal times, but in an economic crisis like the present, this becomes even more problematic".

COVID-19 treatment will come with a substantial price tag even for insured Americans, as FAIR Health study indicates. According to for non-profits, out-of-pocket costs of those who are using in-network providers will amount to between $21,936 and $38,755, depending on the cost-sharing provisions of their health programme. However, if their insurance company considers this care to be out-of-network the costs may surge up to $74,000. And it is not that the COVID-19 treatment is somewhat exclusive: medical care costs in the US are the highest in the world as a result of third-party insurance billing schemes.

Three years ago, CNBC's Ester Bloom weighed how much an average American spends on healthcare, finding that average annual costs per person in 2017 were nine times higher today than they were in 1960. According to eHealthInsurance updated data, health insurance premiums for unsubsidised customers averaged $440 per month in 2018 while the average annual deductible for individual plans reached $4,578.

In general, Americans paid $3.6 trillion for medical care in 2018, or $11,172 per person, as the Centres for Medicare and Medicaid Services (CMS) estimates, which is more than twice the per capita average of other developed economies. These figures are projected to grow at an average annual rate of 5.4% for 2019-2028, to reach $6.2 trillion by 2028.

CMS elaborates that the largest share of total medical care spending is sponsored by the federal government (28.3%); the households (28.4%); while the shares of private businesses, state governments and other private revenues account to 19.9%, 16.5% and 6.9%, respectively.

"Despite many health policy reforms, prices across the health care industry are the primary reason why the US spends more on health care", said Anthony Wright. "The inflated price of health care is unrelated to the cost of care, quality, or the outcomes. In some instances, the inflated prices are more related to the rampant consolidation within the health care system. Other market failures also drive up health care costs, from surprise medical bills to drug manufacturers cornering the market on generics. Fundamentally, consumers are not able to negotiate their cost of care, have limited ability to 'shop around', and are not in a position to say 'no' to needed care".

Now that the US is facing an unprecedented pandemic crisis it's time "to recognize health care not as a commodity, but a system that needs to be invested in", the health care access expert underscored.

"Our health system is stronger when everyone is included, and that’s even more true during a pandemic", he said.