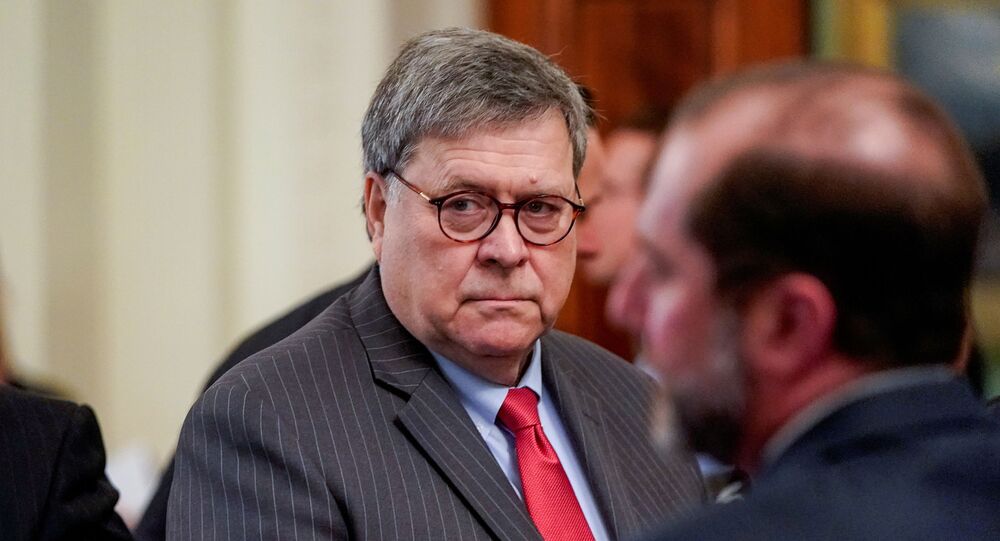 On 18 February, the Federal Judges Association called an emergency meeting citing concerns over Attorney General William Barr and Donald Trump's intervention in politically sensitive matters. However, US political observers believe that Trump's opponents are actually the ones using the justice system to obstruct the administration's policies.

AG Barr has recently come in the crosshairs of former Justice Department officials who urged him to resign in an open letter signed by over 2,000 former career attorneys.

"Mr Barr's actions in doing the President's personal bidding unfortunately speak louder than his words. Those actions, and the damage they have done to the Department of Justice's reputation for integrity and the rule of law, require Mr Barr to resign", the letter reads.

However, the signatories to the statement added that they "have little expectation" that AG Barr will step down and called upon DOJ career officials "to take appropriate action".

The open letter came on the heels of Barr's intervention in the sentencing of President Trump's former aide Roger Stone, who was found guilty in November on several charges stemming from Robert Mueller's "Russia investigation". Mueller's probe, which had sought links between Trump and Moscow but eventually found none, has been repeatedly denounced by the US president as a "witch hunt".

Two months in jail for a Swamp Creature, yet 9 years recommended for Roger Stone (who was not even working for the Trump Campaign). Gee, that sounds very fair! Rogue prosecutors maybe? The Swamp! @foxandfriends @TuckerCarlson

​On 11 February, the DOJ submitted a new sentencing recommendation for the former Trump aide thus overruling prosecutors who requested from seven to nine years in prison for Stone's crimes including obstruction of justice, lying to Congress and witness tampering. The next day Trump tweeted that it was AG Barr who had intervened into the case.

Congratulations to Attorney General Bill Barr for taking charge of a case that was totally out of control and perhaps should not have even been brought. Evidence now clearly shows that the Mueller Scam was improperly brought & tainted. Even Bob Mueller lied to Congress!

​Open Letter: 'Nothing But a Cynical Political Move'

While the US mainstream press insists that the former DOJ officials' letter was an impartial initiative, kicked off by ex-attorneys who served in Republican as well as Democratic administrations, Ron Coleman, New York attorney and political commentator, has dubbed it as "nothing but a cynical political move".

"The vast majority of these signatories are former Obama officials and Democrat Party donors", he says. "Their claim to being offended by the actions of the Attorney General – which are entirely legal, constitutional and appropriate – stands in stark contrast to their silence regarding FISA abuse and the highly problematic conduct in the Justice Department that Mr Barr is investigating."

As it turns out, one of the organisers behind the open letter is “Protect Democracy”, a nonprofit legal group headed by Ian Bassin, the ex-Associate White House Counsel under the Obama administration. The entity is known for its criticism of the Trump administration's policies and exerting pressure on AG Barr over the Mueller report release. According to CNN, the non-profit organisation was behind the May 2019 letter signed by former federal prosecutors who claimed that Trump would have faced felony charges for obstruction of justice stemming from the Mueller report if he were not the US president.

According to Paul Gosar, a Republican congressman from Arizona, the February letter from former DOJ employees is a "great example of the swamp that Donald Trump was elected to eliminate".

"This letter is just another desperate and hypocritical effort by Obama loyalists who will attack the current Administration which has every right to question the unusually harsh sentencing of Roger Stone", he presumes. "The true injustice is their acceptance of this political prosecution. Their views mean nothing."

Unprecedented Manipulation of the Justice System

For his part, Paul Valone, a US political commentator, drew attention to the fact that NBC News – "which is by no means a friend of the Trump administration" – described the signatories to the open letter as "progressive prosecutors" who were "looking to 2020 with hope of winning key district attorney offices around the nation and boosting their influence with an overhaul of the system from within". According to Valone, this summary nails the former DOJ officials' real intentions.

"What we see in the United States is the unprecedented manipulation of the justice system by the American left as part of its effort to seize power", he believes.

The political commentator recollects a series of actions involving the DOJ, including:

·         attacks levied during the confirmation hearings for Justice Brett Kavanaugh;

·         fraudulent use of the unverified Steele dossier in obtaining Foreign Intelligence Surveillance Act (FISA) warrants to investigate the Trump campaign;

·         the perversion of the impeachment process by Speaker Nancy Pelosi and Representatives Adam Schiff, Jerry Nadler and others;

·         and last but not the least, SWAT tactics and disproportionate sentencing applied to Trump ally Roger Stone.

"The American people, having witnessed the abuse of power orchestrated by the left, will deliver a blow to the Democrat Party in the 2020 elections", Valone foresees. "Frustrated by its failed effort to turn the United States into a socialist republic, the left will then foment civil unrest in urban population centers around the country. What happens after that is anyone’s guess."