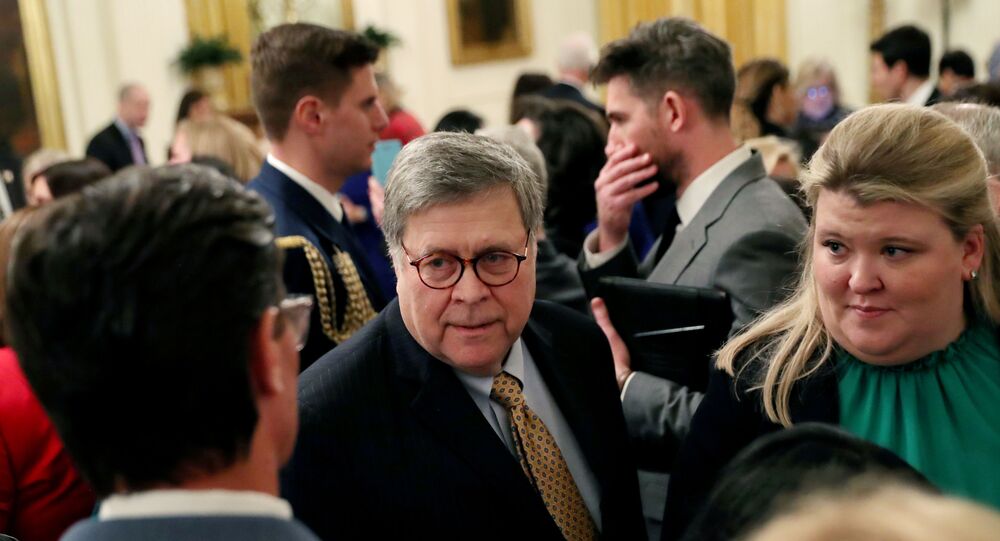 The US attorney general is facing wide condemnation after reportedly using his position to lighten the sentencing of one of US President Donald Trump’s longtime associates, following the president's angry tweets.

A group of 1143 former US Department of Justice (DoJ) prosecutors and officials who have served both Republican and Democratic presidential administrations signed a statement calling on Attorney General William Barr to resign, following what is reportedly his interference in the sentencing of US President Donald Trump’s former election campaign adviser Roger Stone.

Former DoJ officials have called on the department's current employees to report "future abuses", and have additionally warned against carrying out "directives that are inconsistent with their oaths of office".

"And we call on every DOJ employee to follow their heroic example and be prepared to report future abuses to the Inspector General, the Office of Professional Responsibility, and Congress; to refuse to carry out directives that are inconsistent with their oaths of office; to withdraw from cases that involve such directives or other misconduct; and, if necessary, to resign and report publicly — in a manner consistent with professional ethics — to the American people the reasons for their resignation. We likewise call on the other branches of government to protect from retaliation those employees who uphold their oaths in the face of unlawful directives. The rule of law and the survival of our Republic demand nothing less," the statement reads.

The high-profile group's letter noted that all DOJ employees take an oath to apply US law "equally to all Americans", pointing out that the department’s rulebook states that all DOJ legal decisions “must be impartial and insulated from political influence”.

“President Trump and Attorney General Barr have openly and repeatedly flouted this fundamental principle, most recently in connection with the sentencing of President Trump’s close associate, Roger Stone, who was convicted of serious crimes,” the letter states.

Barr’s actions and the damage he and Trump have done to the integrity and rule of law at the DoJ “require Mr. Barr to resign”, notes the letter.

Barr's interference in the Stone case came soon after Trump tweeted his objection to the sentencing recommendations for his former campaign adviser. In his justification for the move, Trump insisted that he has “the legal right” to intervene in criminal cases, although suggesting that he has “so far chosen not” to do so.

Barr's unusual intervention in the matter - after Stone was found guilty on every charge brought against him, including obstructing justice, threatening witnesses and lying to the court - quickly resulted in the resignation of the four top prosecutors on the case. The intervention has sparked outrage from many officials, with some calling for an investigation of the DoJ.

Soros’ Meddling in Prosecutors’ Elections May Worsen Crime in the US, AG Barr Reportedly Warns