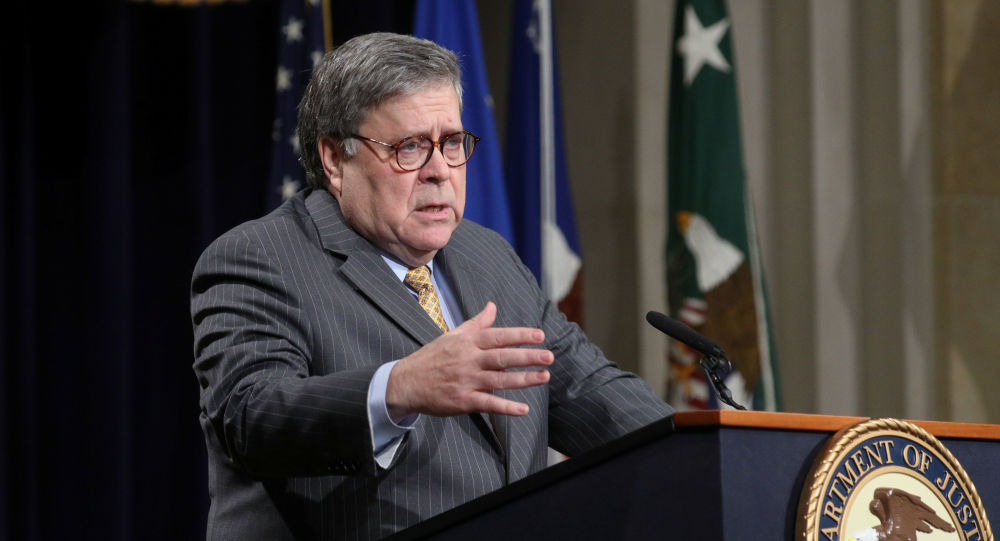 The US attorney general earlier commented on the investigation’s results into possible FBI misconduct in acquiring FISA warrants by saying that the bureau had used the “thinnest of suspicions” to spy on a Trump campaign member in 2016.

US Attorney General William Barr has stated that despite the conclusions of the report, arranged by Inspector General Michael Horowitz and published on 9 December, there is still a possibility that the FBI acted in "bad faith" when it acquired Foreign Intelligence Surveillance Act (FISA) warrants to spy on Trump aide Carter Page.

"I think our nation was turned on its head for three years based on a completely bogus narrative that was largely fanned and hyped by a completely irresponsible press", the attorney general said.

Barr further added that it's "premature to make any judgment" on whether the FBI was biased in starting its Russia probe or not. The attorney general went on to accuse the FBI of "inexplicable" behaviour and committing "gross abuses" during its investigation.

Horowitz released the report outlining the results of his investigation into how and why the FBI started the probe into Trump's campaign and whether it improperly filed for FISA surveillance warrants over the course of it. According to the paper, the bureau made 17 "significant errors or omissions'' when it applied for warrants, but didn't act out of bias or in bad faith when it launched the probe.

TRUMP on the IG report: "This was an overthrow of government, this was an attempted overthrow -- and a lot of people were in on it." (Trump was a private citizen when the Russia investigation began.) pic.twitter.com/g8saDzcs5F

The latter conclusion undermines Donald Trump's claims that his campaign was illegally spied on based on allegations from the so-called Steele Dossier. The dossier was essentially a collection of allegations potentially damning for Trump assembled at the behest of and funding from the Democratic National Committee and its candidate Hillary Clinton ahead of the 2016 election.

Reacting to the Horowitz's report, Barr stated that it showed that the FBI started "an intrusive investigation" into the presidential candidate's team based on the "thinnest of suspicions". The attorney general added that in his opinion, the grounds for the bureau's actions in the Russia probe were "insufficient".

Trump, in turn, argued that the IG's report showed that everything with the investigation was "far worse" than "a lot of people thought it would be". He called the Russia probe "an embarrassment to [the] country" and said that such an ordeal should not be repeated for any future president.