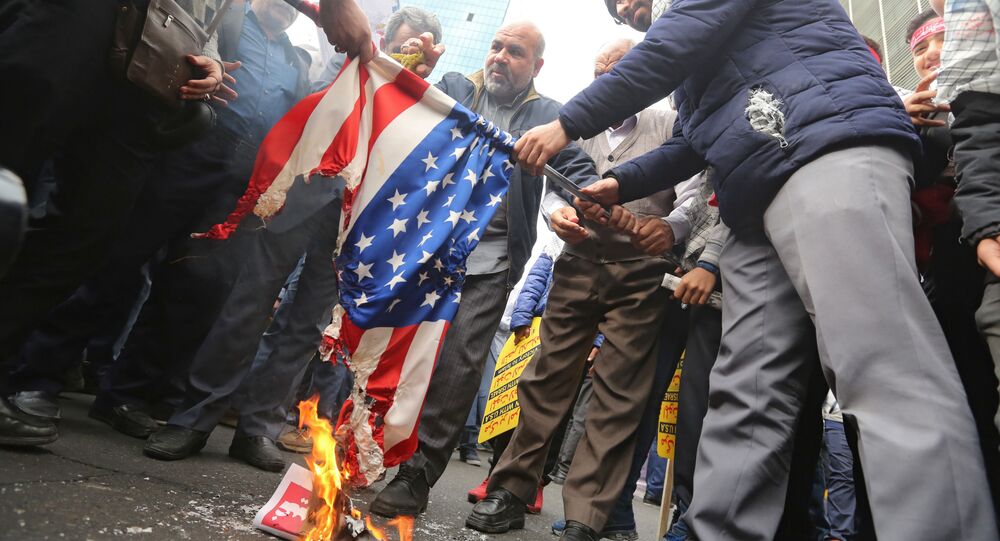 In the Name of Ratings, Corporate Media has ‘Deceived the American Public’ About Iran For 40 Years

Monday marks the 40th anniversary of the beginning of the Iran hostage crisis, when 52 Americans were held hostage for 444 days after students who supported the Iranian Revolution seized the American Embassy in Tehran, changing the course of US-Iran relations and American politics.

Gareth Porter, a historian, investigative journalist and the author of “Manufactured Crisis: The Untold Story of the Iran Nuclear Scare,” joined Radio Sputnik's Loud & Clear Monday to discuss how the corporate media’s coverage of the hostage crisis enormously influenced US public opinion toward Iran.

“It’s clear that a lot has happened in the meantime that involves more than simply remembering the hostage crisis. It’s very true that that event had enormous influence over public opinion in the US and that particularly the US national security state itself nursed a lot of sense of grievance toward Iran because of that, but it’s by far not the only or most important cause of the tension and real serious conflict between the US and Iran,” Porter told hosts John Kiriakou and Brian Becker, adding that a great deal has occurred since the hostage crisis to impact US-Iran relations.

Porter told Sputnik the event created a “political atmosphere in the US that was hostile to the Islamic Republic, which was established in 1979, and that clearly made it more difficult for subsequent government administrations in the US to make decisions that would change the reality. And it made it easier for, I must say, Israel to intervene politically and exercise enormous influence over US policy toward Iran beginning with the Clinton administration. In that sense, it has clearly enabled a lot of changes in the wrong direction with regards to US policy toward Iran.”

During the Iran hostage crisis, the students demanded that the US extradite the former US-backed Shah of Iran, Mohammad Reza Pahlavi, who was overthrown earlier that year during the revolution and had come to the US to receive cancer medical treatment. The US and Iran eventually signed an agreement to release the hostages in January 1981, after the US agreed to lift sanctions it had imposed in reaction to the hostage crisis - but not before a botched rescue attempt severely embarrassed President Jimmy Carter’s administration and stiffened Iranian hostility to Washington.

“It’s impossible to say what the course of US-Iran relations would have been had the response in the US to that hostage-taking been relatively rational. But it wasn’t. In fact, what happened - and I think there is a whole history here that people really need to be familiar with, that is not known at all - the mass media, the corporate media in the US, particularly ABC, was responsible for creating nightly news coverage, but all the networks basically chimed in and made this a major news coverage cause that was aimed at increasing their audience. They recognized that this - like the war against [Former Iraqi President] Saddam Hussein’s regime in 1991 - was a way of increasing their listening and viewing audience, and so took advantage of it fully. And that had very serious consequences,” Porter explained.

Most Americans, according to Porter, are not aware of the history of US-Iran relations, particularly the overthrow of Iranian Prime Minister Mohammad Mosaddegh in 1953 in a carefully orchestrated coup d'état by the US Central Intelligence Agency and its UK counterpart, MI6. The coup was triggered by the British government’s uneasiness over losing control of the Iranian oil industry after Mosaddegh severed all diplomatic ties with Britain in 1952.

“The media and of course the US national security state, never allowed the American people to understand the underlying issues that were at stake in the earlier period of US-Iran relationships when the US overthrew the democratically-elected government of Mossadegh in 1953,” Porter noted. “That overthrow was a result of a decision by the Eisenhower administration to ally with the British colonists worldwide, because they understood that the British had done Iran wrong, and they knew the Iranians were quite justified in nationalizing oil. But they were unwilling to break the alliance with the British because they believed that they needed the British position in Southeast Asia and in the Middle East, where there were what they thought of as extremist nationalists who would be against US influence and power in those parts of the world.”

“And so there was a fundamental decision made, and of course, that required that they continue to deceive the American public about what the issues really were,” Porter explained, noting that the US media became “part of the national security state’s apparatus for continuing to mislead the American public.”

The US media frequently propagates false narratives that veil historical facts from the American public, he said.

“You have layer upon layer of false narratives, particularly on Iran, of course, over decades now. It’s been 40 years on that this process has been going on, and it simply gets deepened as time goes by. And we are now so far under the influence of these false narratives that it’s very difficult for the American public to see the truth at all or push for the right policies because of those narratives,” Porter explained.

In another move that deteriorated US-Iran relations, the US pulled out of the Joint Comprehensive Plan of Action (JCPOA) in May 2018, despite Tehran's continued compliance with the agreement by not pursuing a nuclear weapons program, as attested to by the International Atomic Energy Agency.

“The Obama administration basically gave the anti-JCPOA movement, if you will, its strongest card, which is that it did not contest the notion that Iran, of course, wants nuclear weapons and has secretly worked on nuclear weapons and therefore can't be trusted. And that is something that allows the people who are absolutely opposed to the JCPOA and want to have a military confrontation with Iran to have their way with public opinion in the US. That’s where we are, unfortunately,” Porter noted.

US Wants to Buy Heavy Water From Iran, Even Despite Formal Refusal - Iran's Vice President

40 Years Later: The Seizure of the US Embassy in Iran