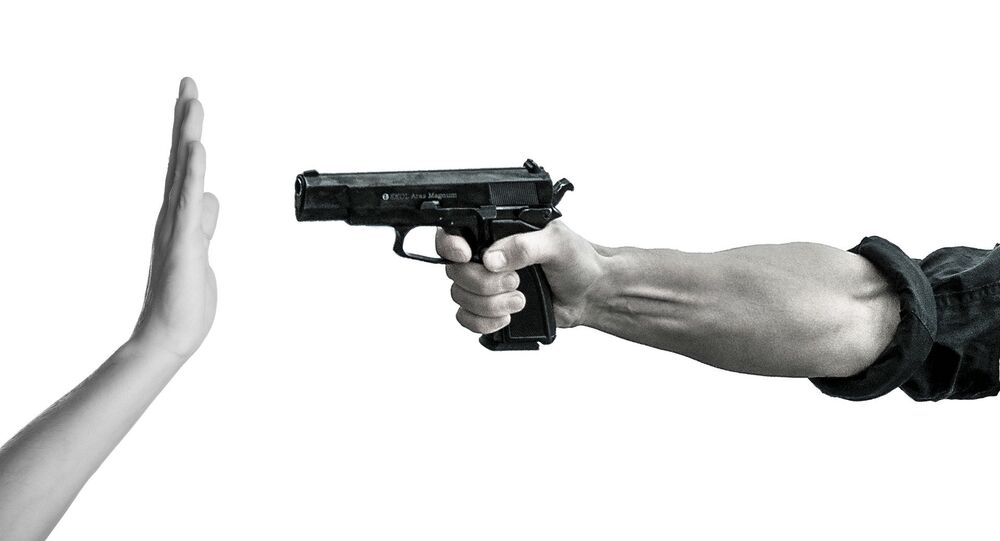 On Tuesday, Ohio Governor Mike DeWine urged Republicans in the state legislature to approve so-called “red flag” legislation and expand background checks for gun purchases and ownership. Under such laws, police or family members can petition a state court to take away guns from people who may pose a danger to the public or themselves, but who have not yet committed a crime.

“My real worry about the proposed red flag legislation is that it seems to give carte blanche to the police state to investigate anyone they consider a threat and essentially remove their guns without due process or [them] doing anything wrong,” Lathem told hosts John Kiriakou and Brian Becker.

“There’s an interesting case in 2017 that played out for a few months: a black activist - Rakem Balogun - he was the founder of the Huey Newton Gun Club, and the FBI started investigating him for Facebook posts that were critical of police. And they ended up arresting him, and he was charged with essentially being a danger to the public. And the charges were dropped six months later, but his life was ruined in the meantime. These red flag laws, the danger is, they’re looking at things like that,” Lathem explained.

The activist said that US politicians must first acknowledge and then tackle deeply-rooted problems of misogyny and white supremacy, which are behind shootings like the ones in El Paso and Dayton that took place over the weekend and left 31 people dead.

“There's no question that the El Paso shooter [Patrick Crusius] was driven entirely by white supremacy. It’s hard to stomach, but you can read his manifesto. But you hear politicians on both sides, which makes you wary about their approach to gun violence, talking about things like mental illness and video games instead of wanting to really tackle deep-rooted problems of misogyny and white supremacy that are driving these shootings.”

“Another point is, this sort of approach of giving the police the power to investigate ... has proven failed in the past. The Dayton shooter [Connor Betts] was removed from high school from making threats against his classmates, but no further actions were really taken, and he was allowed to buy guns that he used to carry out a shooting,” Lathem explained.

“A lot of politicians for a lot of reasons don’t want to actually look at the root of this issue. And even [US President Donald] Trump, the other day, when he was giving lip service to white supremacy - not that he was actually going to act on it - actually tied it to immigration reform. The absurdity of that is that almost further reinforcing the white supremacy. The current politicians’ approach to handling these things - they seem to want to take other routes instead of tackling the underlying cause,” Lathem explained, referring to Trump’s statement Sunday that the US must take steps to curtail “violent culture, including video games that celebrate violence.”

According to Lathem, existing gun control measures and suggested gun reforms disproportionately affect poor and working-class people and often use a “class-based” approach.

“What a lot of politicians, liberals, who are well-meaning get wrong is they try to compare the US to other countries, like: ‘Look at Australia’ or ‘Look at the Netherlands.’ But the US is completely unique when it comes to firearms. There’s nothing like this nation anywhere else in the world as far as the culture, the way it’s already ingrained in society and the huge amount of firearms in circulation in society. It’s going to take a realistic approach that actually addresses the underlying causes of the violence,” Lathem told Sputnik.

“And another thing that has to be talked about and addressed if you really want to address gun violence in the US is gun violence by the police, especially against black and brown and poor people. Part of the conversation, if you want to have a real earnest approach, is the disarming of the police, and there’s a need to have a conversation started around that as well,” Lathem explained, also denouncing the “reactionary, white supremacy politics” that the National Rifle Association (NRA) advocates.

“Younger people and a lot of segments of the population are starting to become more aggressive and turn away from these reactionary ideas [held by the NRA]. I think you’re seeing the gun culture starting to split a little, and perhaps the far right won’t forever have their stranglehold on people in the US who already have and use guns,” Lathem added.