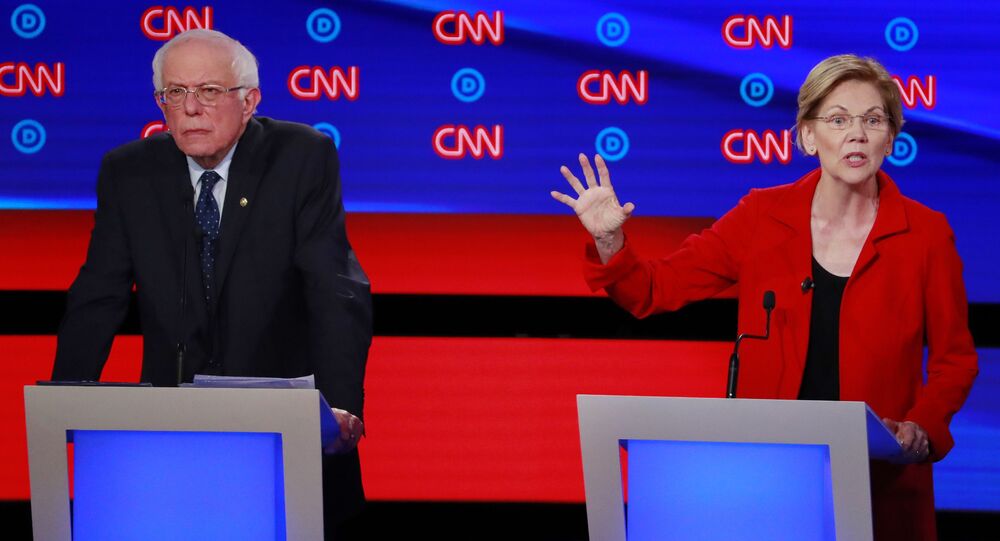 If 2016 Was Brutal, 2020 is Going to be Exponentially More So - Professor on Dem Debate

Ten Democratic presidential candidates took part in a televised US debate on Tuesday to share their views on how to succeed in the 2020 elections. Three women and seven men debated border policy, healthcare and other pressing issues on the US agenda.

Sputnik: So from your perspective, who was the winner of last night's debate?

Inderjeet Parmar: Well, I think the Warren/Sanders combination did really well. They basically seem to be the left of the party. A lot of people thought that they would probably have a United Front against the more timid elements of the party. And that's effectively what they did. So I think they came out pretty strongly, they both had quite a lot of air time to defend their healthcare proposals and so on. So I would say those two.

Apparently, Marianne Williamson also was the most googled after the debate as well or during the debate. Partly because she seemed to appeal to a slightly different component of a way to take on Donald Trump  which she calls the 'dark psychic forces' that he represents, which was outside of the idea of policies, specifically to do with detailing issues and problems, but kind of looking at the malcontent energies that he was tapping into. The most basic kind of instincts of the most backward elements of America. She seemed to do really well on that front.

But, generally speaking, I would say that the Sanders/Warren grouping did very, very well.

Sputnik: Foreign policy wasn't really mentioned much during the debate outside of Pete Buttigieg who vowed to take troops Afghanistan in his first year. Why do you think the debate steered clear of foreign policy for the most part?

Inderjeet Parmar: Well, I think in US elections, which includes the primary debates, primary elections and debates foreign policy doesn't play a huge role in general. People are much more interested in and focused on their domestic agendas. And that is what largely voters are motivated most highly by as well. So not surprising, and it's not the first time. But I think China got a mentioned in there as well. That was to do with the way in which President Trump has been dealing with trade matters and imposing terrorists, alienating European allies, and so on. So that's been there. But really, that's not unusual for foreign policy to be hardly mentioned at all. In, in the primaries, or even in the general election.

Sputnik: One of the key talking points last night was also brought up by Pete Buttigieg, who said that Democrats continue to fail to pass their big policy plans. Do you think that's valid?

Inderjeet Parmar: The problem is that when you look at something like healthcare, for example, you're dealing with very, very powerful corporate forces. Insurance companies, hospitals, the doctors, medical association and drug companies. So you're dealing with very large forces and those forces, the doctors, the American Medical Association, the pharmaceutical companies, they spend a very large amount of money in, in election campaigns, and donations to Congress People and the senators.

They've got a very large stake in making sure that anything very radical tends to be very, very difficult to pass. They did that largely in the 90s with Bill Clinton's health care reform. They gutted a large extent, some aspects of the Affordable Care Act as well, which started off as allegedly a single-payer process.

But it's really to do with the amount of corporate money, which is engaged in American politics and the elections, and the two main political parties. So even within the Democratic Party, what you've got is a very large amount of corporate donations. So look at Joe Biden, and, and many of the others, Kamala Harris too, and you got that sort of politics playing there. And they don't necessarily want big corporations to be regulated that the way in which these big reforms have would require. So that's, I think, the big blocks to radical reform in the American system.

Sputnik: Of the 10 potential presidential candidates who were on stage last night Do you think any of them could be Donald Trump?

Inderjeet Parmar: When we look at the polling where an organization will put up each of the Democratic candidates against Trump in a head to head, then basically, Saunders and Warren and Biden defeat President Trump and obviously Biden is on tonight. So they're the two leading candidates. And I think one of the key things that they needed to do last night, which I think they did, was that they were a lot fiercer, a lot more combative, against the more moderate other eight candidates.

So I think they showed, and Sanders himself also showed, that they can be quite abrasive. I think that sort of quality may be much in demand because the presidential election for whoever is the Democratic candidate is going to be a bare-knuckle fight if we thought 2016 was brutal. I think 2020 is going to be exponentially even more so.