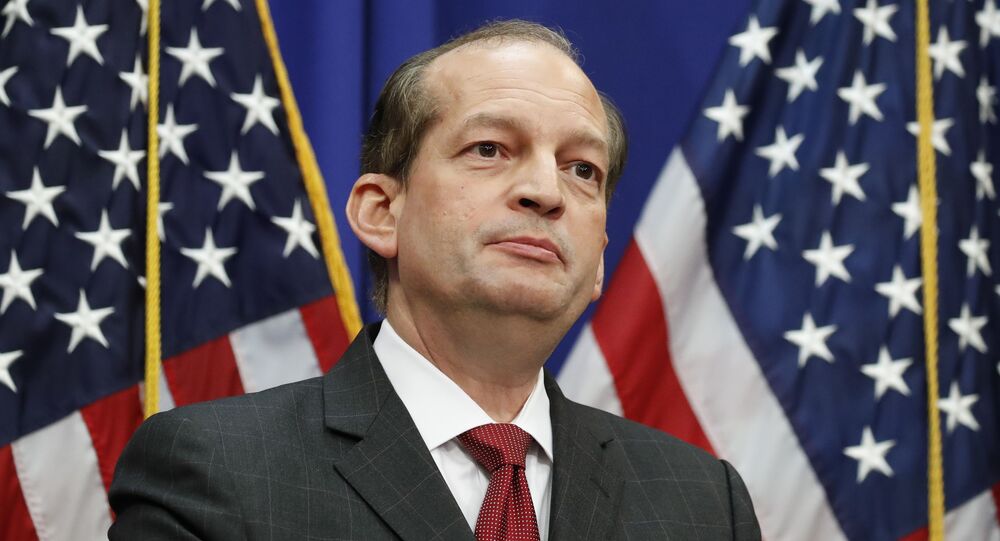 Disgraced former US Labor Secretary Alex Acosta is just one brick in a much larger wall that protects rich men like accused sex trafficker and pedophile Jeffrey Epstein from facing justice by looking the other way, a civil rights lawyer told Sputnik Friday.

Acosta resigned on Friday amid a furor over a plea deal that he struck with Epstein when Acosta was US attorney for South Florida. Last year, the Miami Herald published a blockbuster report accusing Acosta of treating Epstein leniently in the plea deal, which allowed the financier to serve just 13 months in prison and another year under house arrest, despite FBI allegations against him of sexual abuse and the trafficking of almost three dozen young women and girls, Sputnik reported.

During a news conference Wednesday, Acosta adamantly defended his handling of the 2008 plea deal with Epstein. However, following the conference, Barry Krischer, who was the state attorney in Palm Beach County, Florida at the time, contradicted Acosta’s depiction of the case.

"If Mr. Acosta was truly concerned with the State’s case and felt he had to rescue the matter, he would have moved forward with the 53-page indictment that his own office drafted," Krischer said in a statement.

“I think what’s really happening now is the spotlight is on Acosta,” Mara Verheyden-Hilliard, co-founder of the Partnership for Civil Justice Fund, told Radio Sputnik’s Loud and Clear Friday. “He had his press conference; he reiterated much of the same story that he gave at the confirmation hearing [in 2017]. And he, at that time, at the hearing, was saying the action he took was [to hold Epstein accountable]. Otherwise, he could face no time; he wouldn’t have to register as a sex offender. So he said those same things at the press conference, and the former local prosecutor from Florida [Krischer] came out and contradicted him.”

“And so, it does raise the question, of course, that we are all thinking: Is what Acosta was saying true or not true?” Verheyden-Hilliard told hosts John Kiriakou and Brian Becker.

Instead of ending up in prison for the rest of his life, Epstein struck a non-prosecution agreement, which prevented the FBI from further investigating his sex crimes, according to a Miami Herald examination of emails, court documents and FBI records.

“As part of the arrangement, Acosta agreed - despite a federal law to the contrary - that the deal would be kept from the victims. As a result, the non-prosecution agreement was sealed until after it was approved by the judge, thereby averting any chance that the girls - or anyone else - might show up in court and try to derail it,” the Miami Herald wrote in its 2018 investigation.

“This pathetic agreement with Acosta’s and Epstein’s lawyers that allowed him [Epstein] to plead to this tiny little offense of basically like a prostitution charge, as if little girls could be prostitutes, and then also immunity for co-conspirators, which I think is going to become a big issue,” Verheyden-Hilliard explained.

“In New York, where he [Epstein] has his massive … home, and where he had to register as a sex offender, then-deputy chief of [District Attorney of New York County] Cyrus Vance Jr.’s sex crimes unit, Assistant District Attorney Jennifer Gaffney, took the extraordinary postion of going into court and arguing on behalf of Epstein that his classification as an offender should be drilled down from a level 3 to a level 1 sex offender, so he wouldn’t be burdended by reporting requirements as a sex offender in New York. When she [Gaffney] did that in front of [Manhattan Supreme Court Justice Ruth Pickholz], the judge was astonished,” she said.

“I have never seen the prosecutor’s office do anything like this,” Pickholz told Gaffney in 2011. “I have done many [cases] much less troubling than this one where [prosecutors] would never make a downward argument like this.”

“I think what that tells us without debate is that he [Epstein] was extremely well-connected because he was very rich. That of course, is not uncommon; it’s the American way of life,” Verheyden-Hilliard said. “The super-rich, the super-elite, they all have black books that have presidents, former presidents, high ranking officials, royalty. Whether or not all of those people were engaged in the disgusting violation of fundamental human rights this monster was engaged in, we can’t say. Being in that black book doesn’t mean that. But it does show [that] people [like Acosta] did know [about Epstein’s crimes], and everyone’s turning their back on it.”

“Because this is a fundamental issue when it comes to the subjugation and abuse of women. People are willing to turn away, turn their back … When you have someone as rich and powerful as Epstein who is molesting little girls and raping them, [the US justice system says] ‘Hey, it’s cool. We’ll just let that one go. And not just let it go, we’ll help him,’” Verheyden-Hilliard told Sputnik.

In 2015, Epstein’s address book was published online by news outlet Gawker, which obtained the book following its appearance in court proceedings after Epstein’s former house manager tried to sell it in 2009.

“The breadth and the scope of every person who enabled, that participated, that helped him throughout this process [needs to be revealed]. I think there has to be a demand, a demand that is … made by people everywhere that this case touches. People need to be able to see: what were the communications between the District Attorney’s Office and his lawyers? What were the communications within the District Attorney’s Office? What were the communications with the New York Police Department? The breadth of this and the scope of this is astonishing. It says so much about the criminal justice system and how it can support a monster like this while oppressing so many people,” Verheyden-Hilliard said.

Epstein Scandal Rocks White House, Will This Be What Takes Down Trump?

The Mystery of Epstein’s Sweetheart Deal