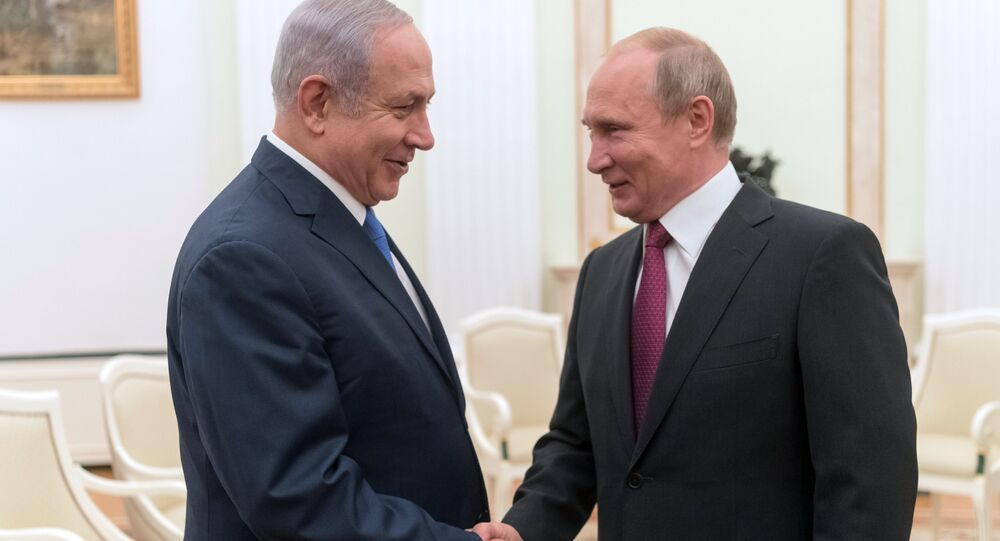 An unprecedented trilateral security summit between the Secretary of the Security Council of Russia Nikolay Patrushev, US National Security Adviser John Bolton and his Israeli counterpart Meir Ben-Shabbat will be held on 24-26 June in Jerusalem, The Jerusalem Post reported on 14 June.

Prime Minister Benjamin Netanyahu came up with the idea for the meeting, which is expected to address Syria and Iran-related issues.

"Today, Russia has become the main and decisive factor in the Middle East, and Netanyahu was the first to foresee this trend, defining Russia as a friendly and stabilising force during the times of the Obama administration, when the US was directly involved in the 'messing up' of the Middle East [and North Africa region] from Egypt to Libya and Syria. Russia, the US and Israel are creating a trilateral commission to solve one of the most difficult problems in the region, which almost became the trigger for an all-out war", says Nelly Gutina, an Israeli author and political commentator.

According to the political commentator, the trilateral meeting will add to Netanyahu's political weight both in Israel and internationally.

While the exact agenda of the upcoming summit remains shrouded in secrecy, the very fact of the establishment of a Russo-US-Israeli trilateral format can be regarded as a success for the parties involved, Gutina believes.

However, she foresees that the summit may trigger discontent among some world players, most notably the EU.

For his part, Israeli publicist and political analyst Avigdor Eskin opined that "there is every reason" for Russia, Israel and the US "to broaden their cooperation" in the Middle East.

According to him, "basically Israeli and Russian interests in Syria are such, that there will be no disagreements".

"The Israeli intelligence take on the Iranian-Russian situation in Syria is that there were clear mutual interests in the past with the shared goal of keeping Syrian President Bashar al-Assad in power," he noted.

Eskin believes that "the Iranian presence in Syria does not serve Russian interests". Israel has repeatedly accused Tehran of beefing up its military presence in the Syrian Arab Republic, something that Iran vehemently denies.

"The summit is very important", the publicist said. "Russia, the US and Israel are likely to cooperate on the major issues and this will enhance peace and tranquillity in the region".

He underscored that, for its part, Israel is highly interested in the improvement of US-Russian relations. "This Israeli initiative serves this goal as well", he added.

'September Snap Vote to Result in Landslide Win for Netanyahu'

Meanwhile, the Israeli prime minister is facing mounting criticism from his opponents after the conservative coalition collapsed in the Knesset, less than two months after Israeli voters cast their ballots.

A new snap election was scheduled for 17 September, after Netanyahu failed to form a majority ruling coalition of at least 61 Knesset members in the late hours of 29 May.

Commenting on the potential outcome of the September snap elections, Eskin presumed that "there is no other realistic option but a landslide victory for Netanyahu".

"The support of Donald Trump is very important and it is only strengthening", the Israeli publicist underscored. "There is also growing and deepening cooperation with Russia. The popularity of President Putin in Israel is beyond any doubt and his friendly ties with Netanyahu will also help the later during the election campaign."

It is believed that Trump's decision to recognise Jerusalem and the Golan Heights ahead of the April general election in Israel contributed to Netanyahu's win.

​However, according to Gutina, the Israeli prime minister's influence within the US Republican party goes beyond his working relations with President Trump.

"The Republican Party and, in particular, Trump rely on the voices of Christian Evangelicals, who have lobbied for the transfer of the US Embassy to Jerusalem and the recognition of the Golan Heights for years, and who are now setting new goals," she noted.

Referring to the pressure exerted on Netanyahu by his opponents, Gutina drew attention to the hastily formed Kahol Lavan centre-left political alliance, which included three former chiefs of staff of the Israeli Defence Forces (IDF). She highlighted that although the Israeli army enjoys considerable prestige in the country, even those serious rivals lost to the Likud leader.

"There are not many national leaders in the world today who protect the sovereignty of their countries against the encroachments of trans-national forces," Gutina said. "Both external and internal forces have been weaponised against such leaders as Donald Trump, Vladimir Putin, Narendra Modi, Viktor Orban and, of course, Benjamin Netanyahu."

Earlier, in April, Netanyahu's Likud won 35 seats – as many as its rival, Benny Gantz's Kahol Lavan. Netanyahu managed to come out on top by rallying support from the Shas Party, the right-wing United Torah Judaism alliance, the Union of Right-Wing Parties, Kulanu, and the secular Yisrael Beytenu Party. However, the latter upset the balance of power at the very last moment in May.