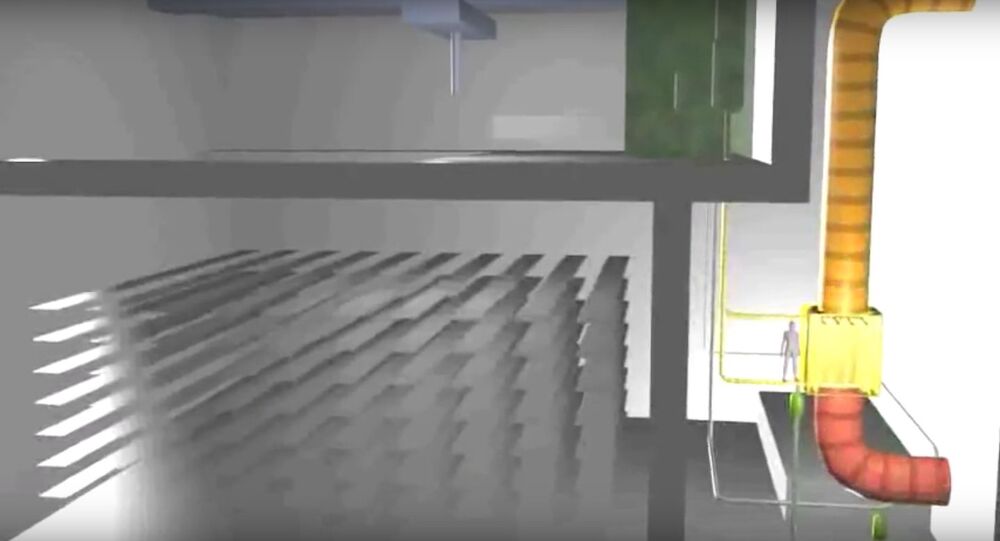 No radioactive waste and no risk of accidents, like the ones at Chernobyl or Fukushima, this is what the developers of the German "dual-fluid reactor" (DFR) promise. Instead of fuel rods, it uses radioactive liquid fuel. In case of an emergency, if a reactor overheats, the fuel liquid streams into storage tanks.

"Atomic Energy? No, thank you!" That's what many thought looking at the accidents at nuclear power plants in Chernobyl or Fukushima, and also taking into account the difficulties associated with the half-life of radioactive waste that is thousands of years.

But what would happen if the core of the reactor couldn't melt, and the terrible consequences of this could be excluded? If the reactor wouldn't produce hazardous long-lasting fission products? The answer may be the so-called "dual-fluid reactor" (DFR), designed by the Berlin Institute of Solid State Physics. At least this is precisely what the developers in Berlin are aiming for.

"Our reactor core cannot melt because the fuel is already melted", nuclear physicist — Goetz Ruprecht — who participated in the development of a dual-fluid reactor said. According to him, radioactive salts or liquefied radioactive metals will be used as fuel.

How it works: two liquid cycles meet in the core

Unlike well-known molten salt reactors, it employs two separate liquid cycles in the reactor's core. In one of them, radioactive fuel circulates, in the other — molten lead, which takes on the heat of the fuel and transports it from the core.

For particularly efficient heat transfer, both fluids move parallel to each other in about 10,000 pipes. Lead transfers further heat the next cycle of hydrogen or carbon, and the latter eventually triggers a turbine that produces electricity.

Also shown in the graph: another cycle (loop) in which short-lived elements circulate and act as a kind of lead preheater. This already gives an indication that this new type of reactor is created with the aim of eliminating waste disposal.

"Long-lived waste occurs due to incomplete combustion", Ruprecht explained. "This is a relic from the times of military use, when, unfortunately, decisions were made in favour of solid nuclear fuel. The reasons for this were strategic because the first pressurised water reactors were used in submarines. The fuel elements, which were used on submarines, were produced ashore".

© Sputnik / Pavel Lisitsyn
Tolerant Fuel: Scientists Learn to Boost Nuclear Reactor Safety
For the military, this option was very practical but fuel elements weren't needed in the civilian industry because of their extreme inefficiency, the expert noted. To specify, he compared this process with a coal furnace in which coal is produced from wood.

In the reactor, figuratively speaking, the heat of wood, turned into coal, would be used, while the coal would be thrown away. "Only 5% of the fuel from the fuel elements is used, and the rest of the material, which can be successfully converted into fission products, but not in a reactor of this type, is not just being disposed of, but must be specially stored".

Nearly 100% of nuclear waste can be burned

The circulation principle solves this problem. During each round, the mixture is prepared, cleaned, and freed from decomposition products then the materials that are not burned are sent to a new cycle. The principle, which uses the separation of two cycles, is comparable to the operation of a filtration plant.

"As a result of long-term use, the material is almost 100% burned", the nuclear scientist said.

© AFP 2021 / JIJI PRESS
Fukushima Daiichi Operator Begins Removal of Nuclear Fuel Rods From Power Plant - Reports
The fuel can be used up to 20 times, and thus the amount of waste can be greatly reduced. In addition, waste from old nuclear plants can also be used in a dual-fuel reactor. Of course, after many cycles, long-lasting nuclides remain, but for them, there's interim storage in the dual-fluid reactor, where they can remain for a maximum of 300 years — in contrast to the hundreds of thousands of years that's needed for the storage of spent fuel rods.

"Only fission products remain, the radioactivity of which falls below that of natural uranium and occurs after 300 years", Ruprecht explained.

In case of an emergency liquid fuel streams into storage tanks

If a reactor overheats, there is a very simple solution: overheated salt will dissolve melt plugs and liquid fuel will stream into storage tanks where it will cool down to a safe temperature. It can be re-uploaded to for new cycle if necessary. The pipes themselves must be made of the most corrosion-resistant material in order to process toxic acids. Ideally, these pipes should last for up to 60 years, in the worst case they should be replaced every 20 years.

Given the small size of the reactor (about three metres in diameter), this will not lead to excessive consumption of materials. The reactor core itself is quite expensive to produce, but it eliminates the need for refurbishment, intricate safety equipment and waste disposal, which should save a lot of money after its construction.

Moreover, after the separation of fission products, precious metals, as well as radioactive isotopes that may be used for nuclear medicine, can be recovered. For example, a DFR is expected to produce 300 grams of molybdenum-99 annually, which would exceed the global demand by four times.

Nuclear power is the most efficient renewable energy

According to Ruprecht, people won't be able to escape the use of nuclear energy.

"My colleagues and I don't see an alternative to it", he stressed. "Because only renewable energy alone won't be able to improve the climate situation. This is a physical fact, it is impossible to build power plants that can bear a really heavy load relying on that".

Natural resources, according to the expert, will be exhausted sooner or later, and only nuclear carriers will remain. "There are enough resources for this. You can dig deeper to extract uranium from the ground or extract it from seawater". Thus, it will be possible to cover the needs of humanity for millions of years.

"You probably know what renewable energy is. This energy is derived from resources, which will last for a long time even after the existence of mankind. These resources include, in particular, atomic energy. We consider it renewable", Ruprecht explained.

© REUTERS / Gustau Nacarino
Spain to Phase Out Nuclear Power Generators by 2035
More funding and research into safety, however, will be required for further development. It will take about ten years to build the first reactor of this type, according to Ruprecht. It will cost about ten billion euros. There are patents for this type of reactor in Japan, Europe, and, since last year, in Russia as well. A permit for its development in the United States is currently in the works.

Spain to Phase Out Nuclear Power Generators by 2035