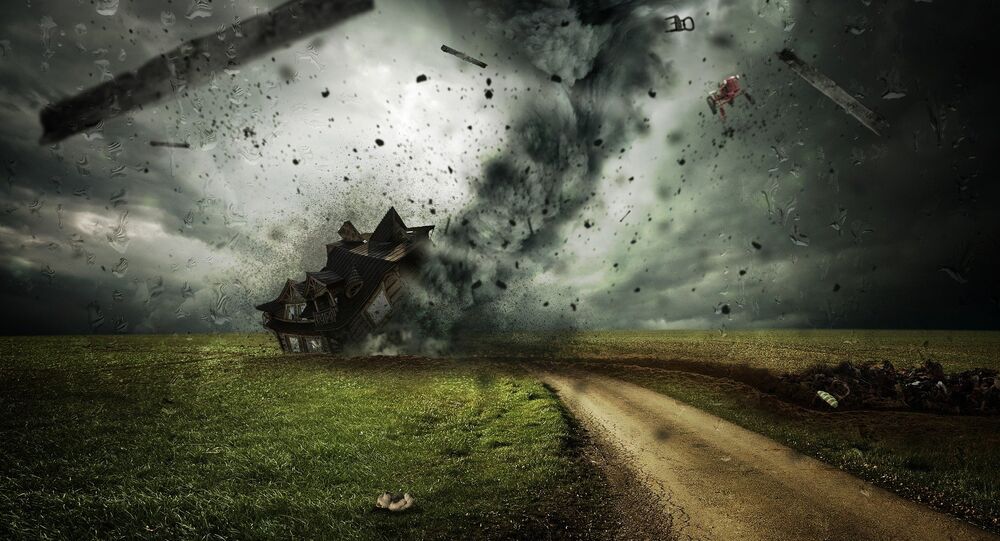 The UN has recently published a troubling report on global warming suggesting that the temperature rise at the North Pole will be greater than anticipated in the coming years and that soon climate change could become irreversible, threatening humanity with massive disasters. Sputnik has discussed the report with two prominent ecologists.

A recent UN report on global warming has shown that our planet could soon reach a "tipping point", when rising temperatures will melt the permafrost layers in the Arctic and release enormous amounts of methane, a greenhouse gas "between 25 and 100 times as powerful as carbon dioxide", into the atmosphere, drastically increasing the rate of global warming.

The consequences of such irreversible heating of our planet could range from massive floods and rising sea levels to social upheavals due to famine, one of the academics interviewed by Sputnik suggested.

Rupert Read, chair of the Green House think-tank and a philosophy academic at the University of East Anglia, says that the report is long overdue, as ecologists like him have been warning about the potential dangers of melting permafrost in the Arctic for some time. He noted, however, that the real danger is far more serious than what was described in the UN paper.

"We should be extremely, extremely concerned about it. This is the gravest news yet on the climate to have come through the UN", he said.

Read complained that although the report was "well-supported" in the scientific community, it has received poor coverage in the media and was rather a sideshow for political news.

"It should be top of the news everywhere in the world. This is about whether we have a future or not. It is as stark and as simple as that", Read said.

The academic further said that humanity is facing an "extraordinary and unprecedented" task to change the situation drastically in a very short period of time, as otherwise the cataclysms will become inevitable. He added that if mankind were to fail at this, life on the planet will become unrecognisable "within a generation".

"[The] Arctic is the worst place in the world for there to be severe warming […] This could destabilise a lot more than just sea levels; this could destabilise our entire climate and could lead to quite rapid temperature rises. So, everything else is a sideshow compared to this", he said.

Read added that humanity will have to devote far more resources than before and work as "a world community" to change the situation. But even if it were to do so, people still need to prepare for failure, as in the academic's opinion, it could already be too late and we need to brace ourselves for "various kinds of breakdowns in our societies".

"We need to deeply adapt, which means we need to be ready for the potentiality of various kinds of partial societal collapses", the academic said.

He also points out that societal breakdowns and rising sea levels won't be our only problems. Rising temperatures are likely to "horrifically destabilise" agriculture around the world, provoking mass famine and, as a consequence, mass migration.

"If we have a series of very severely disrupted growing seasons and that is increasingly likely as you get this kind of extreme Arctic heating kicking in, then we are talking about the potentiality for mass famines which are going to make the kind of things that are happening in Yemen look relatively small scale", Read said.

On the other hand, John Christy, a distinguished professor of Atmospheric Science at the University of Alabama in Huntsville, is highly sceptical of the UN report. He noted that the UN is a government-supported organisation and hence its reports would be biased towards the political goals of the organisation, while facts and observations that do not fit its agenda would be left out.

Christy notes that his and many other scientists' analysis has shown that existing climate model simulations of temperatures in the Arctic are unreliable, especially when it comes to predicting the temperatures of the lower layers.

"The bulk Arctic atmospheric temperature indicates a warming rate of +0.25 C/decade over the past 40 years as well as the past 20 years, so the warming rate is not accelerating.  By 2050, this indicates a rise of another 0.5 to 1.0 is possible in this critical layer", he said.

The professor further pointed out that the planet's rate of warming was higher during the 20th century and added that temperature fluctuations in the Artic are some of the greatest in the world and are mostly the result of natural processes.

"This region has large swings of temperatures on decadal time series which show, for example, it was roughly this warm in the late 1930s and certainly much warmer than today for a period 4,000 to 8,000 years ago", he said.

Still, the professor acknowledged that humanity could be having an effect on the temperature due to greenhouse gas emissions, noting that the main contributors in this area are China and India, while Europe and the US are reducing their emissions year-on-year. Christy doesn't predict any major changes in the global climate in the next 30 years that would result in calamities.