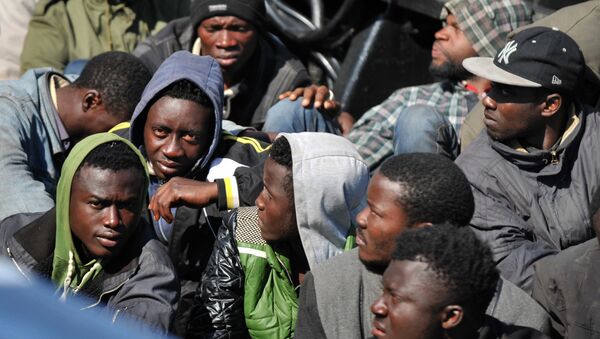 In a spectacular u-turn by the Social Democrats, whose election pledge was to limit immigration, Sweden's new minority coalition government seeks to introduce a so-called humanitarian protection cause that will encompass "climate refugees".

Starting this summer, individuals with so-called "alternative protection needs" will have the same right to family re-unification as refugees, the newspaper Expressen reported citing a cross-party agreement. According to the newspaper's estimate, the new rules will affect 20,000 extra immigrants.

According to the Swedish Migration Board, this step will make Sweden of the EU's "most generous countries" in terms of family re-unification, since even Germany has taken more restrictive steps.

However, the Swedish minority coalition government also seeks to introduce a "humanitarian protection clause", which would entitle even more asylum seekers to stay in Sweden on various grounds. The issue is included in the 73-point agreement between the Social Democrats, the Greens, the Liberals, and the Centre. Among other things, this step will include so-called "climate refugees".

"It can be those fleeing from a climate disaster. It can be those who are gravely ill and know they are about to die, perhaps of a brain tumour, in a few months. It can be an elderly person who has no attachment in their home country and is sickly", Centre Party immigration spokeswoman Johanna Jönsson told Swedish Radio.

According to Swedish Immigration Minister Morgan Johansson, Sweden now has the opportunity to do so, "without ending up in crisis again".

"There must be room for compassion and humanity", Johansson told national broadcaster SVT, in effect re-phrasing former Swedish Prime Minister Fredrik Reinfeldt's plea to his compatriots to "open their hearts", which signalled the start of the recent years' mass immigration.

This marks a drastic change of course by Sweden's largest party, the Social Democrats, whose election promise was to curb immigration following the 2015 migrant crisis.

Johansson further claimed that increased family re-unification is "beneficial for integration" and pledged that the new policy will affect "90 percent of women and children". In 2015, a record year in which Sweden, a nation of 10 million, took in 163,000 migrants, only 29 percent of the newcomers were women.

The centre-right Moderate Party immigration spokesman Johan Forssell slammed Prime Minister Löfven for "saying one thing before the election and doing something else later on". Forssell is against both increased family immigration and extra humanitarian protection.

"We, the Moderates, believe there are reasons to stick to a tighter refugee policy, both because Sweden has taken in many people in a short time and still has extensive integration problems to tackle", Forssell told Swedish Radio.

As of today, over a quarter of the Swedish population has a foreign background, and immigration remains at a higher level compared with its Scandinavian peers. Currently, ethnic Swedes are already a minority in several municipalities, such as Botkyrka or parts of Greater Stockholm.