YouTube has recently removed a Britain First political advert over the organization's alleged violation of the platform's policies. Speaking to Sputnik, the group's leader Paul Golding and British political commentator Nick Griffin shared their views on the video-sharing website's decision, denouncing it as political censorship and discrimination.

"Britain First is at present suing Facebook in Belfast for political discrimination. Once that case is resolved in February, we will launch proceedings against YouTube for their politically motivated censorship," Britain First leader Paul Golding told Sputnik.

On 16 January, YouTube banned an advert posted by the right-wing political organization due to its alleged promotion of hatred, intolerance and discrimination.

The five minute-long video was removed following an inquiry launched by The Guardian, a British left-leaning daily newspaper.

The media outlet wrote that apart from featuring the organization's logo and a link to Britain First's YouTube channel, the video showed "Paul Golding, and a number of supporters confronting volunteers at a Muslim outreach stall in Nuneaton in November 2018".

"YouTube is simply silencing political opinions that are not left-wing or politically correct", Golding said, commenting on the issue. "Every time these left-wing liberals see content that they don't like, they delete it and give the usual excuses: Hate, intolerance, racism, discrimination and so on. But hate speech is simply free speech that the Political Left does not like. This is political bias and censorship at its worst." 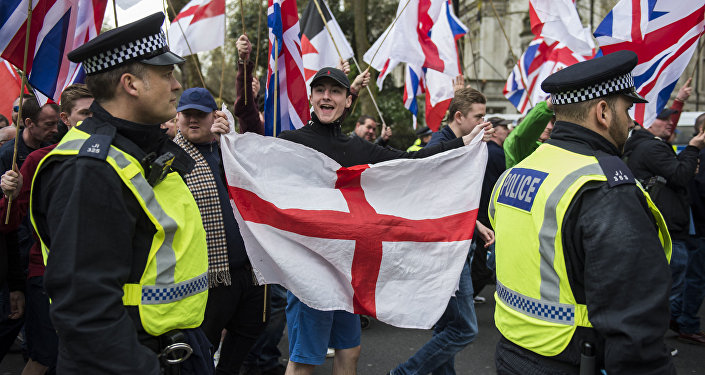 © AP Photo / Ben Stevens
Happy Holidays? Britain First Deputy Leader Suspended From Twitter
According to the group's leader, the video-sharing website "viewed the proposed advert and approved it before it appeared on their network".

In addition to rescinding the approval to the Britain First advert, the media platform has also banned the viewing of over 250 others on the right-wing organization's official YouTube channel.

"Why approve an advert and then change your mind?" Golding asked. "This is naked political censorship. Britain First has millions of supporters around the world and they deserve to see our legal content."

YouTube has yet to respond to Sputnik's request on the matter.

Citing the YouTube move, political commentator Nick Griffin, who also represented North West England as a member of the European Parliament (MEP) from 2009 to 2014, lambasted "liberal Big Tech" for "sweeping repression and censorship".

"Frankly, some of Britain First's activities and publicity are somewhat crude and simplistic; for example their inability to distinguish between Sunni and Shia," Griffin said. "But that does not justify the sweeping repression and censorship to which Britain First is subjected by the British state and by liberal Big Tech. And, of course, confronting an Islamic outreach stall is absolutely within the proper boundaries of free speech and political/religious action. To deny them that right is certainly discrimination".

© AP Photo / Jeff Chiu
State Censorship? Silicon Valley Giants Playing Own Game With Trump Administration, Israel
According to the political commentator, the level of censorship on YouTube is rising rapidly. However, "it has not yet reached the insanely totalitarian level of Facebook or of vital online business and campaign tools such as Paypal, Stripe and Patreon" he remarked, while contending that the video-sharing platform is "catching up fast".

Griffin referred to US President Donald Trump's August tweets about "Big Tech censorship of 'the right'", bemoaning the fact that the president "has still done absolutely nothing to stop it".

The commentator believes that "this is not just terribly wrong, it is also suicidal, because his entire base is being censored and defunded, and a major reason for this is that the US liberal elite and the Deep State are working relentlessly to destroy any possibility of effective popular resistance when they move to impeach and destroy Trump, just as their counterparts in Britain are doing in order to override and reverse Brexit".

Griffin opined that "the fact that YouTube posted the video and then removed it shows that they are responding to external pressure".

© Photo : Facebook / Alternativ för Sverige
YouTube Deletes Alternative for Sweden's Video, Threatens to Take Down Account
He insisted that "the latest attack on Britain First is just a small part of the overall liberal elite campaign to silence every last dissident voice online" prompted by the Brexit vote and, earlier, Trump's win in the 2016 presidential election.

As a result, they kicked off a "co-ordinated effort to re-establish the controlled mainstream media monopoly on creating news and influencing public opinion", Griffin said.

According to the political commentator, there is nothing unusual about this in Britain and the entire Western world today: "Patriots, anti-globalists, conservative voices, anti-LGBT campaigners, pro-Russians and traditional Christians are all facing an endless wave of repression, censorship and deplatforming attacks".

YouTube Goes Down for Many Users Worldwide, Company Working to Resolve Issues