‘American System is Desperate for an Enemy’ - Scholar on Bolton's Accusations

US National Security Advisor John Bolton in a speech unveiled the US strategy to counter Chinese and Russian influence in Africa. He accused Moscow and Beijing of deliberately and aggressively targeting their investments in the region to gain a competitive advantage over the US.

The American official claimed that China was using bribes, opaque agreements and the strategic use of debt to hold states in Africa captive to Beijing's wishes and demands. In addition, Bolton announced a new program, "Prosper Africa", to support American investment across the continent and provide alternatives to Chinese projects.

Sputnik: What do you make of the timing of Mr Bolton accusing Russia and China and announcing the new American programme in the region?

Ian Taylor: John Bolton is a kind of a hard-core realist who sees everything in terms of geopolitics and grand strategy. His type of approach to the continent is part of the course with somebody like him. It is rather curious though that they are lumping Russia and China together as being some sort of strategic threat to American interests in Africa, given that Russia itself, its investments in the continent and its political profile is much less than that of China. So, the coherency of the approach is problematic from the start.

Sputnik: In what way can these statements impact the already strained relations between Washington and Beijing?

Ian Taylor: The American system, the military-industrial complex, or whatever you want to call it, is absolutely desperate for an enemy. It needs enemies, it needs targeted opponents — Russia has been playing that role. Everything that happens in the world today seems to be you know whether it is football results or poor weather, is the fault of Russia. China is now being lumped together as well.

© AFP 2019 / ASHRAF SHAZLY
Russia Supports African Union in Establishing Regional Stability - Commissioner
In order to understand this type of rhetoric, we have to look at the domestic developments and how the domestic set up in the United States operates in terms of budget claims, in terms of where the money is spent and in terms of where political influence rests. And constructing new enemies is nothing new; it has always been part of the system. And I think this is just a further evidence of this kind of a mentality. In Africa though, of course, the United States simply cannot compete with China. So it is kind of a losing strategy from day one, I would say.

Sputnik: Do you think this kind of statement by a senior executive in the Trump administration is going to hold any sway whatsoever in China? I mean it is not going to affect anything, from my point of view.

Ian Taylor: No, it is not going to affect anything and there is nothing the Americans can do. I mean look, what do African governments, what do African countries need? They need development and they need infrastructure to help facilitate that development; they need new railways, they need new ports, etc. Who is going to provide that? Let's say we have an open tender for a railway somewhere in Africa — which countries and companies are going to be willing to put forward some sort of serious intent for that? 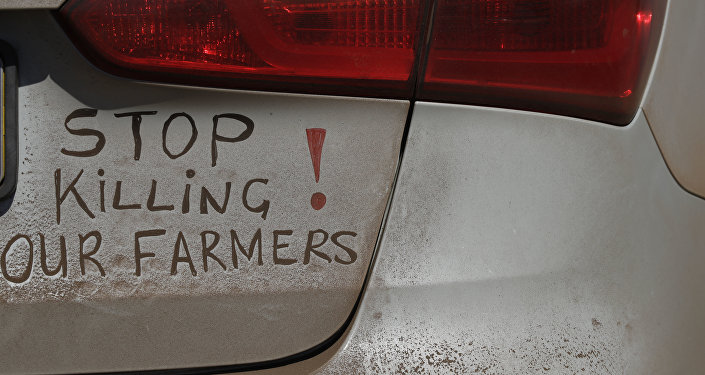 © AP Photo / Themba Hadebe
South Africa Tensions Boil as Group Calls on Blacks to Kill White Men, Women, Children, Dogs and Cats
At the moment it is basically the Chinese, to a lesser extent the Turks, sometimes the Indians. But no American private corporation is interested in building a railway from X to Y in Africa. So the idea of competing with Chinese influence at that other level is just a non-starter and there is nothing the Americans can do in that respect. The American foreign policy, certainly the economic policy towards Africa is pretty much private companies. African leaders are not stupid and then they realise what is going on.

I would imagine that there will be a strong reaction against this. Get the idea that we are going to have some sort of a new Cold War played out on the continent between China and the United States or China and Russia and the United States. It is not something that is going to be welcomed by most Africans. Everyone knows what happened last time that those types of dynamics played out: we had proxy wars, we had all sorts of disasters; we had different sides propping up weird and wonderful dictators with no reference to anything other than geopolitics.

So this is absolutely the last thing the continent needs. It is rather depressing, that it seems that under this current regime in [Washington] DC we are returning to this kind of a rationale.

Sputnik: Is China damaged by these particular negotiations, the reduction in the benefits that they are actually giving or receiving from America? They are realigning their trade agreements now.

© AP Photo / Emilio Morenatti
France and Germany to EU States: Either Pay or Host Refugees
Ian Taylor: No, it is not going to derail Chinese economic growth. And I think actually both sides are hurt by these types of trade wars. I don't think these trade wars are put forward by Trump from any real serious economic understanding of the dynamics. The fact is that a huge amount of the so-called deficit between China and the United States is caused by American corporations like Target and Walmart importing billions of dollars' worth of cheap Chinese —made products back to the United States. But these are made by American companies or subcontracted by American companies.

So I don't see China's long-term trajectory being damaged by this at all. The only thing it is going to do is that it is going to damage both sides' economic interests, it is going to damage the diplomatic relationship between both sides. And it is making the United States foreign policy agenda look just made up on the hoof, you know, with no real kind of a strategic rationale or even economic rationale behind some of these decisions. So, I think overall it damages actually the United States' reputation rather than China's.

The views expressed in this article are solely those of Ian Taylor and do not necessarily reflect the official position of Sputnik.

Group Wants US Out of Africa; GA Voter Purge Lawsuit; US Plot to Weaken Iran?

Fashion Designer Gets Nominated as US Ambassador to South Africa – Reports