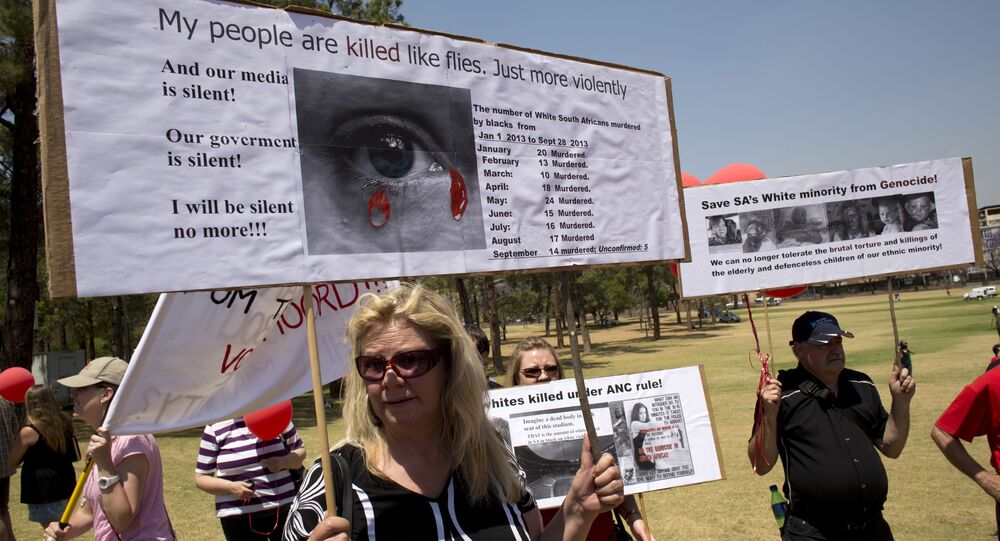 The man, the racial hatred comments are attributed to, is the Black First Land First founder Andile Mngxitama. Amid growing tensions around the plans to force white farmers to give up their land in favour of the black population, his party has been involved in a number of scandals, including accusations of intimidating journalists.

The South African Human Rights Commission (SAHRC) is planning to sue Black First Land First’s leader Andile Mngxitama for his comments during a recent rally. It’s been reported that the politician called on his supporters in Potchefstroom, North West to murder 5 white people for each black person killed in taxi violence.

Mngxitama had his Twitter account suspended while attempting to backtrack on his comments, tweeting that "If you Kill black people. Will kill you too!!!" [sic], invoking white South African billionaire Johann Rupert, whom he had accused of paying "taxi bosses" to spark black on black violence during his speech.

The SAHRC announced they are going to file a suit against Mngxitama in the country’s Equality Court, saying he went beyond the limitations of free speech. Earlier the African Christian Democratic Party (ACDP) also reported to police about the politician’s "advocating racial hatred, and for the incitement of violence to do grievous bodily harm" as well as complaining to the Human Rights Council and Equality Court.

Meanwhile, the trade union Solidarity has decided to ban the BLF from 2019 general elections, filing a corresponding motion with the Electoral Commission of South Africa.

The left-wing pan-Africanist revolutionary party BLF, founded by Mngxitama, has already been involved in a number of scandals and has been accused of attacking journalists or fostering racial hatred.

In 2017, BLF supporters protested at the Johannesburg house of Tiso Blackstar’s editor, whose outlet published materials about the party’s donors, and attacked his fellow journalist, while the party issued a target list of white journalists, IOL reports.  Earlier this year, a party spokesman also told The Citizen newspaper that they considered white existence itself "a crime" while repeating the party's slogan "land or death”. 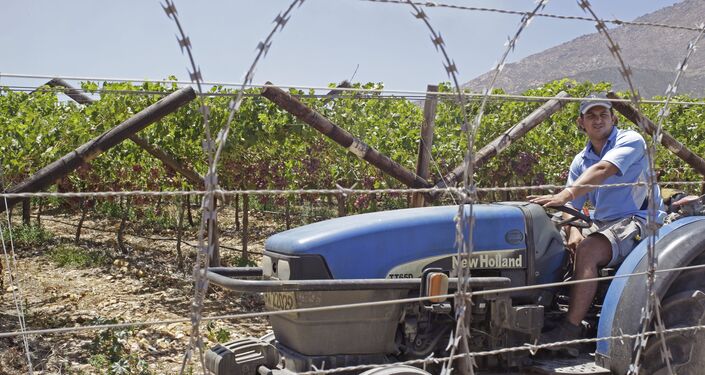 © AP Photo / Schalk van Zuydam
A unidentified farmer looks at burning grass lands that was set alight next to his farm near the town of De Doorns, South Africa, Friday, Jan 11, 2013

Long-standing tensions between white and black South Africans escalated in August after President Cyril Ramaphosa said that the ruling African National Congress party would push ahead with plans to legalise the expropriation of land without compensation by making modifications to the country's Constitution, which currently demands "just and equitable" payment for the redistribution of land. Around 73 percent of South Africa's agricultural estates belong to white farmers, who make up just 10 percent of the country's population.

Much of this land was concentrated in white hands during the Apartheid regime. The government has made efforts to improve the situation since the end of Apartheid in 1994, but many among the country's black majority have criticised the slow pace of reform and demanded more radical measures.

Land Reclamation Coming to S Africa in 2019, White Farmers Land to be Seized