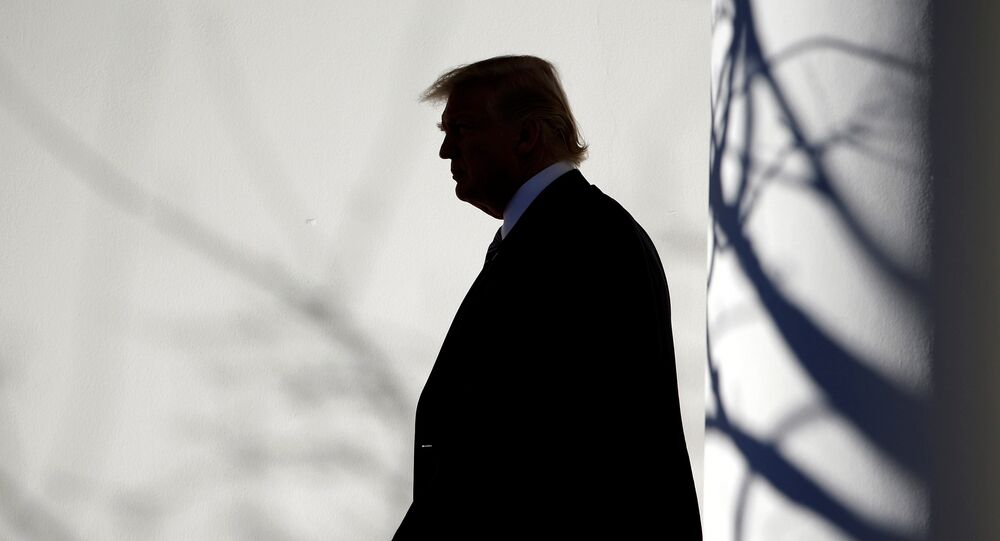 The media fuss surrounding the Trump Tower Moscow project that was never implemented may further exacerbate Russian-American relations, Sputnik contributor Ivan Danilov wrote, sharing his views on what was really behind the much-discussed initiative

The Trump Tower Moscow "plot" was nothing less than a CIA-backed provocation, deems Ivan Danilov, a Russian economist and Sputnik contributor.

"If we separate wheat from the emotional chaff of US media, we would get the following: immediately after [Donald] Trump becomes a presidential candidate, an agent of several US intelligence agencies, [Felix Henry] Sater, who had been earlier embedded in Trump's business structure, came to then [Trump's] lawyer [Michael Cohen] with a 'brilliant idea': to give [Vladimir] Putin a penthouse in order to turn the Russian president into an element of advertising", Danilov wrote in his latest op-ed.

The economist underscored that one important link is missing in this chain, stressing that no one had confirmed so far whether the American president knew about the Sater-Cohen plan and endorsed it.

© REUTERS / Jonathan Ernst
US President Decries Speculations About Trump Tower Moscow Plans as ‘Witch Hunt’
If this link is missing, the whole "chain" snaps, according to Danilov.

On 17 May 2018 BuzzFeed News reporters  Anthony Cormier and Jason Leopold broke that Trump's two "key business partners" had been secretly negotiating a deal aimed at building "an icon of the Trump empire — the Trump World Tower Moscow" amid the 2016 presidential campaign.

On 29 November, Cormier and Leopold unveiled ex-Trump business associate Sater's plan "to give a $50 million penthouse at Trump Tower Moscow to Russian President Vladimir Putin" as part of the aforementioned real estate initiative. Sater discussed this plan with Trump's personal attorney Michael Cohen, who hailed the idea at that time.

"My idea was to give a $50 million penthouse to Putin and charge $250 million more for the rest of the units. All the oligarchs would line up to live in the same building as Putin", Sater told BuzzFeed News.

However, the biggest news about the proposed real estate deal is that it was considered "during the 2016 primaries and caucuses," The Washington Post highlighted on 30 November, stressing that the former Trump lawyer earlier lied that the endeavour had been brought to naught before the primaries.

"This provides more evidence that the project was being rather seriously pursued with potential assistance from the Russian government, despite Trump's presidential candidacy and despite Trump's regular assurances that he didn't deal with Russia", the Post claimed.

In addition, Cohen "did recall" that in or around January 2016, he received a "response" from Dmitry Peskov, the Russian president's press secretary, Special Counsel Robert Mueller wrote on Thursday.

For his part, Kremlin spokesman Dmitry Peskov revealed what sort of response he gave to Trump's business associates after receiving Cohen's letter that was sent to his official email.

"They were asked what the presidential administration has to do with this and if they realized who they contacted", the Kremlin spokesman recalled. "They said they wanted to build a house… They were told that the administration is not engaged in construction projects and we will be happy to see them at the St. Petersburg Economic Forum if they are interested in investment".

© AP Photo / Jae C. Hong
Most American Voters Think Trump Likely to Win Re-Election in 2020 - Poll
The case does not appear to be a smoking gun. Commenting on the media fuss, a source close to the US president told Fox News that the Sater-Cohen plan to provide the Russian president with a penthouse would have been a "stupid idea", and emphasised that Trump had "never heard" about it.

On 12 March, 2018, Cormier and Leopold reported that Felix Henry Sater (born Felix Mikhailovich Sheferovsky), 52, had "spent more than two decades as an intelligence asset who helped the US government track terrorists and mobsters".

Given all of the above, the whole case looks like a "three-penny provocation" aimed at discrediting President Donald Trump, Danilov pointed out.

"One can presume that the next phase of the scandal will be the publication of Sater and Cohen's photographs on the side-lines of the SPIEF or near the venue of the forum in the American media, which, from the point of view of US investigators, may well prove that the 'Kremlin and Trump plot' did take place", he noted, bemoaning the fact that this "three-penny provocation" could seriously affect the already complicated US-Russian relations.

The views and opinions expressed by Ivan Danilov do not necessarily reflect those of Sputnik.