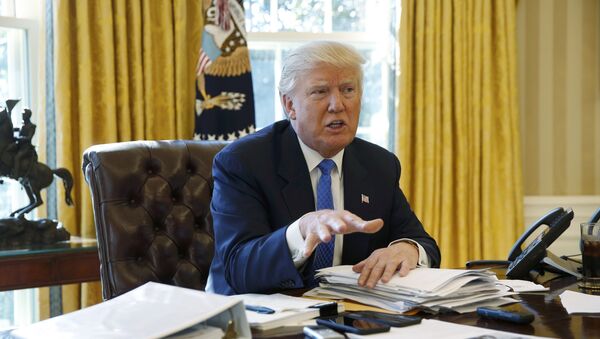 MOSCOW (Sputnik) - US President Donald Trump on Friday decried the ongoing speculations about the Trump Organization’s plans to construct a building in Moscow as a "witch hunt," stressing that he had only "looked lightly" at such an option and took no action.

The speculations about the plans to construct a building in Moscow flared up on Thursday after Trump’s former lawyer Michael Cohen pleaded guilty to lying to a congressional committee investigating allegations of Trump-Moscow collusion and Russian meddling in the 2016 US presidential election.

Cohen Pleads Guilty to Perjury of Congress, Trump Calls Him Liar
Cohen claimed that he had discussed the project with Trump three times during the election campaign, thereby backtracking on his 2017 testimony to Congress that all the talks on the issue had been completed in January 2016.

In August, Cohen pleaded guilty to other federal charges involving his businesses, bank fraud and his campaign work for Trump.

The Cohen case is part of Special Counsel Robert Mueller's investigation into purported Russian interference in the 2016 presidential campaign, something that Moscow has repeatedly and categorically denied.