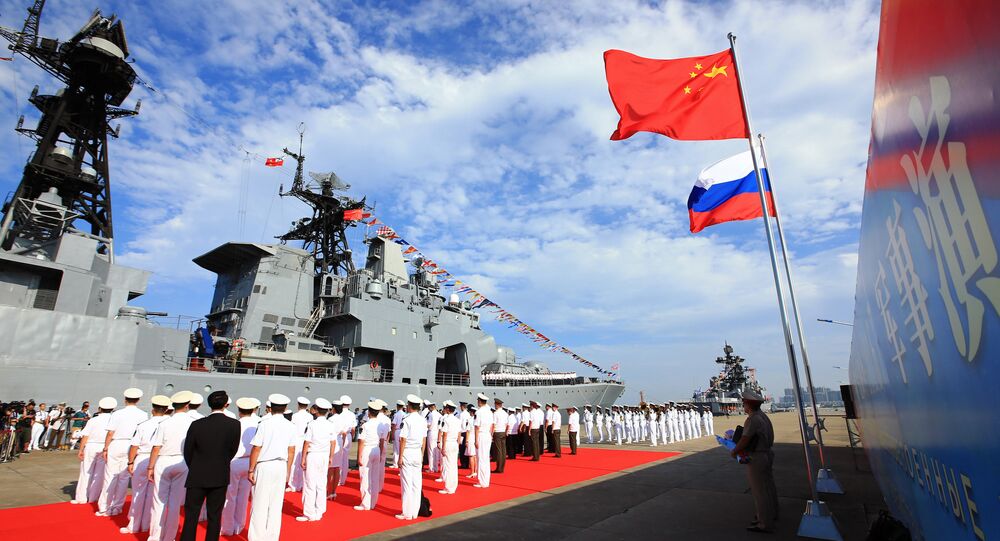 China and Mongolia are set to take part in Russia’s upcoming Vostok-2018 military drills, the largest in decades, as “a response to their national security strategy as well as a response to US and NATO posturing” about great power competition, an international affairs and security analyst told Radio Sputnik Tuesday.

Vostok-2018 "will be something of a repeat of Zapad-81, but in some senses even bigger," Russian Defense Minister Sergey Shoigu said, according to CBS News, referring to the 1981 war games held by the Soviet Union in Eastern Europe.

The Vostok ["east"] exercise is one of four large-scale annual training exercises conducted by the Russian armed forces. The others are "Zapad" [west], "Central" and "Caucasus."

The maneuvers are expected to involve almost 300,000 troops, more than 1,000 aircraft, two of Russia's naval fleets and all its airborne units, Shoigu said Tuesday. In addition, Xinhua reported China is sending 3,200 troops and about 900 weapons, while the Mongolians are sending an unknown number of troops. The maneuvers will last from September 11 to 15.

Kremlin spokesman Dmitry Peskov explained the war games as essential, telling reporters Tuesday: "The country's ability to defend itself in the current international situation, which is often aggressive and unfriendly towards our country, means [it] is justified."

However large Vostok-2018 turns out to be, it's "just the latest in a series of war game escalations," international affairs and security analyst Mark Sleboda told Radio Sputnik's Loud & Clear Tuesday, noting both sides are "preparing for great power conflict."

​The United States' Nuclear Posture Review, released in January 2018, indicated that "great power competition, not terrorism, is now the primary focus of US national security," US Defense Secretary James Mattis said in a speech introducing the document, Reuters reported. He indicated specifically Russia and China as adversaries, which he called "revisionist powers" that "seek to create a world consistent with their authoritarian models."

"From these type of exercises, it is obvious that Russia and China feel the same way," Sleboda told hosts Walter Smolarek and Brian Becker. He noted that Mongolia would be participating, too, "another interesting indication of a greater cohesion of the Eurasian area, militarily and politically."

He noted that, while past joint exercises had taken place under the aegis of the Shanghai Pact, a 2001 agreement that according to China Daily "features mutual trust, mutual benefit, equality, consultation, respect for cultural diversity and pursuit of common development," the inclusion of foreign military forces in the Vostok drills, which have always been Russia-only, was significant.

Sleboda told Sputnik the friendship between Russia and China, which has been off and on since the 1940s, wasn't permanent, but he noted it was "increasing, and it shows no signs of any deterioration. It shows the exact opposite," not just militarily, but in "all spheres."

The analyst noted that despite the short shooting war that developed in the Amur River basin — which forms a border between Russia and China — in the spring and summer of 1969 and the United States' efforts to exacerbate the hostility between the two countries in the 1970s, things have changed a lot, and the countries grew closer together once the Cold War was over.

"Beginning in the late 1990s, with [Russian President Boris] Yeltsin, and continued to a much greater degree by [Russian President Vladimir] Putin, there has been an incredible rapprochement between Russia and China," Sleboda said, such as settling boundary disputes and demilitarizing them.

"Just over the last year, they've actually begun joint missile defense exercises as well — which indicates that Russia and China don't see each other, anymore, as a strategic nuclear threat" and that "they foresee that any strategic nuclear conflict that embroils one would, naturally, involve both."

Sleboda noted that, despite their use of the term "strategic partnership" rather than alliance or bloc, terms that have largely been abandoned since the end of the Cold War, it's very clear that Russia and China increasingly see their futures as bound together.

He quoted from an editorial republished on China's official People's Liberation Army website, noting its use of the term alliance:

"Objectively the purpose of the large military drills by China and Russia is self-evident. Some hegemonic powers target China and Russia as their biggest threats, giving heavy blows to the two countries in political, economic and military areas. Such actions have severely threatened regional and even global peace and stability. Therefore, China-Russia alliance is a reasonable stance against the hegemonic impulse and for safeguarding peace and stability of the region and the world."

"That's a big political step forward," the analyst said, "and it's a clear indication to the US that it's a response to their national security strategy, as well as a response to US and NATO posturing in the South China Sea, in the Taiwanese Straits, as well as these ever-increasingly-large military exercises and the permanent stationing of troops that we are seeing on Russia's western border."

This coming October, Norway, on Russia's western border, is scheduled to host the largest NATO drills in decades, Sputnik reported. From October 25 to November 7, 35,000 NATO soldiers will carry out the Trident Juncture exercises.