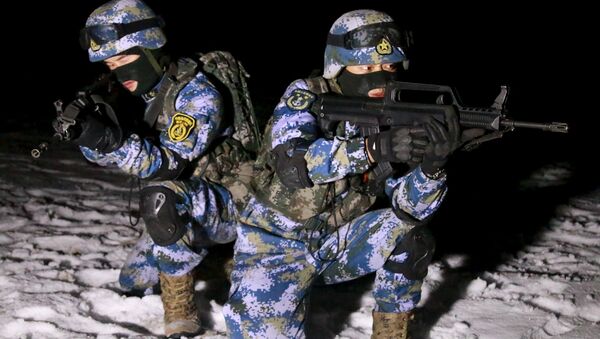 © REUTERS / CNS
Subscribe
International
India
Africa
The Russian military and elite units of China’s People’s Liberation Army are slated to conduct war games soon in what some are calling “proof of the sustained bromance between the two forces.”

From the final days of August through mid-September, approximately 3,200 soldiers within the Chinese army will train with Russian and Mongolian personnel, Asia Times reported Wednesday. According to the report, the deployment of Chinese soldiers symbolizes concrete evidence of de facto defense cooperation between Moscow and Beijing.

It's unclear how many Russian forces will be involved in the extended training exercises, which have been dubbed Vostok 18; however, Russian Defense Minister Sergey Shoigu said this week it would be the largest drill in nearly 40 years.

Russian President Vladimir Putin may inspect the status of the exercises during a parade.

While Russia's previous Vostok 10 exercises in northeast Asia in 2010 were viewed as a "show of force" against China, Vostok 18, Sino-Russian cooperation at the International Army Games in Russia and recent joint drills held earlier in August "under the auspices of the Shanghai Cooperation Organization" evince a "sustained bromance" between the two nuclear powers, Asia Times noted.

According to the Chinese military's English-language website, eng.chinamil.com.cn, Vostok 18 marks the first time PLA forces have been incorporated into the drill. Vostok exercises are one of four large-scale training exercises practiced by the Russian military annually. The others are "Zapad," "Central" and "Caucasus."

"Unlike other previous China-Russia joint military exercises, the series of ‘Vostok' military drills used to be conducted by Russia only," an unnamed Chinese military source told eng.chinamil.com.cn Wednesday. The cooperation indicates stronger Russia-China cooperation on traditional security concerns as well as a "comprehensive strategic partnership of coordination" that is "further deepening in the military and security fields," writers Guo Yuandan and Liu Yupeng noted.