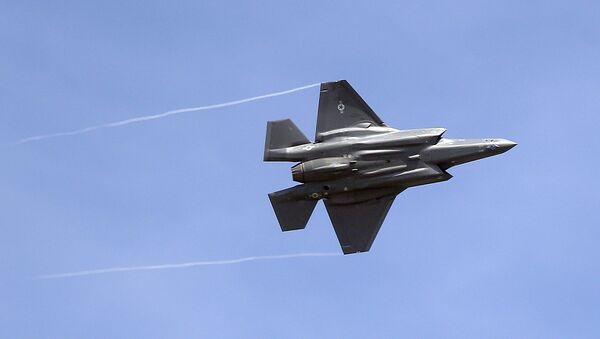 “Modernizing our dual-capable fighter bombers with next-generation F-35 fighter aircraft will maintain the strength of NATO’s deterrence posture and maintain our ability to forward deploy nuclear weapons, should the security situation demand it,” the report, compiled by the Office of the Secretary Defense, states.

The document clarifies that Washington "would only consider the employment of nuclear weapons in extreme circumstances to defend the vital interests of the United States, its allies and partners." Nevertheless, those extreme circumstances could include non-nuclear strategic attacks against the US or its interests, according to the report. Earlier this week, the Pentagon walked back reports that a devastating cyberattack could be countered by a nuclear strike under the new policy.

The F-35 has a long history of technical difficulties and exceeding budgets. The F-35 does not currently have the capability to fire nuclear weapons, but commanders involved with the F-35 Program Office have estimated the capability will be there between 2020 and 2022. US Air Force Brig. Gen. Scott Pleus has said it would "definitely be possible" to accelerate the timeline for deploying nukes on the aircraft should the need arise.

Specifically, the F-35 will take on the F-15E's responsibility for carrying B-61 gravity bombs, the posture review states. "The current non-strategic nuclear force consists exclusively of a relatively small number of B61 gravity bombs carried by F-15E and allied dual capable aircraft (DCA)," the report states, referring to the reliance on F-15 to perform "fighter" and "bomber" missions.

"The United States is incorporating nuclear capability onto the forward-deployable, nuclear-capable F-35 as a replacement for the current aging DCA," the NPR says, adding that "in conjunction with the ongoing life extension program for the B-61 bomb, it will be a key contributor to continued regional deterrence stability and the assurance of allies."

In introducing the Nuclear Posture Review, Defense Secretary James Mattis wrote that Moscow is advancing its own nuclear capabilities. But "even more troubling has been Russia’s adoption of military strategies and capabilities that rely on nuclear escalation for their success. These developments, coupled with Russia’s seizure of Crimea and nuclear threats against our allies, mark Moscow’s decided return to Great Power competition."

However, the United States "seeks stable relations" with Russia and China, not enmity, he added.

The Trump administration has put the option on the table to continue with nuclear weapons testing if this becomes necessary. "The United States will not resume nuclear explosive testing unless necessary to ensure the safety and effectiveness of the US nuclear arsenal, and calls on all states possessing nuclear weapons to declare or maintain a moratorium on nuclear testing," the document said.