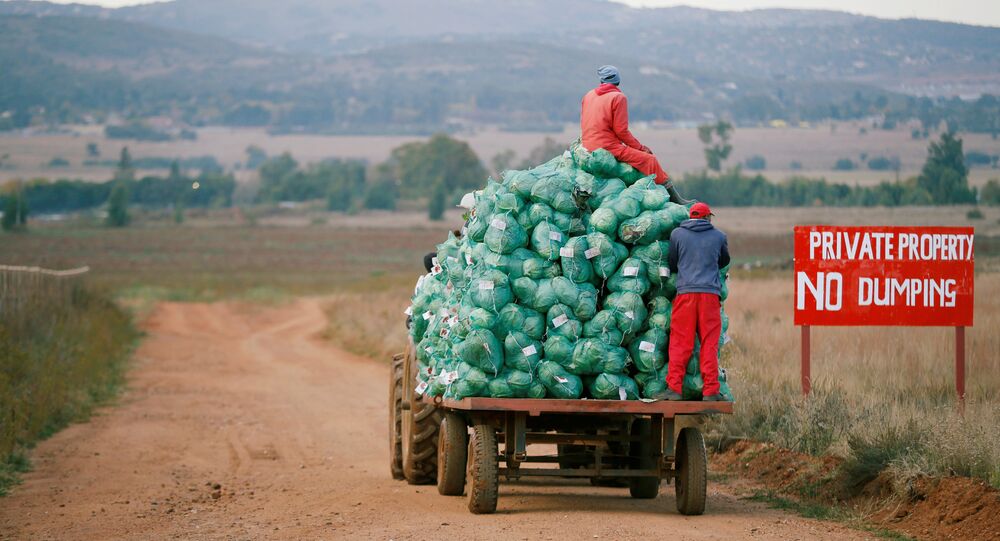 South Africa's ruling ANC party plans to alter the country's constitution to allow land to be expropriated from white farmers without compensation. Sputnik discussed the issue with Seyed Ali Alavi, a teaching fellow with the Department of Politics and International Studies at the University of London's School of Oriental and African Studies.

Recalling that land reforms and related legislation "are often controversial and mainly politically driven" from a historical point of view, Alavi called South Africa the "most industrialized economy" in the continent, which he said "is unlikely to jeopardize investments in its agricultural industries" in light of the upcoming land expropriation.

In this context, he referred to the complicated economic situation in neighboring Zimbabwe, which Alavi said is unlikely to be repeated in South Africa.

"The political fabric in South Africa is more open to the world than Zimbabwe under Mugabe when land reforms were imposed [there], so I would not expect South Africa to turn to a 'second Zimbabwe'," Alavi underscored.

He attributed a decision by South Africa's ruling African National Congress Party (ANC) to consider land reforms to the upcoming elections in the country, scheduled for next year.

"The opposition won control of several key municipalities within the major cities of Johannesburg and Pretoria, in 2016. The ANC aims to regain the seats that it lost to the opposition. The proposals that signal a shift towards radical land reform has already raised concerns amongst some foreign investors and it may have downhill effects on South Africa's fiscal charts," Alavi pointed out.

In this vein, he cited the ANC as saying that the implementation of the proposed land reform will help boost the country's economy and reduce unemployment in its rural areas.

Currently, the South African government, led by President Cyril Ramaphosa from ANC, is looking into constitutional reform that would let land be expropriated from white farmers and handed to black owners without compensation.

Earlier this week, Ramaphosa said that the ANC will "finalize a proposed amendment" to the constitution in a measure which he described as "critically important" to the country’s economy.

Even though South Africa passed a law allowing land expropriation in 2016, Ramaphosa insisted that the constitution should be "more explicit" on the issue.

The governing African National Congress supported, but amended the motion, with Ramaphosa vowing to speed up the transfer of land from white to black owners.

The views and opinions expressed by Seyed Ali Alavi are those of the analyst and do not necessarily reflect those of Sputnik.