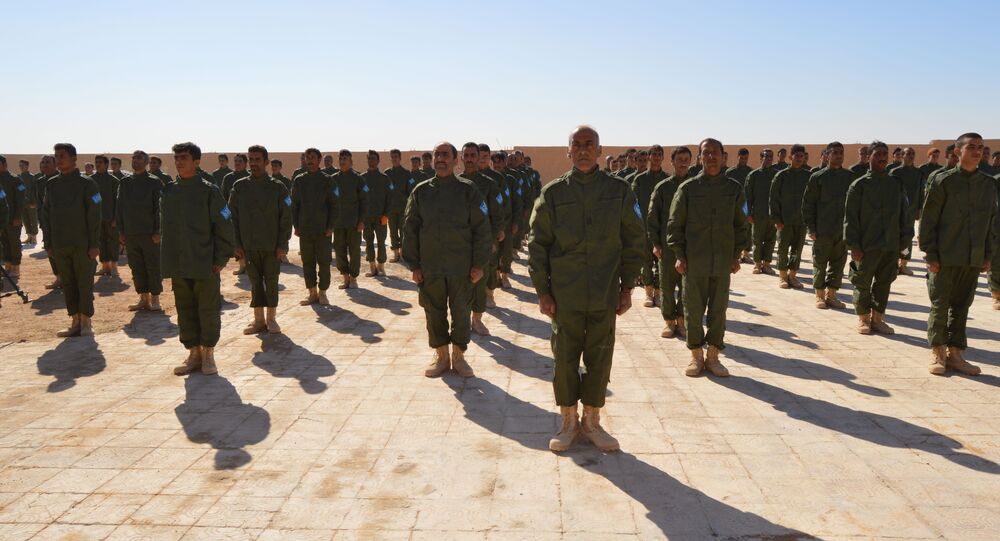 The US is unlikely to withdraw from Syria and halt its support to the Kurdish-dominated Syrian Democratic Forces (SDF) in the north of the country, as the two parties concluded a 10-year agreement on military assistance, a representative of the Syrian Democratic Union Party (PYD) told Sputnik.

"I believe that the US will not withdraw from Syria since this step would not meet their interests," Eli presumed. "Besides, there is an agreement on military assistance between the US and the SDF for a period of 10 years. Therefore, Washington will provide support to the SDF during this time."

According to the PYD leader, "The US brought the issue of the pullout from Syria to its agenda to exert pressure on Arab countries and receive funding from them."

For his part, a high-ranking SDF representative also refuted reports regarding the withdrawal of US troops from the region in an interview with Sputnik.

"American representatives constantly tell us that they do not intend to leave Syria," he emphasized. "If they had such plans, they would have gradually reduced their military presence in the region. On the contrary, the US is beefing up its presence, building new military bases in the Deir ez-Zor region, boosting its military activity in Manbij and on the Syrian-Iraqi border."

© AP Photo / Bassem Mroue
Pullout of Iranian Forces, Hezbollah Units From Syria Out of Question - Damascus
He further underscored that the SDF "has concluded a number of agreements with the US."

"If the United States were going to withdraw its troops from Syria, they would not have made such a large military investments in the region," the SDF representative added, referring to a number of US military bases in northern Syria. He refused to specify the exact number of bases, as well as the number of military personnel stationed there for security reasons.

According to some estimates, there are about 22 military bases and 5,000 American troops deployed in SDF-held territories in northern Syria.

Previously, a number of reports emerged in the US media claiming that the Trump administration had ceased assisting northwestern Syria and was preparing to withdraw from the region.

© REUTERS / Rodi Said
Arms Provided to SDF 'Limited, Mission-Specific' - US-Led Coalition
Thus, CBS News reported May 18 that Washington had withdrawn all its aid from northwestern Syria, citing a State Department official, who told the media outlet that "US assistance for programs in northwest Syria are being freed up to provide potential increased support for priorities in northeast Syria, as will be determined by the outcome of the ongoing assistance review."

The media outlet also claimed that the US "is now completely withdrawing" from Syria's northwest that had been cleared of Daesh (ISIS/ISIL)*. It also referred to the fact that earlier the State Department stopped funding "groups like the White Helmets" while seeking to focus solely on the US fight against Daesh.

It was reported on March 30 that President Donald Trump had ordered the State Department to suspend over $200 million in aid for Syria.

The news emerged after Trump's controversial remark that he sought to pull US troops out of Syria as soon as possible.

Meanwhile, on May 20, the Special Operations Joint Task Force — Operation Inherent Resolve (SOJTF-OIR) commanding general, US Maj. Gen. Jamie Jarrard, told Sputnik that the military assistance provided to the Kurdish-dominated SDF by the US is "limited" and "mission specific."

"We regularly review adjustments to the military support we provide to our SDF partners based on the military requirements of our defeat-Daesh and stabilization efforts," Jarrard said.

It was also reported that new US bases were deployed in the Manbij and Deir ez-Zor regions.

Speaking to Sputnik in early May, Sharfan Darwish, a spokesman for the Manbij Military Council of the US-backed Syrian Democratic Forces (SDF), noted that the American base in Manbij was set up amid Turkish threats to launch an offensive against this northern Syrian region.

Turkey views the People's Protection Units (YPG), the backbone of the SDF, as an affiliate of the Kurdistan Workers' Party (PKK) outlawed in the country. According to Ankara the current Kurdish buildup in northern Syria poses a security threat to Turkey.