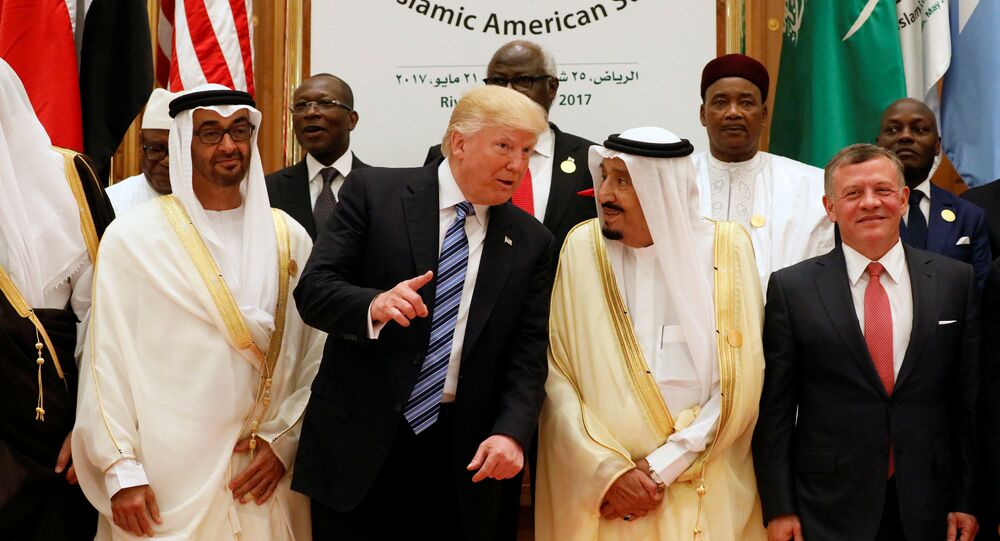 President Donald Trump is blackmailing his Gulf allies, pressuring them to pay for the US presence in Syria, Arab analysts told Sputnik. Meanwhile, it appears that Saudi Arabia wants Qatar to take on this burden amid the ongoing diplomatic row between Doha and its neighbors.

US President Donald Trump is forcing the Persian Gulf kingdoms to fork out in order to receive Washington's backing, analysts told Sputnik Arabic.

"It is not the first time that the American president has blackmailed the Gulf States," Qatari political observer Ali al-Heil said. "From the very outset of his work as a president, he has blackmailed different countries. He tried to build these sorts of relations with South Korea, from whom he demanded $1 billion for defense. He is constantly blackmailing the Saudi government and has already managed to take from the kingdom $460 billion."

Al-Heil opined that the Saudi Foreign Minister Adel al-Jubeir is trying to evade this issue, as he had pushed the country to the edge of an abyss by opening the kingdom's treasury for Trump.

For his part, Saudi political analyst Mubarak al-Ati believes that when calling upon the Gulf States to pay, the US president had Doha uppermost in mind.

"It is obvious that Trump's statements were directly addressed to Qatar," he said. "We remember that during the visit of the Qatari Emir [Sheikh Tamim Bin Hamad Al-Thani] to the United States [on April 9], Donald Trump warned him that he would withdraw American troops from the emirate if he continued to fund terrorists."

© REUTERS / U.S. Air Force
Scholar Doubts Qatar Able to Replace US Troops in Syria Amid Saudi Demand
The Saudi analyst said that the Qatari Emir had expressed his readiness to allocate $100 billion for the development of Al Udeid Air Base where the US forces are deployed. "Many consider this as a bribe," al-Ati said. He stressed that Doha is highly interested in the presence of US troops on its soil as the emirate is seeking "to strengthen its influence in the region."

On April 25, Saudi Foreign Minister Adel al-Jubeir said that Qatar should pay for the US military presence in Syria and send its troops there "before the US president [Donald Trump] denies US protection for Qatar, which is represented by a US military base on its territory."

Al-Jubeir dropped the hint that once US troops are withdrawn from Qatar the country's government would collapse "within less than a week," as the Saudi Press Agency reported.

Earlier, on April 9 the Trump administration welcomed Al-Thani to the White House as a "valued partner and longtime friend," The Washington Post reported.

'If You Want Us to Stay, You're Going to Have to Pay'

Nearly a year ago, Trump blasted Qatar for "funding terrorism": "The nation of Qatar, unfortunately, has historically been a funder of terrorism at a very high level," the US president said on June 9, 2017 urging "Qatar and other nations in the region to do more to combat terrorism and do it faster."

Trump's statement came after the imposition of a blockade against the kingdom by its Gulf neighbors, on June 5, 2017 over sponsoring extremism. The diplomatic row between Qatar and the monarchies of the region continues to simmer.

Following his April 9 meeting with the Qatari Emir, Trump suggested that Doha had turned the page: "We're making sure terrorism funding is stopped in the countries that we are really related to," Trump stated on April 10. "Those countries are stopping the funding of terrorism that includes UAE, it includes Saudi Arabia, it includes Qatar and others."

© AP Photo / APTV
US-led Coalition Declines to Comment on Reports of New US-France Base in Syria
On March 29, the US president signaled that he was going to withdraw US troops from Syria very soon. Despite the confusion triggered by this statement among US allies, Trump has repeatedly reiterated his vow.

In response, Saudi Crown Prince Mohammed bin Salman expressed his concerns regarding the president's decision: "We believe American troops should stay for at least the mid-term, if not the long-term," he told Time magazine on March 30.

A few days later, during an April 3 summit with the leaders of Lithuania, Estonia and Latvia the US president suggested that if the Gulf States provide the necessary funding, US troops would stay in Syria.

"Saudi Arabia is very interested in our decision, and I said, 'Well, you know, you want us to stay, maybe you're going to have to pay'," Trump emphasized.