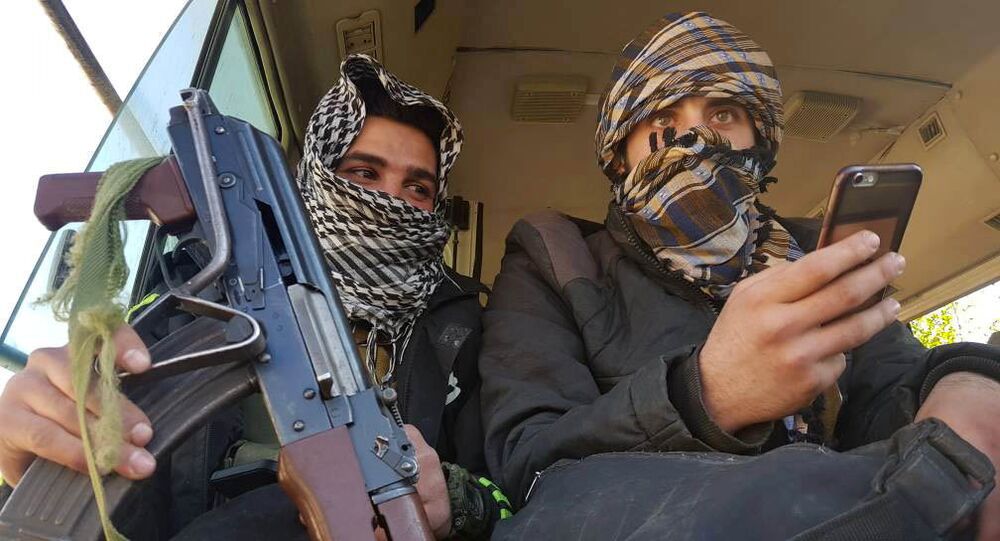 The US has yet to prove that Damascus used chemical weapons in Eastern Ghouta, Turkish political observer Caglar Tekin told Sputnik, drawing parallels between the alleged Khan Sheikhoun chemical incident and the reported Douma attack, stressing that no proof has been presented so far to confirm either of these two cases.

The US has no evidence of Damascus using chemical weapons in the Syrian town of Douma, Eastern Ghouta, except al-Qaeda's* claims, says Turkish political observer Caglar Tekin.

"Last December, after [the US] airstrike on the Shayrat airbase, [US Defense Secretary James] Mattis said that the US had no evidence that the Syrian military had used chemical weapons [in Khan Sheikhoun]. A similar situation is observed now: Again Mattis has accused Damascus of conducting a [gas] attack and again the West has no proof to confirm this. All they have are the statements made by al-Qaeda sources that chemical arms were used in Eastern Ghouta. There have been no other sources," Tekin told Sputnik Turkey.

© CC0
Macron Claims to Have Proof of Chemical Weapons Use by Syrian Government
Having said that the Syrian Arab Army (SAA) had no reasons to use toxic substances in Douma, Tekin noted: "Given the fact that the SAA liberated 95 percent of Eastern Ghouta from jihadists before these claims, it becomes clear that the Syrian government had no need for using chemical weapons."

The Turkish political observer recalled that during the seven year-long conflict in Syria, the SAA has been repeatedly accused of gassing Syrian citizens, however, no evidence has ever been presented to back the allegations.

"The US and European organizations confirmed the facts of chemical weapons attacks, but they were committed by jihadist organizations operating in Syria," Tekin said. "Meanwhile, answering the question as to whether there are chemical weapons in the region at the moment one should say 'yes'. The Syrian authorities noted in their statements that in the course of the East Ghouta operation and in other areas liberated from extremists by government forces, chemical arms production facilities were discovered, which were used by jihadists for their own purposes."

The observer pointed out that Damascus' fight against jihadists in Syria is coming to an end. Given the SAA's progress on the ground and repeated warnings on the part of the US, France, and the UK to attack Syrian government forces in case they resort to using chemical weapons, one can say with confidence that Damascus had absolutely no grounds for such a move, Tekin concluded.

© AFP 2020 / Hasan Mohamed
White House: Trump Holds Russia and Syria Responsible for Douma Chemical Attack
On April 7, the news emerged in some media outlets that the SAA allegedly used poisonous substances in the town of Douma, with the reference to sources among jihadi fighters. The very next day US President Donald Trump accused Damascus of attacking civilians, while citing no evidence to back his claim. Additionally, Trump pointed the finger of blame at Russia and Iran for supporting Syrian President Bashar al-Assad, who, according to the White House, was responsible for the supposed incident.

The Trump administration signaled that it did not rule out the military option as a response to the alleged Douma attack. On April 9, Israeli F-15 fighters attacked Syria's T-4 airbase, according to the Russian Defense Ministry. On the same day, Trump said that he would decide what steps the US would take in Syria within the next 24-48 hours.

On April 10, Syria's SANA news agency reported about the alleged evacuation of three Daesh commanders and their family members from al-Hasakah province by US Air Force helicopters.

Responding to Russia's warning against leaping to conclusions and resorting to the use of military force against Damascus, the US president tweeted on April 11 that Moscow should "get ready" for US "smart missiles" in Syria.

Meanwhile, Defense Secretary Mattis signaled on the same day that the US were "still assessing" intel on an reported chemical weapons attack in Syria.

A year ago, on April 7, 2017, Washington attacked the SAA's Shayrat airfield in response to unconfirmed reports about the use of poisonous substances in Khan Sheikhoun, Idlib province. Although the US and its allies have blamed the supposed chemical incident on Damascus, there has been no evidence emerged to back these claims so far.