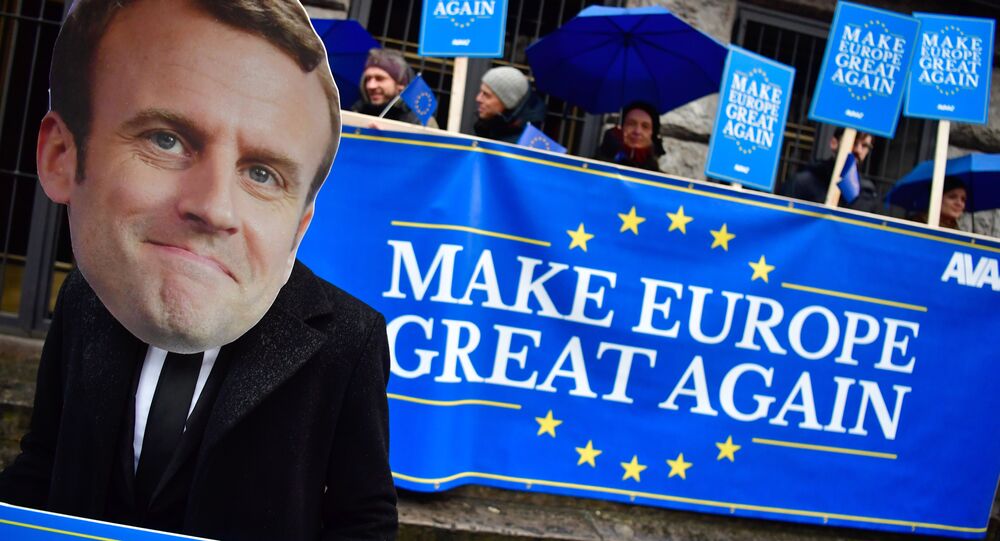 'Napoleon 2.0': What Does Macron's 'United States of Europe' Push Entail?

In his article, published by RIA Novosti, Russian blogger Ivan Danilov specifically focused on French President Emmanuel Macron's transparent plans to take control of the European Parliament, which he suggested may be followed by the establishment of a "United States of Europe."

Titled "Macron tries to become Napoleon 2.0 and offers to rob Germany," the article warns that at the end of the day, Macron's ambitions may lead to a full disintegration of the European Union.

READ MORE: EU Needs to Reform Itself to Compete With Big Powers — Macron

Danilov recalled in this regard that it was mostly US journalists who drew parallels between Macron and Napoleon due to the French President's push for "preparing to challenge the whole of Europe," which they warned is fraught with grave consequences.

"The fact is that in order to gain control over EU structures, Macron needs to be in charge of the European Parliament, which, in turn, will give him a serious lever of influence on the European Commission — the structure that plays the role of 'the EU's  government.' Moreover, Macron himself cannot and does not want to leave his presidential post, which means that he needs to 'hack' the EU's political system," Danilov pointed out.

© REUTERS / Philippe Wojazer
Legal Differences in EU Put Macron’s Idea of More Integrated Europe at Risk
He referred to the statements of the so-called European working group "created by the ambitious French President to penetrate the political systems of European countries." Danilov said this indicates that "Macron is preparing to become a pan-European political puppeteer."

Apart from money-related issues, Macron may face the main problem, pertaining to the fact that his plans run counter to those of the German political elite, which is seeking to create a European federation under Berlin leadership, according to Danilov.

"'The European Reich' does not need an ambitious banker with the habits of Napoleon, which means that the new German government will seek and finally find the necessary political and administrative levers to sabotage Macron's attempts to put the European Parliament under his control," Danilov stressed.

He did not rule out reaching a consensus between Berlin and Paris, which Danilov suggested will most likely be clinched after "a serious fight which may unfold in the political and media space in the near future."

The views and opinions expressed by Ivan Danilov are those of the blogger and do not necessarily reflect those of Sputnik.

Macron Right in Saying There Will Be Something Unique in EU-UK Deal – Prof.