PARIS (Sputnik) - French President Emmanuel Macron's plans to conduct reforms aimed at regulating the status of Islam in the country seek to organize this religion in France, depriving it of influence from abroad, experts told Sputnik.

In an interview to the French newspaper Journal du Dimanche, Macron stated he was working on a plan on the reorganization of Islam in France, in order to establish its peaceful co-existence with other religions as well as with the state. The project of the reform has not fully taken shape yet, but Macron said he planned to set all the key points in the first six months of 2018.

"I think he [Macron] is looking to organize, not re-organize Islam. He wants that Islam in France gets rid of the influence from abroad," Kader Abderrahim, an Interdisciplinary Research Institute on Social Issues (IRIS) research fellow specializing in Islamism and a lecturer at Sciences Po University said.

The expert pointed out that the implementation of the plan would face difficulties as there were many Muslim communities in France linked to the countries of these communities' origin.

"He [Macron] wants to get out of what they call 'consular Islam' in France, meaning Islam closely related to its country of origin, like Algeria, Turkey, Morocco etc. He wants for the French to be able to self-organize, and for that one needs to find financing. That is going to be very difficult, because by default the state in France cannot finance religious cult," Abderrahim noted. 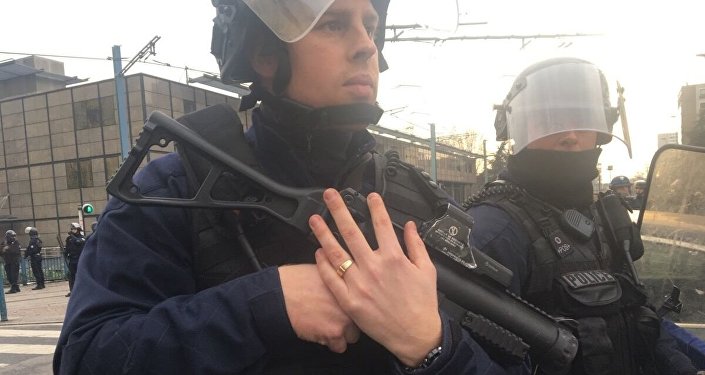 © Sputnik /
Photo of Daesh Flag, Fillon Found During Detention of Terror Suspects in France
From his point of view, the re-organization of Islam is also a diplomatic issue in French relations with Muslim states.

"It’s a diplomatic issue between France and its partners, like Algeria, Morocco, Turkey, who did not renounce their influence on their respective communities," the expert said.

Abderrahim added that if France failed to implement the program, it would continue to experience the influence of states like Saudi Arabia, which are financing mosques and imams in the country in a non-trasparent manner.

"The first problem is – who are we talking about when the government addresses the Muslims, who represents Islam? Some mosques are Turkish, others are Algerian, there are imams from Morocco etc. So there is a real problem of representativeness of Muslim institutions," Huyghe said adding that there were even no clear statistics on the number of Muslims living in France.

© AFP 2019 / FADEL SENNA
Burkini Ban in France: Restrictive Secularism as 'Instrument Against Islam'
The expert noted that the implementation of Macron's program would raise the issue of Islamophobia in France.

"There’s hypersensitivity of Muslims, feeling that their religion is persecuted, there’s Islamophobia etc, and there is a certain resistance to secularity … Macron will be walking on minefield here," Huyghe said.

He added that the real problem was that young Muslims in France were mot involved in the process of social integration.

"We see how this issue becomes an extremely sensitive national problem. I think Macron now is testing the waters, seeing what the reaction would be," the expert added.

The issue of social integration of the French Muslim community was raised after a number of deadly terror attacks across the country committed by followers of the radical Islam.