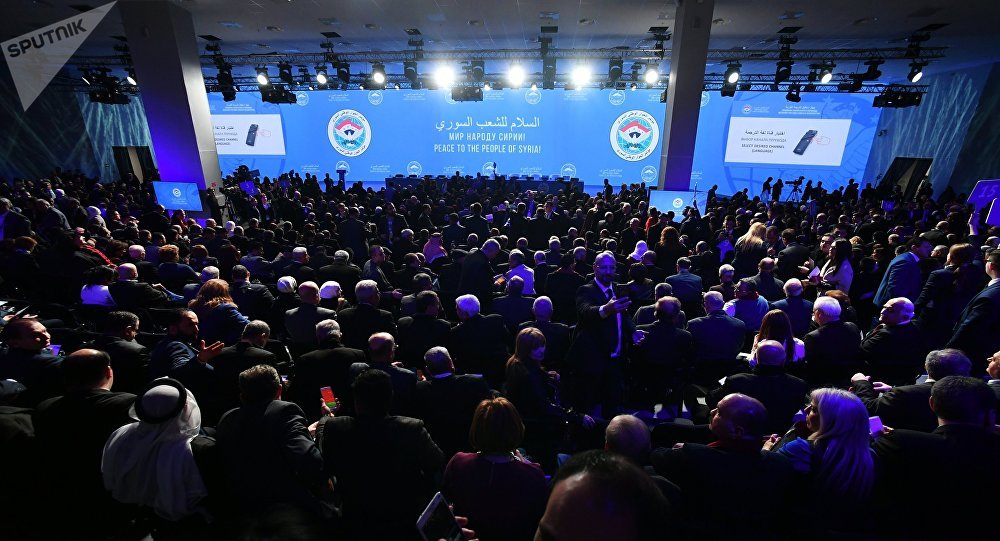 China's participation in the Syrian National Dialogue Congress in Russia's Sochi has once again demonstrated Beijing's growing influence on Middle Eastern affairs, analysts told Sputnik. They added that the US decision to snub the summit may further diminish Washington's role in Syria's peace process.

China is directly involved in seeking solutions to the Syrian crisis and supports the joint efforts to facilitate the peace process, Li Weijian, a professor of West Asian and African Studies at the Shanghai Institute for International Studies, told Sputnik China.

"China is directly involved in the negotiations in Geneva, Astana, and now in Sochi," Li said. "Participation of the special envoy for Syria of the government of the People's Republic of China, Xie Xiaoyan, in the Sochi talks has yet again indicated [China's] intention to promote a political solution to the Syrian problem."

The Syrian National Dialogue Congress took place in the Russian resort city of Sochi on January 29-30. The main outcome of the meeting was the creation of a constitutional commission. The commission will work on amending the Syrian social code. The participants of the summit also pledged their commitment to maintaining the country's sovereignty, territorial integrity, independence and ensure the rights of all ethnic and religious groups.

© Sputnik / Sergey Guneev
Putin, Erdogan Express Satisfaction With Results of Sochi Congress on Syria
Addressing the forum, Xie stressed that China is making efforts to bring all Syrians interested in stability and peaceful resolution to the negotiating table. He underscored that China maintains relations with both the government and the Syrian opposition. Beijing also interacts with Russian counterparts and representatives of the United Nations, the Chinese Syria envoy emphasized.

Igor Shatrov, deputy director of the National Institute of Modern Ideology Development, noted that Beijing "pays serious attention" to the Syrian crisis, although it does not participate in military operations on the ground. However, "China constantly makes diplomatic efforts in this direction, strongly supports the position of the Russian Federation," he stressed.

"The participation of the special envoy of the Chinese government on Syria in the congress in Sochi was, first, a logical step of the Chinese diplomacy. Second, it became an additional demonstration of support for Russia's peacekeeping efforts," Shatrov told Sputnik.

The scholar added that "unfortunately, other world powers, directly involved in solving the Syrian problem, particularly, the United States, did not participate in the congress."

© REUTERS / Khalil Ashawi
Situation in Syria's Afrin Causes Grave Concern - Russian Foreign Ministry
According to Shatrov, the US' unwillingness to participate in such gatherings could have a negative impact on Washington's role in the resolution of the Syrian crisis in the future.

In contrast, China has demonstrated its increased significance as a global power by joining the Sochi congress on Syria.

Meanwhile, during the summit Xie Xiaoyan signaled China's readiness to participate in post-war reconstruction in Syria and recalled that China has repeatedly provided financial assistance to the war-torn country. Xie noted that Chinese companies had already established contacts with their Syrian counterparts.

The question then arises whether Beijing's peace efforts in Syria are anyhow connected with its commercial interests.

"There is a definite connection between these two issues, but not the causal relationship," Li responded. "China participates in the negotiations in Sochi, in Geneva, not only because it is going to occupy its niche in the post-war reconstruction of Syria."

© REUTERS / Murad Sezer
Turkish Deputy PM Urges US to Help Avoid Face-Off Between Troops in Syria
According to the Chinese academic there are many factors that influence the issue of China's participation in Syria's recovery and the country's decision to ask China to join this process.

"Syria is destroyed, and it is not so easy to restore it," Li said. "At an initial stage huge investments and large funds are needed; and China will correlate its participation in the reconstruction of Syria with the objective situation. This task cannot be accomplished solely by China — many countries must participate in this process."

For his part, Imad Moustapha, the Syrian Ambassador to China, called the Syrian congress "inclusive and comprehensive." Speaking to CGTN broadcaster he drew attention to the fact that the summit brought together the representatives of virtually all layers of the Syrian political and social community, while the Geneva talks are usually attended by the Western-backed Syrian opposition groups.

According to the Syrian diplomat, there are some differences between the UN-sponsored negotiations in Geneva and the Sochi talks which opened the door to all representatives of the opposition so that no one was excluded.

The views and opinions expressed by Li Weijian, Igor Shatrov are those of the analysts and do not necessarily reflect those of Sputnik.