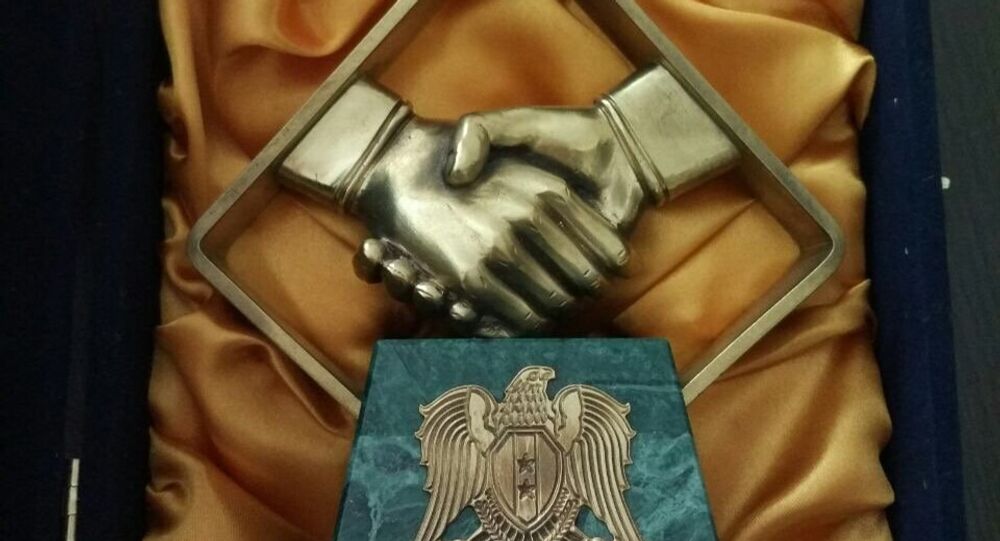 SOCHI (Sputnik) - The National Dialogue Congress in Sochi, a pinnacle event of the Russian diplomacy on Syria, has agreed to set up the Constitutional Commission out of the Syrians themselves and to give it in hands of UN Special Envoy for Syria Staffan de Mistura, to dispel any doubts that the forum was meant to disrespect UN Security Council.

The main objective of the Congress, which has been prepared by the Russian defense and foreign ministries over the last months and managed to bring together some 1,500 Syrians in the Black Sea resort city, was to launch the process of a constitutional review. This, obviously, gave de Mistura many worries, as constitution and elections have been his major focus during the last rounds of Geneva intra-Syrian talks, which never succeeded.

The Congress in Sochi laid the cornerstone for the formation of the Constitutional Commission – it announced the general agreement to do so, and nominated 150 Syrian personalities as possible members. At the same time, the link with Geneva was respected: it will be de Mistura, who will approve the final composition and decide on its work procedures, and it will be Geneva where the commission will function.

It was a bumpy start for the Russia-organized Congress, which united different layers of the Syrian society under the slogan "Peace to the people of Syria!" A long-waited opening ceremony was delayed when the Turkey-based opposition set some preconditions for its participation in the event. They refused to come out of the airport after arriving from Turkey on Monday. The group criticized the emblem of the Sochi Congress and refused to partake in any negotiations.

© Sputnik / Nina Zotina
All-Syrian Congress In Sochi Brings War-Torn Country One Step Closer To Constitutional Reform
After some hours of waiting and two phone conversations between Russian Foreign Minister Sergey Lavrov and his Turkish counterpart Mevlut Cavusoglu the issue was resolved.  A part of the group flew back to Ankara while several group members joined the work of the Congress. The Congress was officially launched by Lavrov, who convened Russian President Vladimir Putin's message to the participants and guests of the forum.

However, participants of the Russia-organized Syrian National Dialogue Congress in Sochi had different views of the forum's representation, many of them told Sputnik they believed that the boycott of the Turkey-based opposition group was unlikely to affect the outcome of the Congress.

The group from Ankara was not the only one that refused to attend the Sochi forum. The Syrian Negotiation Committee (SNC) announced on Saturday that it was going to boycott the forum but without explaining the reason for its decision.

Despite the refusal to participate by some groups, over 1,500 delegates, who represented not only a broad political spectrum, but also all layers of Syrian society — religious and ethnic ones attended the Congress. The Kurds, the Yazidis, the Druses and the Assyrians were among the invitees.

The course of the Congress was not smooth either.

© Sputnik / Mikhail Voskresenskiy
Sochi Congress Agrees to Set Up Syrian Constitutional Commission - De Mistura
Despite the fact that observers and journalists were not allowed to be present in the plenary room during the main work time of the forum, some participants were coming out and speaking of high tensions and a very emotional atmosphere inside. Some opposition members, who did not agree with the agenda, were reportedly yelling out their concerns. However, closer to the lunch time, those, who could not speak to each other a few hours ago, calmed down and drank tea together, Mahmoud Afandi, a participant of the Congress from the Astana opposition platform, said.

Both at the opening and at the closing ceremonies, some Syrians in the hall were crying out slogans in Arabic, some of them related to the Russian involvement in the Syrian issue.

However, the final lap was smooth. The Sochi Congress not only launched the process of constitutional review, but also formed the governing bodies of the forum – Presidium and a Higher Committee, as well as created technical organizing and vote count commissions.

© Sputnik / Mikhail Voskresenskiy
Only Syrian People May Define Country's Future - Putin at Sochi Congress
It is still unclear if they are going to work further on a regular basis, but the idea of holding another such conference, probably on the Syrian territory, was voiced by many participants.

For the time being, results of the Congress – the Constitution Commission – need to move to Geneva for further development and practical implementation, and the UN special envoy for Syria should be happy with that.