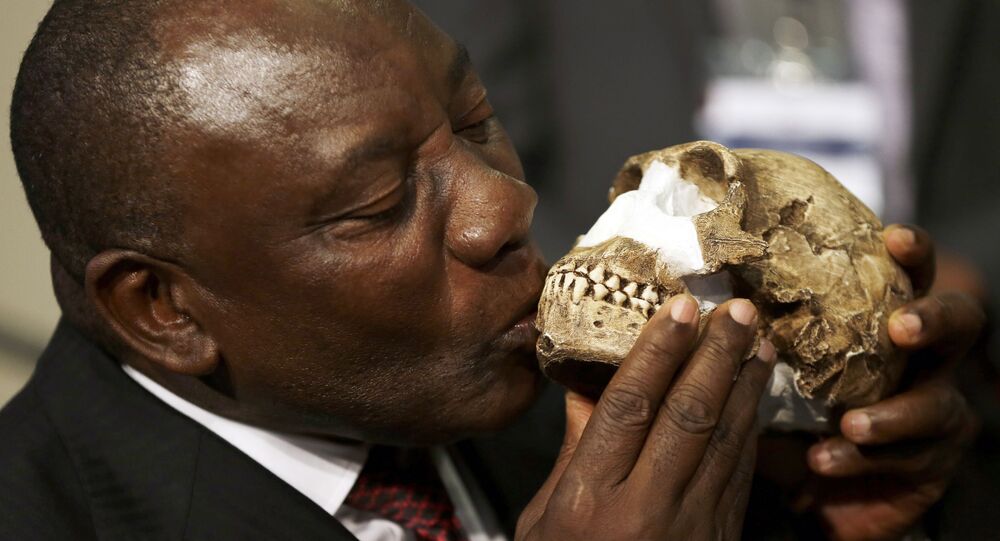 South Africa: New ANC President Could End Up Being a 'Lame Duck' - Professor

Cyril Ramaphosa has been elected as the new head of the African National Congress. But Mzukisi Qobo, a professor of foreign policy at the University of Johannesburg, told Sputnik it was by no means certain he would be South Africa's next president.

Mzukisi Qobo, an Associate Professor at SARChI, Chair of African Diplomacy and Foreign Policy, University of Johannesburg, explained Mr. Zuma would remain South Africa's president until the next general election in the summer of 2019.

If the ANC wins that election, Mr. Ramaphosa would be chosen by an ANC-dominated South African Parliament as the next President.

But Professor Qobo said the ANC's political credibility was tarnished by the stench of corruption which hangs over Mr. Zuma and several of his key acolytes and it may fail to win the next election unless Mr. Ramaphosa was able to radically reform the party.

© AFP 2020 / MUJAHID SAFODIEN
South African President Jacob Zuma (L), former African Union Chairperson and presidential hopeful Nkosazana Dlamini-Zuma (C) and South African Deputy President Cyril Ramaphosa (R) dance after the closing session of the South African ruling party African National Congress (ANC) policy conference on July 5, 2017 in Johannesburg, South Africa
"For any leader of the ANC to change the party and to stamp their mark on the country they really need massive support from within the party, which means their victory has to be very decisive, which Ramaphosa doesn't have. His margin of victory was extremely small," Professor Qobo told Sputnik.

He suggested Mr. Ramaphosa needed to make two bold moves to show the electorate he was really serious about reforming the ANC and ridding it of corruption.

The first of these would be to take advantage of a court ruling earlier this month which gives him the power to appoint a new head of the National Prosecution Authority, which would pave the way for Mr. Zuma to face criminal charges for corruption, said Professor Qobo.

Ratings agency Fitch says political uncertainty in the country is likely to continue following Cyril Ramaphosa's election as president of the ANC. #sabcnews

​Secondly, said Professor Qobo, he should set out the terms of reference for the Commission of Inquiry into State Capture.

"These two actions would put him in very good stead in how he is perceived by society and would show he is the kind of leader who has the moral capacity and leadership to reform the country's politics, to clean up the mess and provide the leadership for the economy. Without that he could find himself a lame duck leader as ANC president and by the time of the election he would have lost his credibility. People will find it hard to trust him and the opposition may be able to put together a coalition which would make it impossible for Ramaphosa to become president," Professor Qobo told Sputnik.

Advocate Shaun Abrahams is on notice not to withdraw charges of fraud, corruption and racketeering against President Jacob Zuma, pending the outcome of a Constitutional Court ruling. See this statement from @CASACZA below. pic.twitter.com/DvEB7pQOJq

He said Ramaphosa had a reputation for being decisive but he gave him only a "50/50" chance of succeeding in reforming the ANC.

State capture is a phrase which implies systemic political corruption in which private interests significantly influence a state's decision-making process to their own advantage.

In the case of South Africa it revolves around allegations surrounding the Gupta family, who run a business empire in the country and have been accused of manipulating the ANC and Mr. Zuma in particular.

The Legacy of #Marikana
On August 15, 2012 #Ramaphosa emailed a request to police – for which he weakly apologized only a few months ago – demanding “concomitant action” against “dastardly criminals,” against whom police should “act in a more pointed way.”https://t.co/QhqdEAk3Hn

​Ramaphosa, a 65-year-old businessman, is one of the richest people in the country but has not been tarnished with the stench of corruption which hangs around the 75-year-old president.

"Nelson Mandela once told me one of his biggest regrets was not doing more to help make Cyril Ramaphosa his successor," UK business tycoon Richard Branson tweeted on Tuesday, December 19.

But Professor Qobo said he did still face questions about his business and especially about his role at the mining giant Lonmin and the part he played in the Marikana massacre in 2012, when 34 striking miners at one of Lonmin's platinum mines were shot dead by police.

Professor Qobo said the overall standard of living in South Africa had improved significantly since 1994 but, despite the rise of a black middle class, unemployment was still high and incomes were still very low for the majority.

​He said a "very corrupt elite" had failed to address some key structural problems in the economy and had used government as a means of personal enrichment but he said the country's problems were very different to neighboring Zimbabwe, where Robert Mugabe was forced to step down as president last month.

The views and opinions expressed by Mzukisi Qobo​ are those of the expert and do not necessarily reflect those of Sputnik.

The Future of South Africa and Palestine Youth Under Occupation