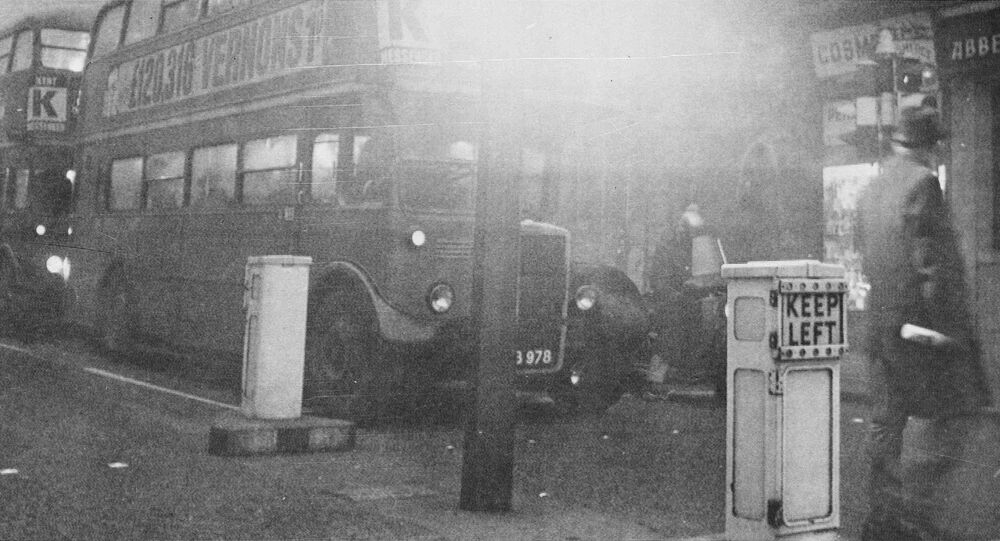 Has London Learned Lessons of the Great Smog Which Claimed 12,000 Lives in 1952?

London was hit by the Great Smog 65 years ago this month, a freak weather event which combined with terrible air pollution to kill 12,000 people. Sputnik spoke to author Kate Winkler Dawson, who has discovered how the death toll was overshadowed by the crimes of a serial killer.

The Mayor of London, Sadiq Khan, will be introducing an Ultra Low Emission Zone in April 2019 but 65 years ago this month the city was hit by the worst air pollution catastrophe in history.

The Great Smog of 1952, which claimed 12,000 lives, was caused by an anti-cyclone weather system which hung over the city for five days and exacerbated the already terrible air pollution, which was caused by high consumption of coal.

Kate Winkler Dawson, a journalism professor at the University of Texas in Austin and author of Death In The Air, spent months trawling through archives and old newspaper cuttings and discovered the disaster was overshadowed by a more sensational story.

The Great Smog: On this date in 1952 a cold fog descended upon London, it combined with air pollution and killed at least 12,000 in the weeks and months that followed. It led to several changes in practices and regulations, including the Clean Air Act of 1956 pic.twitter.com/u9RtvzXsXS

​"The story starts on December 4th, 1952, which is when the fog settled in over London. Smogs were very common at the time. London was the most populated and the most industrial city in the world at the time and there was a plentiful supply of dirty, cheap coal," Ms. Dawson told Sputnik.

"But this time it just wouldn't blow away. The anti-cyclone just wouldn't leave. It hung around for five days. London had 40 coal-powered power stations and factories pumping out fumes and the city had just replaced its electric trams with the famous double-decker buses, which were using diesel. Londoners were able to buy as much coal as they wanted and it was very cold so they were burning a lot," Ms. Dawson told Sputnik.

65 years ago today, the Great Smog of London began. 5 days of horrific pollution killed 12,000 people (yes, 12,000 people!!!) in the two-and-half months during and following the 5 day event. Never doubt that #AirPollution kills. https://t.co/sDd37BKemt

During those terrible days in December 1952 thousands of people, many of them elderly and already in poor health, developed bronchitis and other conditions and over the next few months 12,000 would die, usually in hospital or at home.

Winston Churchill's Conservative government played down the risks of the smog but Ms. Dawson discovered one Labour MP, Norman Dodds, would not let them off the hook, persistently raising the matter in Parliament.

#Onthisday in 1952, the Great Smog of London descended over the city; the smog would last until 9 December, resulting in 12,000 deaths and some 200,000 injuries. The Northern Whig printed this article about the 'pea-soup' fog on 8 December 1952. https://t.co/DynCxe9oWL pic.twitter.com/FrJBkuMnGF

​"In the spring of 1953 Parliament was beginning to debate the issue and it should have made front page news but it didn't because the press were more interested in a serial killer called John Christie, although he had only killed six people," Ms. Dawson told Sputnik.

Christie, a former police officer, had killed his wife Ethel and several other women, whose bodies he concealed inside his home in the Notting Hill area of west London.

In March 1953 he moved out and, when the bodies were discovered, a manhunt began for him.

The Christie story was front page news in British newspapers for months, until he was caught, convicted and executed in July 1953. It also emerged that he was responsible for the murder in 1948 of his former lodger Beryl Evans and her baby Geraldine, a crime for which Timothy Evans had been wrongly convicted and hanged.

In 1971 Richard Attenborough played Christie in the film, 10 Rillington Place.

Ms. Dawson said her book was a "cautionary tale" because it showed how the sensational crimes of a single man distracted the press from challenging the government on an institutional failing which claimed 12,000 lives.

"In the United States today we see the same thing with the 24-hour news cycle. When there is a salacious story, a serial killer or a president tweeting something inappropriate and the public is derailed from real news. Readers lose interest and become distracted and important issues are lost," she told Sputnik.

OTD in 1952, the Great Smog of London descended on the British capital; the unusually thick fog, which contained toxic pollutants, lasted five days and was blamed for causing thousands of deaths. | Photo Eddie Worth pic.twitter.com/UyXAjRiBAO

​In 1956 the Clean Air Act was introduced and over the next two decades London's air quality gradually improved, partly because of the closure of dozens of factories and foundries.

But rising prosperity and increasing numbers of cars and buses have caused air quality to get worse again.

Sadiq Khan has promised to improve air pollution in London which he said had been left in a terrible state by his predecessor, Boris Johnson, who is now Foreign Secretary.

"London's lethal air is one of the biggest health challenges of this generation. We can't continue breathing in air so toxic it harms children's lung development and causes chronic illness and premature death. I am determined to take the bold action needed to address this scourge once and for all," said Mr. Khan last month, as he unveiled the ULEZ.

The views and opinions expressed by Kate Winkler Dawson are those of the expert and do not necessarily reflect Sputnik's position.