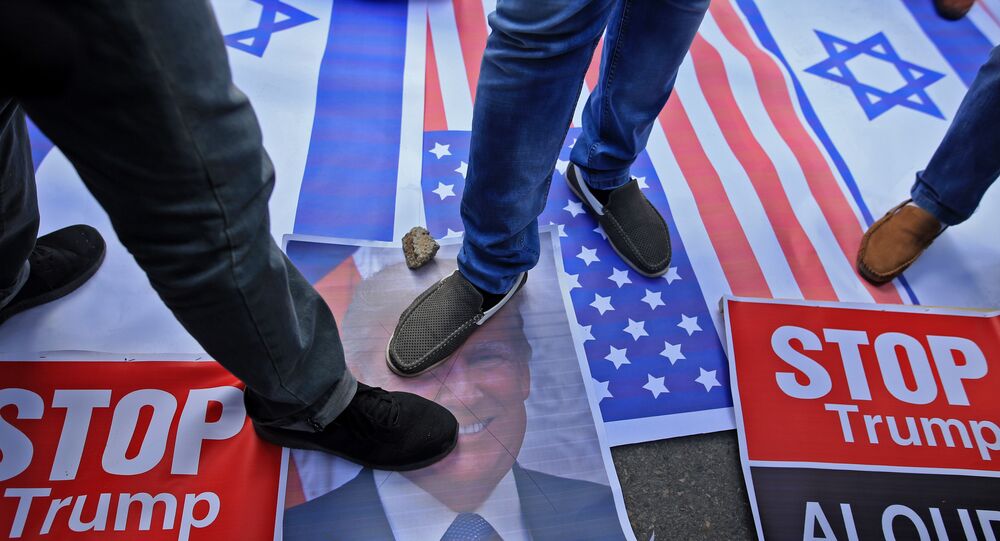 The Palestinian government is under public pressure not to bow in the face of the US recognition of Jerusalem as the capital of Israel; Trump's announcement is inflammatory and is actually more likely to strengthen Iran than Israel, Dr. Sreeram Chaulia, Professor and Dean at the Jindal School of International Affairs told Radio Sputnik.

A senior Palestinian official has said that its government would meet with US Vice-President Mike Pence later this month, amid anger over US President Donald Trump's declaration recognizing Jerusalem as the capital of Israel.

"We will not receive him in the Palestinian territories," Secretary of the Fatah Central Committee Jibril Rajoub said on Thursday, a day after Trump's announcement, which has provoked protests among Palestinians in the West Bank, including East Jerusalem, and Gaza.

Dr. Sreeram Chaulia, Professor and Dean at the Jindal School of International Affairs, Jindal Global University, told Radio Sputnik that the Palestinian government is "under a lot of pressure not to yield to any American inducement," following Trump's declaration that the US will move its embassy from Tel Aviv to Jerusalem. the city is claimed by both the Palestinians and the Israelis as their capital.

© AP Photo / Evan Vucci
President Donald Trump speaks in the Diplomatic Reception Room of the White House, Wednesday, Dec. 6, 2017, in Washington
"It will be very difficult for Mahmoud Abbas to maintain the 'moderate line.' Most people have realized that the US is not an honest broker, Trump has taken it to an extreme level. He has no strategy, for primarily domestic considerations he wants to prove that unlike Bill Clinton or George W. Bush he is the one that broke all the protocols and all the traditions of US foreign policy. He has done this to show his followers, 'You know what, I am the kind of politician who is loyal to you and keeps your faith,'" Dr. Sreeram Chaulia, Professor and Dean at Jindal School of International Affairs, Jindal Global University, told Radio Sputnik.

Sputnik: Trump did not say anything about East or West Jerusalem, he left that open, although he said "Jerusalem," as a blanket, or umbrella phrase. Do you think that there might be a chance that he will backpedal or be more specific and say, "Actually, I see two Jerusalems, and two capitals?

Dr. Sreeram Chaulia: The Palestinians and some of their Arab backers will try to apply pressure, to try and feel the distinction. Trump did not think about Jerusalem as the capital of the Palestinians at all. Trump also said, "This is how it has been and we are simply just recognizing reality. Israel occupies the whole of Jerusalem, West and East.

He is least inclined to make any concessions. You see, Trump's ideology is closely linked to far-right Jewish and Christian groups, and I don't think they will ever backtrack from this. Rather, he has left some kind of ambiguity, saying, "The final status has to be decided through negotiations." If those negotiations ever start, there won't be a role for the US. One party will not be willing to engage with the US at all.

Sputnik: Hamas has said that Friday should be the first day of Intifada. What do you think?

Dr. Sreeram Chaulia: I think the concept of Intifada, in recent times, may be a little bit amorphous. Unlike the first two intifadas, the leadership of Palestine is scattered, even though there has been reconciliation between Fatah and Hamas, they are not united on pushing for it, unlike during Yassir Arafat's time.

Even last year, there was talk of an Intifada and there was a series of stabbings and knife attacks at checkpoints. There was continuous, low-level violence, which was also labeled as an Intifada. But ultimately, it could not coalesce into a large-scale uprising that is both armed and civil resistance and disobedience, because of this political problem the Palestinians have of not having the kind of representatives who can push for it.

© AP Photo / Nasser Shiyoukhi
Palestinians clash with Israeli troops during a protest against U.S. President Donald Trump's decision to recognize Jerusalem as the capital of Israel in the West Bank city of Bethlehem, Friday, Dec.8, 2017
Iran will definitely encourage Hamas, will look to escalate [the situation]. It is the most radical anti-American actor in the region and believes that this is an opportunity for them to unify the entire Islamic community against US.

In Palestine, I think they are tired. They are resigned to their fate, which is that inch by inch, the settlements are increasing. They think that Trump will simply encourage more Jewish settlers to go into East Jerusalem, the West Bank and eat away whatever little prospects they have of an independent state of their own.

It's not looking very good, it's very grim and unfortunately that also means there is a recipe for violence. So, I think we will even see violence and violent acts of resistance. There could be a terrorism surge, small-scale incidents, but I don't see how a very beaten and jaded Palestinian community, which has been under a lot of pressure, can actually muster the resources to create a new Intifada.

Sputnik: Is there any chance that other international players can now effectively intervene to move forward and to avert some of the possible escalations that are on the brink right now?

Dr. Sreeram Chaulia: Unfortunately, the Saudi Arabian monarchy can't play a role, being very close to Israel – so much so that they lost the faith of the Palestinians. Way back in 2002, the Saudis had a peace plan [but] it is rumored that just before this big blow came from Trump, the Saudi crown prince had apparently threatened Mahmoud Abbas.

[He told Abbas] that he has to accept a kind of moth-eaten Palestinian state, give up a lot of the claims and agree to a watered-down Palestine or not even that, on behalf of Israel. If the Saudis respond to this, they can have an impact but unfortunately, they are obsessed with containing Iran right now.

© AFP 2021 / Ahmad GHARABLI
Iranian Politician: No Matter How Strongly Trump Wants It Jerusalem Won't be Israel's Capital
They may like what is happening because that way, they feel like they can consolidate and isolate Iran but my view is that this step would actually not strengthen Israel so much. It would actually end strengthening Iran more, geopolitically and regionally, because Iran is the only force that has consistently not compromised on the Palestinian issue, despite being a Shiite power.

Other regional players, like Turkey, Saudi – they are all horrified with what Trump has done, but as the weeks proceed it looks like Saudi, unfortunately, is not going to play the peace broker role that it should ideally do. It can do, [but] it is now very close to Israel and of course traditionally it has voiced at least token support for the Palestinian cause, but I think Crown Prince Mohammed bin Salman has got a completely different agenda.

He is least concerned about the state of the Palestinians, because of his obsession with checking the Iranian influence. So, the region as a whole, if you see, is like a powder key. We are seeing the war in Yemen erupting time and again, the violence and suffering there.

We don't know how the Syrian settlement will end up, although the war [there] is kind of winding down. Further afield in Libya, there is instability. Lack of stability means there is no concept or higher vision for the Palestinian question and the resolve the Israel-Palestine disputer right now. So, all Trump has done is added fuel to the fire and made it a lot worse.

The views and opinions expressed Dr. Sreeram Chaulia are those of the speaker and do not necessarily reflect those of Sputnik.