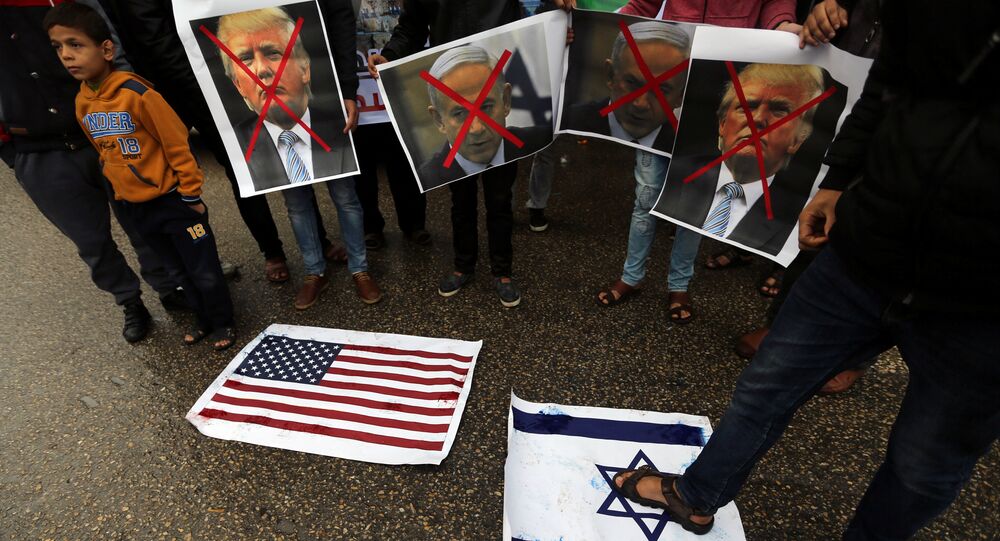 Speaking to Sputnik about US President Donald Trump's decision to recognize Jerusalem as Israel's capital, Fathi Abu al-Aradat, a Lebanon-based representative of Fatah and the Palestinian Liberation Organization, emphasized that only the city's residents have the right to decide its status.

Clashes erupted between Palestinian protesters and Israeli security forces in Jerusalem, the West Bank and Gaza Friday as people marched to voice their opposition to Washington's move to recognize the religiously and ethnically diverse city of Jerusalem as the capital of the Israeli state.

Fathi Abu al-Aradat, a spokesman for the Fatah, a Palestinian nationalist party and the largest faction of the PLO, condemned the decision. "We resolutely condemn Donald Trump's decision to move the US Embassy to Jerusalem and to recognize the city as Israel's capital," the spokesman said. "Jerusalem's fate must be determined by the city's residents and by the Palestinians who consider the city their capital," he added.

"We regard this decision by the US leader as a blow to the process of political settlement. This step is similar to the Balfour Declaration of 1917, when those who did not own Palestine handed it over to someone who did not deserve it," al-Aradat said, referring to the WWI-era statement by the British government announcing support for the establishment of a 'national home for the Jewish people' in Palestine.

© CC0 /
Text of the Balfour declaration
© AP Photo / Nasser Shiyoukhi
Day of Rage: Dozens of Palestinians Injured, Two Reportedly Killed in Clashes With Israelis in West Bank, Jerusalem, Gaza
Expressing gratitude to nations which voiced their opposition to Washington's move, the spokesman stressed that the US has lost its ability to serve as an "objective mediator" on the Israeli-Palestinian conflict. "They are not capable of shaping peace. Palestinians will offer extensive resistance through all possible means to this unjust decision," he said.

"This is our land, and Trump's decision will not change the real state of affairs. We are the owners of our land, and will fight for our rights with all possible means and with the help of the international community. We have not heard a single [nation voicing] approval for Trump's decision. There has been condemnation from all sides," al-Aradat emphasized.

"The occupation will eventually end. Trump's decision has shown that he is unable to lead the political process. Perhaps he is simply unqualified to manage a large power like the United States. The decision he has made threatens the foundations of peace and justice. It violates the rights of the Palestinian people, and those of Muslims and Christians," the spokesman concluded.

The Hamas political and militant movement has called for a more radical reaction, insisting that Palestinians launch an uprising against Israel. The Israeli military has already launched strikes against several targets in the Hamas-controlled Gaza strip Friday amid rocket attacks into Israeli territory. Security analysts are concerned that the situation may escalate.