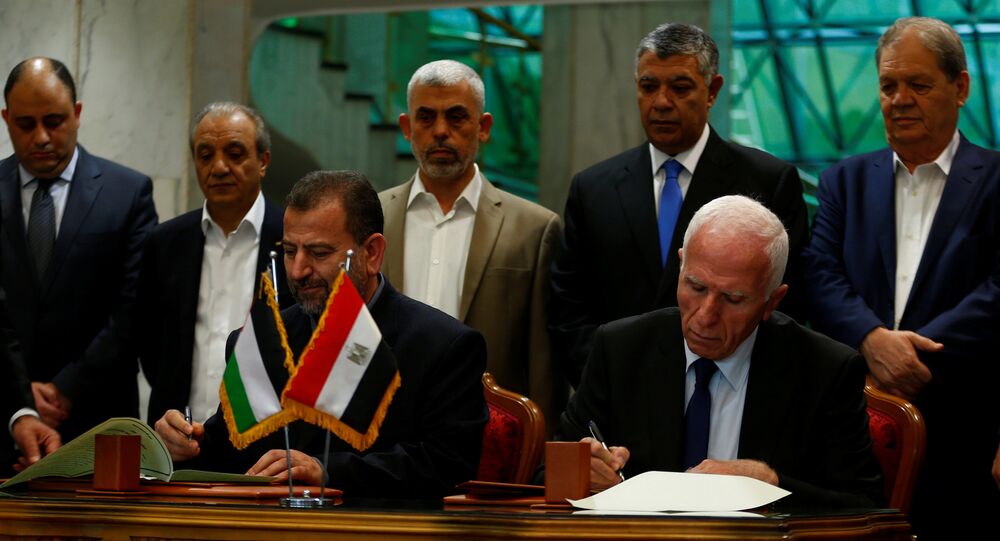 Hamas-Fatah Accord Risks Failing Due to Groups' 'Different Methods'

As Hamas and Fatah appear to have finally reached an agreement on a deal after a decade of mutual hostility, it remains unclear how long this accord is going to last due to significant differences between the two organizations.

Professor Eytan Gilboa, Director of the Center for International Communication and Senior Research Associate at BESA Center for Strategic Studies in Israel, told Radio Sputnik that this is not the first time that Hamas and Fatah have reached a reconciliation agreement, and that none of these treaties were long-lasting.

"There are all kinds of issues that the two have still to solve, such as who is going to be in control of the thousands of rockets that Hamas has in the Gaza Strip, what will happen to attack tunnels that Hamas has been digging in the last two years into Israel, and who is going to decide about using force against Israel," Professor Gilboa said.

Hamas will have to make a number of concessions to the Palestinian Authority, with "number one" focusing around the vast arsenal of weapons controlled by the group, he pointed out.

"This is a sticking point between the two sides; it remains to be seen how it’s going to be resolved. Many observers in the Middle East think that this is not going to work, and that Hamas will continue to operate as an independent military militia. And if this is the case, then we should expect friction and disagreements between Hamas and Fatah," Gilboa added.

American historian, writer and commentator Daniel Pipes also appeared to share Gilboa’s skepticism, pointing out that the two organizations in question employ different methods, and that the bilateral agreements they made in the past did not work.

Sputnik: On what key political aspects do Fatah and Hamas differ?

Daniel Pipes (DP): They differ in philosophy, personnel and in tactics. They are two organizations, which seek the same thing; namely the elimination of the Jewish State of Israel. But they go about it in very different ways, namely the Palestinian authority is ready to negotiate with Israel, whereas Hamas is not. It’s just confronting Israel.

Sputnik: Is the deal they have signed likely to be a success?

© REUTERS / Amr Abdallah Dalsh
Agreement Reached Between Hamas and Fatah, But Can the 'Circle Be Squared'?
DP: I’m skeptical and partly because past agreements did not work out. Notably the one in 2014, but perhaps more importantly they have some key unresolved issues. Notably, Hamas has a militia estimated at 25,000 strong which is not accounted for in this accord, so who is going to control it? Is it going to come under Fatah or under the Palestine Authority? Hamas has said ‘No’ it won’t. Will the Palestinian Authority accept this relatively speaking, very large force under its control? It’s hard to see this being resolved, easy to see this being a deal breaker.

Sputnik: How will Israel react?

DP: Well the Israeli’s have already reacted. The Prime Minister’s Office put out a statement, saying, ‘this is the wrong way to go about making peace that the Palestinian authorities should work with Israel and not with Hamas. Hamas is a murderous terrorist organization.’ This is a very bad step.

Sputnik: Do you think that it will have any impact at all on the political future of Palestine?

DP: I’m inclined to think, this will be one more failed agreement that will be forgotten. But who knows. I could be wrong. It could end up being a significant reconciliation between these two factions.