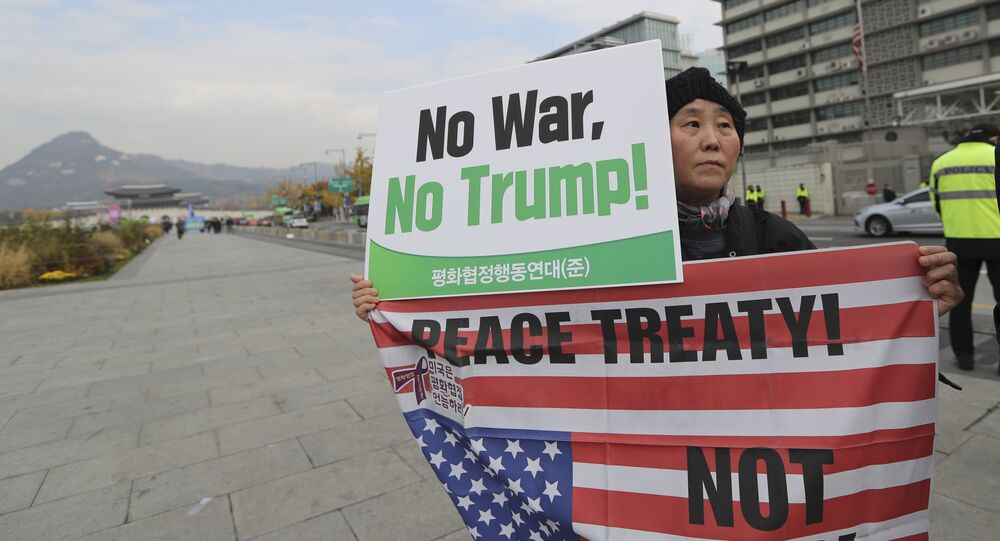 Thousands of South Koreans have participated in demonstrations ahead of Donald Trump's visit to Seoul on Tuesday; they are worried about the catastrophic effect that war with the North would have on their country, Park Jung Eun, deputy secretary general of the People's Solidarity for Participatory Democracy (PSPD) a Seoul-based NGO, told Sputnik.

Amid North Korea's testing of ballistic and nuclear missiles and Trump's tough rhetoric on the issue, anti-Trump protestors gathered in Seoul on Sunday and chanted, "We oppose war! Negotiate peace," and waved banners and balloons emblazoned with slogans such as "Peace, not war" and "We want peace."

Park Jung Eun, deputy secretary general of the People's Solidarity for Participatory Democracy (PSPD) a Seoul-based NGO, told Sputnik that the protests reflect the mood among many South Koreans, who are keen for both the US and North Korea to take steps to de-escalate the situation.

He added that joint military exercises between the US and South Korea should also be halted, as well as a freeze on North Korea's nuclear development. However, Park is "skeptical" about the prospect of Trump softening his hardline position on North Korea.

"I think Trump will keep his hard line position regarding North Korea and use this trip to [improve the US's] economic interest by pushing China and South Korea," Park said.

"The only country that faces damage from this tension and crisis is South Korea. The US, Japan and North Korea are benefitting," he added.

​"Unfortunately, North Korea only wants to focus on negotiating with the US not South Korea now. For the time being, it's difficult to expect South Korea to holds talk with North Korea, which is participating in sanctions against North Korea. Nevertheless, the South Korean government should try and improve relations with North Korea and persuade the US as it did in 2000 and 2007. South Korea has to make room for dialogue with regard to the North's participation in the PyeongChang 2018 Winter Olympics, consider partially lifting sanctions and suggest the restoration of a military hot line."

Central Seoul where pro-Trump & anti-Trump rallies are held a few meters apart, with both sides claiming they are "real voices" of S.Koreans pic.twitter.com/Xv63JNVDXd

​President Trump is on a 13-day visit to Asia and held a joint news conference with Japanese Prime Minister Shinzo Abe in Tokyo on Monday. He defended his repeated threats to take military action against Pyongyang in an attempt to stop it carrying out ballistic missile and nuclear tests.

"Some people said that my rhetoric is very strong. But look at what's happened with very weak rhetoric over the last 25 years. Look where we are now," Trump said.

© AP Photo / JungJ Yeon-Je/Pool Photo
South Korea Pledges Not to 'Develop or Own' Nuclear Weapons
The US President also said that Japan would be able to shoot North Korean missiles "out of the sky when he [Abe] completes the purchase of lots of additional military equipment from the United States."

Tensions between Pyongyang and Washington have escalated this year as the North carried out a string of ballistic missile and nuclear tests, with President Trump vowing to retaliate. In early September, Pyongyang claimed to have carried out a successful underground test of a hydrogen bomb. On September 15 it fired an intermediate-range Hwasong-12 missile 3,770km over the Japanese island of Hokkaido and into the Pacific Ocean.