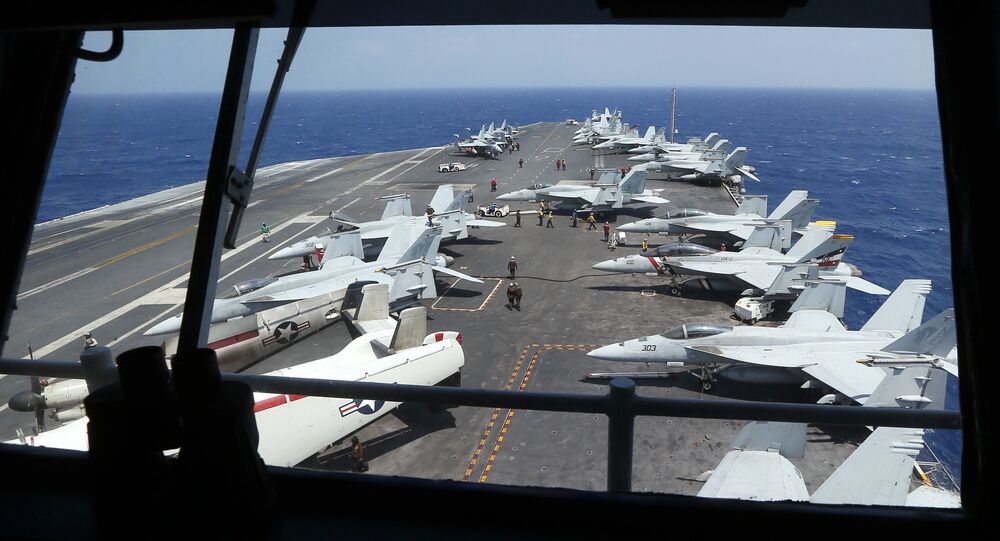 Donald Trump is on 11-day trip to Asia, the longest tour of the region by a US president in 25 years and includes visits to Japan, South Korea, China, Vietnam and the Philippines. The latter three countries are involved in a territorial dispute over the South China Sea. Defense analyst Carl Thayer explains what the US interests in the region are.

Ahead of the trip, China’s ambassador to the United States Cui Tiankai warned the US against impeding Beijing’s efforts to reach an agreement with its neighbors on a code of conduct in the South China Sea. The envoy stressed that the US should let the regional powers manage their disputes themselves as Washington has no territorial claims in this area.

Carl Thayer, Emeritus Professor at the University of New South Wales at the Australian Defense Force Academy explained to Sputnik Radio what the US is after in the region.

Sputnik: What is the importance of the South China Sea to the US and what interest could Washington have there?

Carl Thayer: It is mainly strategic and commercial: one is that the South China Sea links the Indian and Pacific Oceans and the waterways and the airways necessary for the US military to transit from one to the other, from the Middle East and back, for example. Commercially a large amount of world trade goes there, including US trade. And the US has always talked about the Freedom of Navigation of commercial vessels. They are not being threatened by China, but it is a secondary interest in itself. And third is that the US has had primacy [in the region] since the Second World War which is now being eroded, so the Trump administration has got to get its head around there or to adjust to that fact.

Sputnik: Historically, this region has been strategically important for the US. Are the attempts to challenge the Chinese presence in the waters there amount to undermining Beijing's dominance in the area? What does the US have to gain from this?

Carl Thayer: There are three challenges the US is launching, all of which are mainly aimed to deter militarization. The first, however, is the legal challenge, the Freedom of Navigation operational patrols to challenge excessive maritime claims. The other – continuous naval presence and the third – is the so-called bomber presence to indicate to China that it is not going to dominate in the South China Sea militarily. The US is putting pressure on China with unclear threats though and unclear challenges to Chinese supremacy. It has not deterred the deployment of the Chinese fleet. What does the US have to gain? It is stuck in a policy and an operation but not a strategy – the US has no strategy for an outcome yet in the South China Sea.