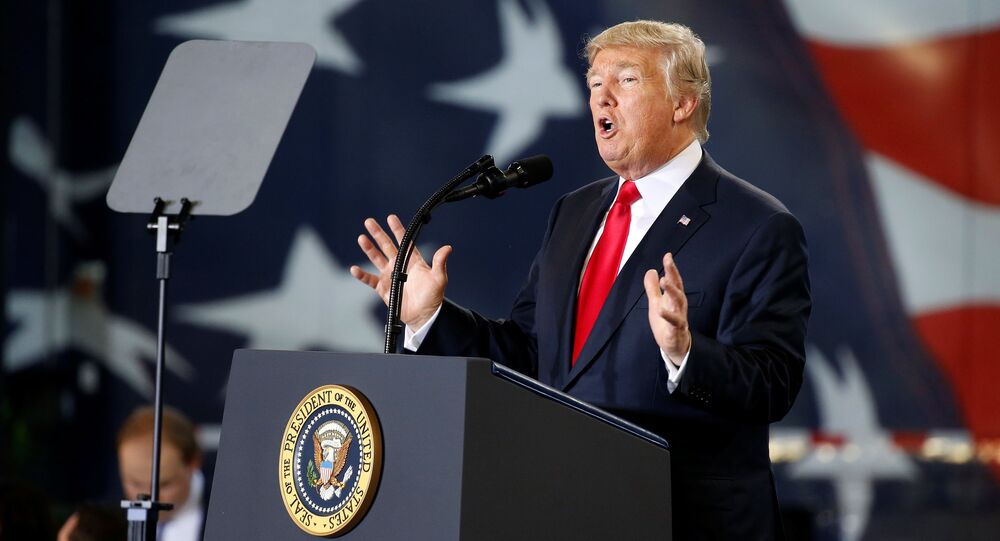 The US intelligence services enjoy three times more funding than they received before 9/11 and wield a great amount of power over the US President; if Trump were to challenge the CIA, NSA or other elements of the "deep state" it would be an unprecedented move, former US intelligence analyst Ray McGovern told Sputnik.

Ray McGovern spent 27 years as a CIA analyst and routinely briefed US Presidents on intelligence issues. Since retiring from the CIA in 1990, McGovern has made a name for himself as a peace activist, speaking out on issues such as George Bush's use of intelligence in the run-up to the Iraq war and the CIA's use of torture.

On Tuesday, McGovern spoke at an event in Berlin organized by the German website NachDenkSeiten (Pages for Thought). In an exclusive interview with Sputnik Deutschland, McGovern discussed the current US President and the "deep state," which is believed to wield considerable power over the White House.

Sputnik: How do you evaluate the current relationship between the US and Russia? You hoped that a better relationship would be possible with Trump as US President, how do you see this situation today?

Ray McGovern: I am disappointed, of course. When he won the election, I thought there was a so-called 'silver lining,' that he wanted to – and I think he still wants to – improve relations with Russia. However, there are too many impediments, [including] the media, the Democratic Party and some of the Republicans. They have made up these fairy tales about Russian interference in the election and so it is very difficult for Trump to do something about it.

The weapons trade, the military, which always causes problems, and the intelligence services, which have three times more money now than they did before 9/11, are all factors here. It's a difficult situation and there are a lot of grounds to drive Trump from office, to impeach him. He left the Paris climate agreement, he launched missile strikes in Syria without consulting Congress, and he has done a lot of things which are 'impeachable.' What is true is that these 'extra' grounds [for impeachment], namely that he wouldn't be President without Putin, are very dangerous and hinder any improvement in relations between Washington and Moscow – that can be dangerous.

1 / 3
© Sputnik / Tilo Gräser
Ray McGovern speaking at an event in Berlin
Sputnik: On your last visit in November with William Binney (former technical director of the NSA) you warned that the intelligence services could manipulate Trump. How do you see the situation, do the intelligence services, the US military have the US President in their pocket? Are they controlling him, in various conflicts?

Ray McGovern: The so-called 'deep state' has a lot of power indeed, it was the same with Obama. The director of the CIA, John Brennan, had more influence over Obama than any other person. When the Senate wrote its report on [CIA] torture, Obama did everything to avoid publishing it. He wasn't successful in that, but in other things, for example the so-called 'moderate rebellion' in Syria and so on, the CIA and the military had a powerful influence.

So, I presume that things will continue in the same vein, but it's always possible that Trump realizes that he is the President, with the power to command the CIA and order them to reveal proof of Putin's alleged interference in our elections. I don't know what would happen if he did that because it's very difficult and it's probably the reason why Trump said once, "I don't know, maybe the Russians interfered, maybe it was the Chinese, I don't really know." However, he can demand that the NSA tells the truth, which would be the best thing to do. The next question is, what would the NSA do? Would they tell the truth? It's odd that I say this, given my background, but I don't know if they would tell the President the truth.

The concept of the "deep state," which came to popular attention during the 2016 presidential campaign, is generally used to describe an anti-democratic, "globalist power cabal made up of the permanent military, intelligence, and diplomatic bureaucracies," Andrew Korybko of the Institute of Strategic Studies and Predictions at the People’s Friendship University of Russia explains.

Ray McGovern: It's very complicated. It's possible, but I doubt it. In my opinion, the US President is totally unpredictable, whether the CIA tells him something or not. He didn't find out any information about the [alleged chemical attack] in Syria on April 4, before he gave the command to attack with 59 Tomahawk cruise missiles. So, when somebody is totally unpredictable, when you have to rely on the military to put a brake on the President, then we are in danger.

We have three four-star navy admirals in power: General Kelly, the White House chief of staff, Dunford, Chairman of the Joint Chiefs of Staff and the Defense Secretary, James 'Mad Dog' Mattis. Then we have an army general with 'only' three stars, who is National Security Advisor [H.R. McMaster]. So, we have a militarized government but with an unpredictable President. Perhaps it's not so bad because the military, hopefully, knows what war means and particularly what a war against Iran, for example, would mean. We are not ready for that and I think that Iran is completely different from Iraq. Iraq had almost no defense capabilities, Iran is completely different."

© AP Photo / Susan Walsh, File
'Shaping Politics': Why the US 'Interferes' in Elections in Foreign Countries
Ray McGovern: If I were Putin, I would have to presume that if an agreement with the US comes into force, you never know how long it will be in force for. For example, the ceasefire agreement in Syria in September 2016 was approved by Obama and Putin personally [but] then the US Defense Department said, 'we don't agree, perhaps we'll bomb Syrian army bases,' where they had been stationed for six months. That is very tough and so not just Putin but other statesman must also consider what an agreement with the US President means – I'm not just talking about Trump, but about Obama as well."

Sputnik: A final question – you were active during the Cold War, in the past you have talked about the danger in 1983 of a nuclear war breaking out. I spoke with the last East German spy chief, Werner Grossman, who said that if Russia had no nuclear weapons, then there would already have been a war against Russia a long time ago. What do you think?

Ray McGovern:  There has to be a balance. Our former Defense Minister, Bill Perry, said, 'We could destroy all our ICBM's and it wouldn't do anything. We have the so-called triad, the land-based missiles, submarine weapons and airplanes.' I wouldn't say that the US would suddenly want to attack if Russia didn't have nuclear weapons, but the most important thing is what the Russians think. I assume that they think that there should be a balance, a mutual deterrence, so therefore the question is whether the Russians think that is the case. Do they have a lot of strike power and capabilities to, after a first strike, destroy not only the US but the rest of the world? I find that hard to believe. However, things are very dangerous at the moment, more dangerous than in the last 55 years following the Cuban missile crisis.