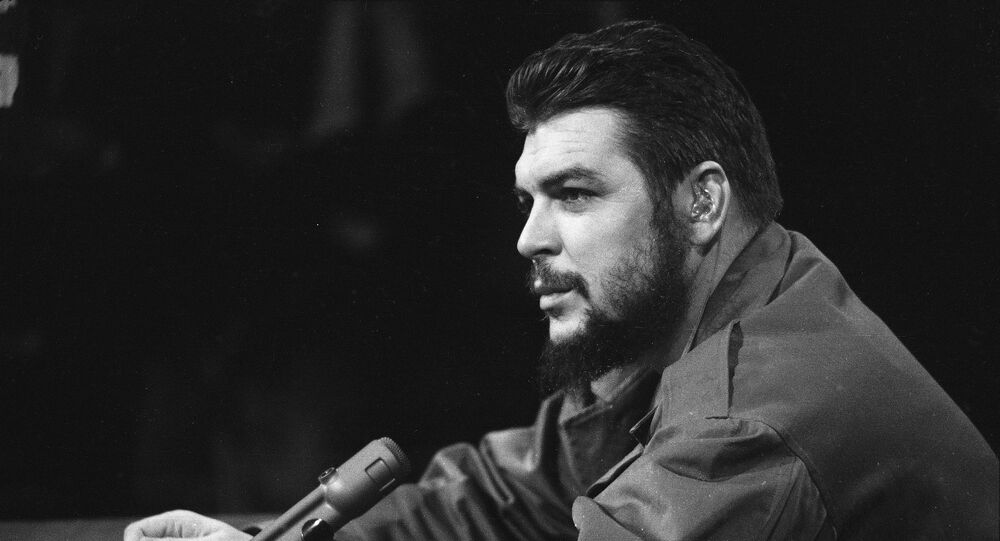 Immortalized in Hearts of People 50 Years Ago: The Kind of Man Che Guevara Was

Exactly 50 years ago Comandante Ernesto "Che" Guevara, one of the most famous Latin American revolutionaries, was killed by the CIA-backed Bolivian military forces. One of Che's dreams was to bring a revolution to his homeland, Oscar Fernandez Mell, Guevara's friend and associate, told Sputnik, sharing memories about the Argentinean.

The rebellious spirit of Ernesto Che Guevara still inspires people around the world, as if the great revolutionary of the 20th century had not been killed 50 years ago. Today Sputnik shows you Che's life through the eyes of his own friend, who knew him not as an iconic figure but a person with merits and demerits, successes and failures and who knows where Che wanted to bring the revolution.

Sputnik got in touch with Oscar Fernandez Mell, a doctor and Guevara's old friend. Their friendship began in the end of the 1950s, when Cuban rebels were fighting against the regime of the US-backed dictator Fulgencio Batista y Zaldivar.

Mell, then a young doctor, was working on the west side of the Sierra Maestra mountain range, in southeast Cuba, when Che went there to organize the resistance against the Cuban dictatorship.

"The first time I saw him, he was riding a mule, and we greeted each other," Mell recollected. "Then we went together by jeep driving on a terribly narrow road with numerous potholes that ran along the edge of the cliff. Periodically, the car stalled, and we had to start the engine again and again. I was sitting on the side nearest to the precipice."

© AFP 2021 / TOMMY WEBER
Good-Bye, Comandante! 'Fidel Castro Was David Who Defeated Goliath'
Realizing that Mell was in panic Che tried to divert him from his fear: "When we reach our destination I will tell you something very important," the revolutionary said.

However, when they arrived, Che immediately threw himself into work and forgot about his promise. The young doctor had to remind the partisan of his pledge.

"Then he confessed to me that he was driving a car for the first time in his life," Mell said. "That's the kind of man Che was."

These peculiarities made the famous Argentinean an "atypical" person.

In the Sierra Maestra — an extremely unfriendly place — Che created the first permanent camp for the rebels. There were a hospital, an ordnance workshop, tailor's workshop, and even a shoe-repair shop. According to Mell, "it was a luxury."

The anti-imperialist, internationalist, revolutionary socialist legacy of #CheGuevara lives on, martyred in the struggle 50 years ago today pic.twitter.com/vlJUXHAmRr

​However, the camp was soon detected by Batista's army which started bombarding it from the air. Nevertheless, the Comandante managed to outmaneuver his adversaries: Che took the flag of the 26th of July Movement — a revolutionary organization led by Fidel Castro — and placed it on the hill 5 kilometers away from the camp.

"After that [Batista's] bombers flew away," Mell noted, adding that the people called such tricks "Che's deeds."

The old doctor recalled that after their first meeting he and Che had never parted. The two took part in the Cuban revolutionary mission in Congo. Their goal was to overthrow the government. However, the situation was not as easy as it initially seemed. According to Mell, there were problems in Congo that Che "was unable to solve."

"The information he received was inaccurate," Che's old friend told Sputnik. "There were no resistance fighters, but people from different tribes without any military organization.

In addition, although the Tanzanian government agreed to provide passage for Cuban revolutionaries through its territory, a person like Che, who was known worldwide, caused political problems. Therefore, Che had to remain anonymous for a period of time and Congolese revolutionaries learned about the famous Argentinean only when he was already in their territory.

'I Lost More Than a Friend'

After the Congolese operation the two friends never saw each other again. Che continued his revolutionary struggle which ultimately led him to Bolivia, while Mell stayed in Congo as the head of a group of soldiers who were ordered to rescue remaining Cubans in the region.

Mell believes that Che's major goal was not Bolivia, but Argentina.

"[Bolivia] was just one step on his way to the south," the old doctor said. "He wanted to bring revolution to his native land."

By the time it became known that Che was killed, Mell had already been in Havana. The doctor accurately remembers this moment.

"I was in the Ministry of Armed Forces, and Ramiro Valdez Menendez [the incumbent Cuban government vice president] told us that news," he recalled.

"At that moment I realized that I lost more than a friend," Mell said, "I lost a man who taught me to be a revolutionary."

Ernesto Guevara (June 14, 1928 — October 9, 1967) was an Argentine revolutionary, physician, author and military theorist who played a pivotal role in the Cuban Revolution of 1953 —1959 headed by Raul and Fidel Castro.

After the ouster of Batista, Guevara was appointed as an official in the new Cuban government, responsible for a wide range of the country's domestic and foreign affairs. Guevara's military skills helped the Cubans to repel the CIA-organized invasion of the Bay of Pigs in April 1961.

In 1965 Guevara left the Caribbean country to assist the revolutionary struggle in Congo and then in Bolivia, where he was captured by the country's military forces backed by the CIA. He was killed without trial on October 9, 1967, at the age of 39.

Apart from being a military strategist, diplomat and politician, Che was a writer. His "Motorcycle Diaries" which tells the story of his voyage across Latin America in the early 1950s became nothing short of a best-seller.

In 1999 he was named among the 100 most important people of the 20th century by Time magazine.