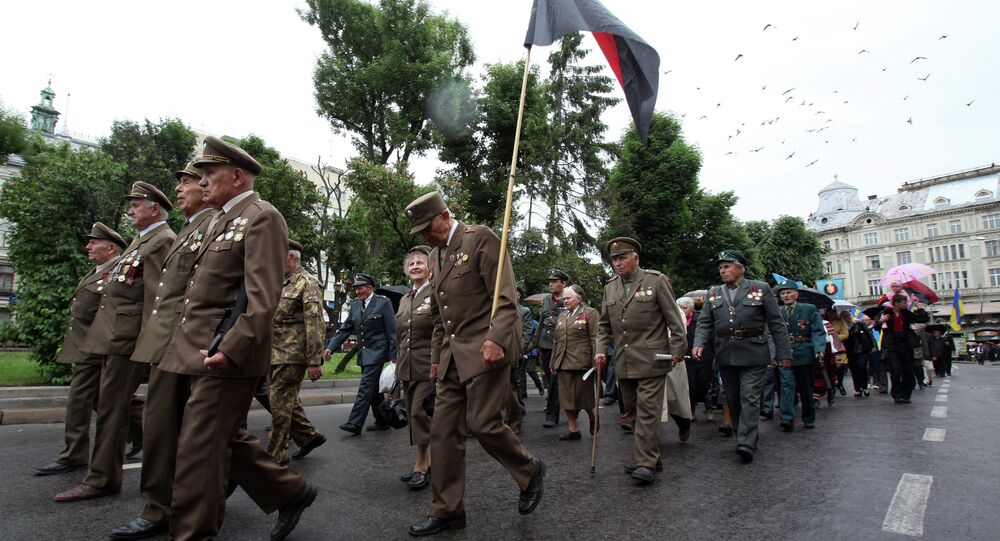 By equating the Soviet Union to Nazi Germany and Joseph Stalin to Adolf Hitler, Ukrainian politicians and their Western supporters are trying to cover-up their own shameful history, American professor Grover Carr Furr told Sputnik.

The West is turning a blind eye to the Verkhovna Rada's decision to equate Communism to Nazism, and declare that the infamous Nazi collaborators – the Organization of Ukrainian Nationalists (OUN) and Ukrainian Insurgent Army (UPA) – were "fighters for Ukrainian independence."

svoboda
On a Mission to 'Destroy Moscow’ – Kiev Nationalists Remember World War II
Law 2558, adopted by the Verkhovna Rada on April 9, 2015, stipulates that those who deny "the criminal character of the communist totalitarian regime of 1917-1991 in Ukraine" may face criminal prosecution.

At the same time the Ukrainian parliament proclaimed the Organization of Ukrainian Nationalists (OUN) and Ukrainian Insurgent Army (UPA) "fighters for Ukrainian independence," and restricted questioning the legitimacy of their actions during the Second World War.

Curiously enough, the majority of Western leaders have not rushed to condemn Kiev's initiative with the exception of a few prominent scholars and experts, who expressed their deep concerns regarding honoring the notorious Nazi collaborators.

And it is hardly surprising, deems Professor Grover Carr Furr, a prominent American historian, author and expert in Soviet history.

"This is nothing new. The United States permitted Ukrainian fascists to flee the Red Army to the USA, Canada, and elsewhere [after the Second World War]. The US CIA funded Ukrainian Nationalist research groups, newspapers, and of course spies," the professor told Sputnik.

© Sputnik / Alexander Mazurkevich
History, Repeated: Ukraine Neo-Nazis Turn to Old Ally US for 'Help'
"In short, the USA (and Canada, in an even larger way) spent a lot of money supporting Ukrainian fascists after 1945. When the USSR broke up the US began to get its money's worth. The Ukrainian nationalists – the OUN, former UPA, and so on – flooded back to Ukraine after 1991. They soon captured the universities and education generally," Professor Furr noted.

The historian emphasized that the post-war claims of the OUN-UPA to have fought Nazi Germany have collapsed under careful scrutiny.

"Some scholars have looked for evidence that the OUN-UPA fought the Germans, but can't find any. And the Nazis let [Stepan] Bandera and [Roman] Shukhevich out of prison in 1944 [and 1943, respectively] in order to enlist them to fight the Red Army. If the OUN-UPA had been fighting the Germans, they'd have been shot, not released," the professor remarked.

© Sputnik / Loskutov
Hijacking History: Ukraine Erasing USSR's Contribution to Victory in WWII
The OUN and its UPA military wing were behind the massacre of about 100,000 Poles in Volhynia and Eastern Galicia, the Khatyn mass murder in Belarus and involved in the hideous Holocaust cleansing.

© Sputnik / Miroslav Luzetsky
Secret Documents: Kiev Instructs Media to Glorify Nationalist Groups on Victory Day
However, "Mykola Lebed [who was responsible for the murder of Poles in Volhynia and Eastern Galicia] lived in Queens, New York, until the 1990s, totally supported by the CIA or State Department. Why would the US change its policies now?" Professor Grover C. Furr noted with a bitter irony.

The new Kiev legislation is not the first attempt aimed at equating Communism and Nazism: pro-nationalist Ukrainian scholars have been systematically spreading myths of the Soviet crimes against Ukrainians since the end of the Second World War. One of these well-known attempts to rewrite Soviet history is a "Holodomor" hoax.

"In 1987 the film "Harvest of Despair" was made. It was the beginning of the ‘Holodomor’ hoax. The film was entirely funded by Ukrainian Nationalists, mainly in Canada. A Canadian scholar, Douglas Tottle, exposed the fact that the film took photographs from the 1921-22 ‘Volga famine’ and used them to illustrate the 1932-33 famine. Tottle later wrote a book, ‘Fraud, Famine, and Fascism: The Ukrainian Genocide Myth from Hitler to Harvard,’ about the phony ‘Holodomor’ issue," Professor Grover Furr told Sputnik.

Furthermore, American professor Mark B. Tauger has done groundbreaking research on the Famine of 1932-33, and come to the conclusion that the disaster was due to environmental circumstances at the time and was not related to the Soviet policy in the region, Professor Furr emphasized.

Warsaw has got its own skeletons in the closet: for instance, blasting the Soviet government for the Katyn massacre, Polish historians remain silent about the fate of 18,000 – 60,000 Red Army soldiers who died in Polish captivity in 1920s. "There is good documentation that they [the Soviet POWs] were treated brutally, starved, frozen, and many of them murdered outright," Grover C. Furr pointed out.

Slamming the USSR for the Molotov-Ribbentrop non-aggression treaty, signed in 1939, Polish scholars apparently forgot that Poland's First Marshall Jozef Pilsudski concluded the German-Polish Pact with Hitler five years earlier, in January 1934. While in 1938, Poland took part in the infamous partition of Czechoslovakia together with Nazi Germany.

"Then there are all the crimes of the Polish underground, the Armia Krajowa, and the post-war Polish underground. The AK collaborated with the Nazis, for example. They continued to murder Jews and communists, mainly Poles, after the war for years," the professor underscored.

"The only way to cover up as much of this shameful history as possible, and rationalize the rest of it, is to claim that the USSR was "just as bad as" the Nazis," Grover C. Furr elaborated.

© AFP 2020 / GENYA SAVILOV
Origins of Hate: Pre-Maidan Textbook Teaches Youth to Hate 'Subhumans'
Meanwhile in 2010, another American scholar Timothy Snyder published a study, translated into more than 25 languages, in which he blatantly equated the Soviet Union to Nazi Germany. In response, Grover C. Furr wrote his book "Blood Lies," debunking a series of widespread myths about the USSR and exposing an astonishing lack of evidence for many of anti-Russia accusations presented by Professor Snyder.

By rewriting the history of the Second World War, downplaying the significance of the Soviet Union's role in defeating Nazi Germany and manipulating the Soviet past, the West is targeting today's Russia.