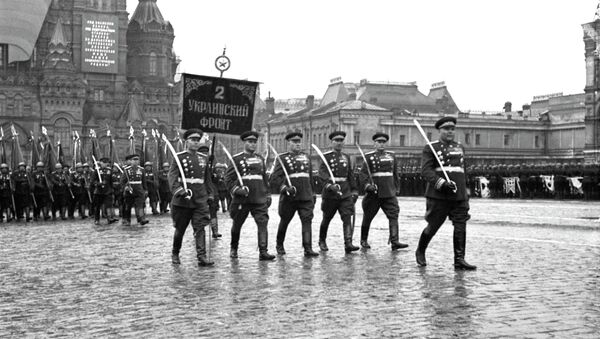 Ukrainian and Russian social media users have been voicing their outrage over Ukrainian propagandists' attempts to place Soviet wartime heroes on a par with fascist collaborators, and to connect the victory in the Great Patriotic War with the current civil war in eastern Ukraine.

Over the past several months, the Ukrainian government has been working feverishly to carefully modify the symbols and words marking the 70th anniversary of the end of the Great Patriotic War. Authorities ditched the red star and the orange and black Ribbon of Saint George in favor of a red and black poppy, and replaced the phrase 'Great Patriotic War' (1941-1945) with simply 'World War II' (1939-1945); the government has also financed a campaign to gloss over the role played by Ukrainians serving in the Soviet Red Army, adding some rather unsavory persons to its pantheon of heroes.

The government's efforts include a series of posters by the Ukrainian Institute of National Memory. The project, organized by the same institution, features not only Soviet-Ukrainian heroes, but also persons of Ukrainian origin who fought for the allied armies, including Canadians and Americans. Unfortunately, the posters also feature people who fought in the ranks of the fascist collaborationist armies, including the Ukrainian Insurgent Army (UPA) and the Organization of Ukrainian Nationalists (OUN). 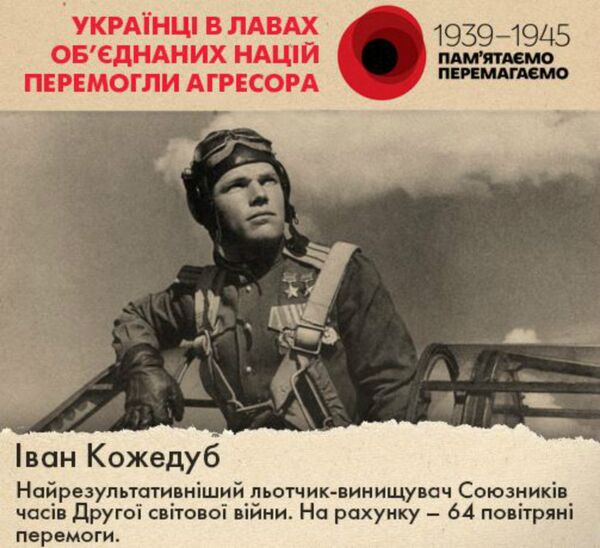 'Ukrainians In the Ranks of the United Nations Defeating the Aggressor.' Ivan Kozhedub: the greatest fighter pilot among the allies during the Second World War. -64 air victories.
© Twitter / Zakarpatska 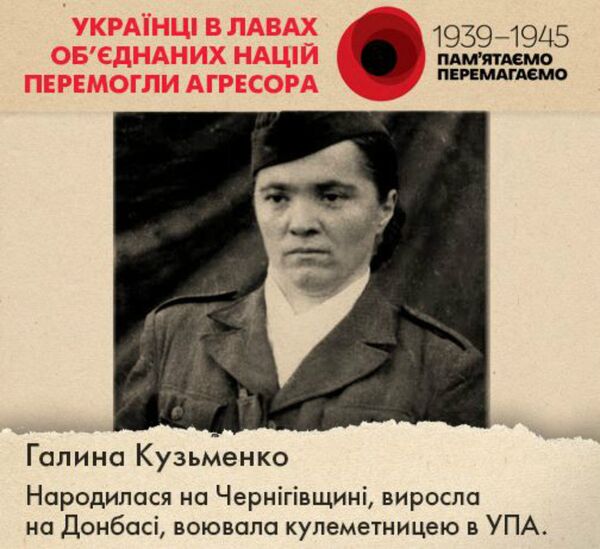 'Ukrainians In the Ranks of the United Nations Defeating the Aggressor.' Galina Kuzmenko: born in Chernihiv region, grew up in Donbass, fought as a machine gunner for UPA (Ukrainian Insurgent Army).
© Twitter / Zakarpatska

Commenting on the poster campaign, Ukrainian Facebook user Alexei noted that "there's just one snag to the campaign: while Kozhedub's contribution to victory is well known, when it comes to the contribution of the UPA 'machine gunner', even the authors of this agitprop piece are modestly silent. They must be shy."

Alexei added indignantly that "Soviet heroes were not only equalized in their services to the country with Nazi collaborators; our veterans have been deprived even of their name. Now they are not veterans who fought in the ranks of the victorious red Army for their Motherland, the Soviet Union, but only 'Ukrainians' in the ranks of the obscure 'United Nations.'

The user sarcastically asked: "who are these united nations, which the supporters of Bandera and Shukhevych were able to worm their way into? About this too the propagandists of the new version of the history of the war are silent. And they should be, because the 'machine gunner' from the UPA and the OUN ideologue Petro Poltava fought in the ranks of a very different 'united nations' – of Germany, Italy, Spain, Romania and Japan, and on the side of the 'Ukrainian state' declared in Lvov June 30, 1941, which served as an ally to the Third Reich."

Out With Red Stars and Ribbons, In With the Red and Black Poppy

Earlier this month, the Ukrainian government adopted a red and black poppy design as the official symbol of victory. Prime Minister Arseniy Yatsenyuk described the design as a "European symbol," bitterly adding "let all the other ribbons be worn [in] the Russian Federation, which claims it was Russia that won the Second World War."

Speaking to independent Russian television channel Dozhd, Sergei Mishakin, whose design studio created the symbol, noted that "we recalled the old symbol which is being used in Britain –the red poppy. And we decided to use it as a base for our symbol, but to add to it more tragedy. Really this is a hole from a bullet, from which blood comes out."

Apart from the fact that the poppy is a symbol foreign to Ukraine, first adopted by English-speaking countries following the First World War, Ukrainian and Russian social media users have also commented that the red and black design brings to mind a very different sort of symbols –the red and black bicolor flag of the Ukrainian Insurgent Army.

Youtuber and Twitter user Eugene Mit, also going by DonetskEugene, commented that in his view, the poppy is the wrong symbol to use to celebrate the end of the war. He noted that since Greek times, the poppy has been used as a symbol of sleep, death and remembrance, whereas Victory Day has traditionally been associated with celebration, peace and light.

"The red poppy as a symbol of defeat: When one changes historical symbols, one alters the essence of events."

Deciding to conflate the great victory in the Second World War with the civil war presently being fought in eastern Ukraine, a well-funded non-governmental project calling itself 'Informational Resistance' has released a series of videos featuring veterans of the Great Patriotic War together with their descendants.

The first video shows a young man serving in the Ukrainian army calling up his war veteran grandfather before going off to war, with the second featuring a young woman serving as a nurse calling her grandmother, another veteran, before running off to help a soldier injured in the present conflict. 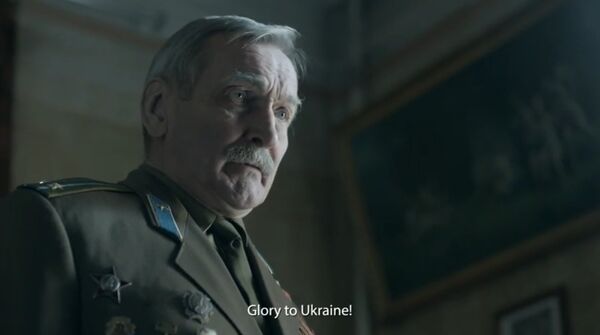 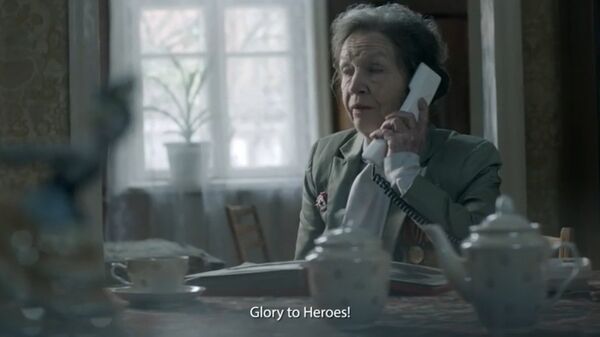 The emotional, highly-stylized vignettes, featuring the popularized post-Maidan revolutionary slogans "Glory to Ukraine!" and "Glory to Heroes!" (popularized by Bandera during the Second World War, incidentally) conclude with the message "We remember. We admire. We will win.", thus fusing the memory of the great victory in the Second World War with today's bloody civil conflict in the east.

Commenting on the video, YouTube user Roman Golovko noted: "In filming such 'patriotic' clips in which imaginary war veterans say slogans used by Bandera and urge Ukrainians to kill Ukrainians, you have betrayed the memory of the real veterans; you spit in the soul of your fathers, grandfathers and great grandfathers, who during the Great Patriotic War fought shoulder to shoulder with Russians and Belarusians, Georgians, Jews, Tatars, Ossetians, Chechens, Armenians, Azerbaijanis, Kazakhs, Uzbeks; who fought the Nazis, freed their motherland, and stormed Berlin and Prague, Vienna and Belgrade. Come to your senses; do not allow yourselves to be fooled."