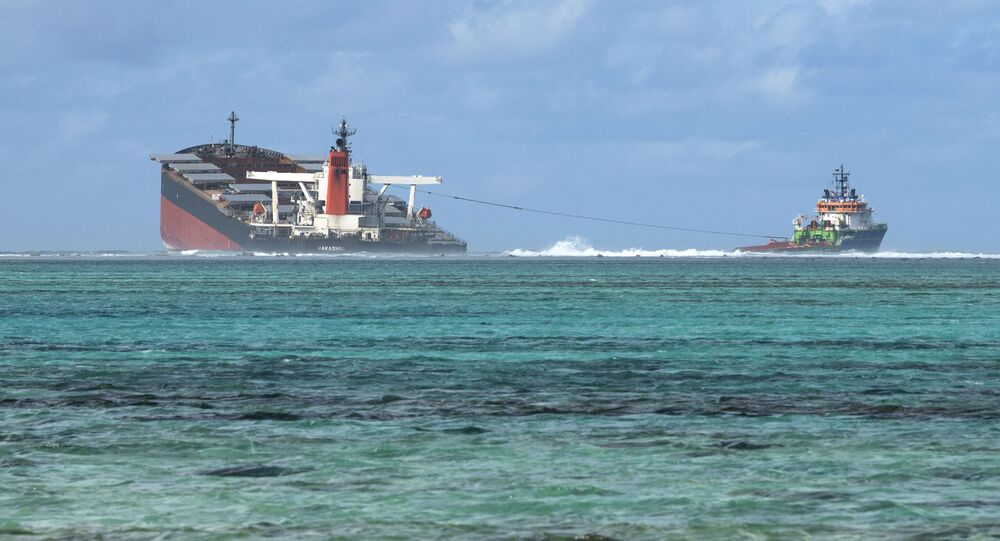 A Japanese bulk carrier that ran aground on a reef in Mauritius last month has broken apart, local authorities said.

According to aerial images, the boat has completely broken into two parts.

"At around 4.30pm [12:30 GMT], a major detachment of the vessel's forward section was observed," the Mauritius National Crisis Committee said.

The MV Wakashio, which belongs to a Japanese company but is Panamanian-flagged, ran aground on a coral reef on 25 July with 4,000 tonnes of fuel. It was on course from China to Brazil to pick up iron ore. More than 1,000 tonnes of fuel leaked into the sea, while about 1,800 more remained on board. The oil spill has spread more than seven miles from Blue Bay Marine Park on the east coast to the island of Ile aux Cerfs.

© REUTERS / MAXAR TECHNOLOGIES
A view shows Japanese bulk carrier ship MV Wakashio as it begins to break apart, after it ran aground on a reef in Mauritius, in this August 15, 2020 satellite image provided by Maxar Technologies.

Commenting on the incident earlier this week, Mauritius Prime Minister Pravind Jugnauth said that all the fuel had been pumped from the reservoirs of the ship, adding that some 100 tonnes remained elsewhere on board the vessel. The government also said that they would seek compensation from the ship's owner, Nagashiki Shipping, for losses and damages as well as for clean-up costs.

The ship's owner promised to compensate for the damage and said that the cause of the accident was not known and would be thoroughly investigated.

© AFP 2020 / FABIEN DUBESSAY
Workers collect leaked oil at the beach in Riviere des Creoles on August 15, 2020, due to the oil leaked from vessel MV Wakashio, belonging to a Japanese company but Panamanian-flagged, that ran aground near Blue Bay Marine Park off the coast of south-east Mauritius.

In the meantime, dozens of volunteers have been assisting the authorities with cleaning up the oil spill as the incident has prompted a state of 'environmental emergency' to be announced in the area.