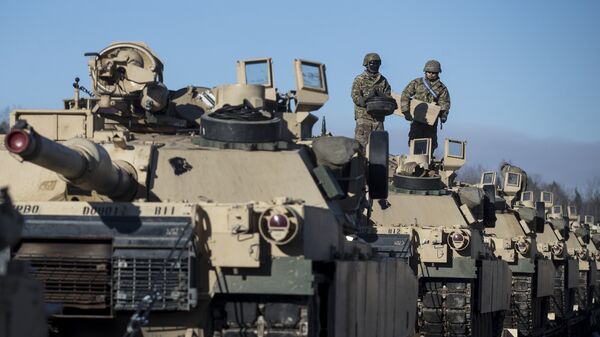 LIVE UPDATES: US May Reportedly Announce Decision on Abrams by Wednesday

Subscribe
International
India
Africa
Being updated
Russia launched its special military operation in Ukraine on February 24, 2022, after the Donetsk and Lugansk people’s republics appealed for help in defending themselves against Ukrainian provocations.
Since mid-fall 2022, Russia has been conducting high-precision strikes against Ukraine's infrastructure to prevent further terrorist attacks by Ukraine's security services, such as the attack on the Crimean bridge.
Over the past months, air raid alerts have been sounded in regions of Ukraine every day, with many parts of the country experiencing power cuts.
The United States and western countries ramped up their military support for Ukraine after Russia launched a special military operation. Recently, disagreements have begun to emerge between the US and its allies in Western Europe over the types and numbers of weapons to be supplied to Ukraine.
Follow Sputnik's Live Feed to Find Out More!
Table of contents
New firstOld first
03:40 GMT 25.01.2023

World
Russia's Ambassador Antonov: US Abrams Tanks Delivered to Ukraine Will Be Destroyed
00:04 GMT 25.01.2023
Peskov: Putin Has Not Had Contacts With Zelensky for Several Years
Russian President Vladimir Putin has not had contacts with Ukrainian President Volodymyr Zelensky for several years, Kremlin spokesman Dmitry Peskov has told Sputnik.

Putin last met with Zelensky at a Normandy Format meeting in Paris in 2019. The Russian president then held bilateral meetings with Zelensky, French President Emmanuel Macron, and then-German Chancellor Angela Merkel. Since then, Putin had a few phone conversations with Zelensky in February and March of 2020, according to the Kremlin website.

Peskov, when asked whether it was true that Putin has not had any meetings or phone conversations with Zelensky since then, replied in the affirmative. "Correct," he said.
23:02 GMT 24.01.2023
Ukraine's Kuleba: EU Considering Deliveries of F-16s to Kiev
Ukrainian Foreign Minister Dmitry Kuleba said on Tuesday that the European Union is considering the delivery of F-16 fighter jets to Kiev.

"- F-16s now? - Yes. - I am taking it to work, my friend," Kuleba published a dialogue with his alleged "European counterpart" on Facebook (banned in Russia), adding that this is the question he received from his interlocutor.

Kuleba said in March, during a meeting with US Secretary of State Antony Blinken, that Ukraine requires deliveries of military aviation and missile defense equipment the most.
21:24 GMT 24.01.2023
Report: US May Announce Decision on Abrams by Wednesday But Delivery Could Take 'Months, Years'
18:46 GMT 24.01.2023

Multimedia
Leopard 2 Tanks: Armored Beasts Berlin Decides to Send to Ukraine
18:12 GMT 24.01.2023
Pentagon Says Aware of Reports on Abrams Tanks for Ukraine, Has Nothing to Announce at This Time
The Pentagon is aware of media reports about the United States going to announce the provision of Abrams tanks to Ukraine soon, but has nothing to announce at this time, spokesperson Pat Ryder said on Tuesday.
“I am aware of the press reporting stating that the US is considering providing Abrams tanks to Ukraine. I have no announcements to make at this time,” Ryder said during a press briefing.
17:44 GMT 24.01.2023
Scholz Decided to Send Leopard 2A6 Tanks to Kiev, German Media Report

Military
Scholz Decided to Send Leopard 2A6 Tanks to Kiev, German Media Reports
17:07 GMT 24.01.2023
16:41 GMT 24.01.2023
Five Out of 7 Checkpoints on Moldovan-Ukrainian Border Resume Work
Five checkpoints on the Moldovan-Ukrainian border have resumed work, with two more remaining closed due to technical issues and power outages, Moldova's Border Police said on Tuesday.
The police have repeatedly reported the suspension of work at border-crossing points due to problems from the Ukrainian side. Earlier in the day, the police said that seven checkpoints had ceased work over technical issues.
"The border police report that the Ocnita-Sokyryany, Mirnoe-Tabaky, Larga-Kelmentsy, Criva-Mamalyha and Palanca-Mayaky-Udobne checkpoints have resumed their work," the police said on Telegram.
Two more border crossings, Briceni-Rososhany and Ceadir-Lunga-Novi Troyany, remain closed.
A total of 35 checkpoints operate on the Moldovan-Ukrainian border, while another 21 are located on the border between the breakaway republic of Transnistria and Ukraine, and have been suspended since February on Kiev's decision.
16:16 GMT 24.01.2023
Finnish President Pays Official Visit to Kiev to Discuss Current Situation in Ukraine
Finnish President Sauli Niinisto has arrived in Kiev on Tuesday 24 January to discuss the current situation in the country with Ukrainian President Volodymyr Zelensky, the Finnish president’s office said on Tuesday.
"The visit underlines Finland’s strong and continuous support to Ukraine. The Presidents will discuss the current situation concerning the war of aggression that Russia started 11 months ago," the office said in a statement.
Niinisto and Zelensky will also discuss Finland’s material support to Ukraine, the statement added.
The Finnish leader is also expected to visit Borodyanka and Bucha, as well as to lay a wreath at the Wall of Remembrance in Kiev, the statement read.
15:02 GMT 24.01.2023
Biden Administration Leaning Toward Transferring 'Significant Number' of Abrams M1 Tanks to Kiev, US Media Reports

Military
Biden Administration May Transfer ‘Significant Number’ of Abrams M1 Tanks to Ukraine: Reports
13:36 GMT 24.01.2023
Civilian Killed by Shelling in Village of Aleksandrovka on Outskirts of Donetsk
A civilian in the village of Aleksandrovka on the outskirts of Donetsk died on Tuesday as a result of shelling by the Ukrainian Armed Forces. This was reported by the Donetsk People's Republic's territorial defense headquarter.
"The Ukrainian Armed Forces killed a civilian when shelling the village of Aleksandrovka in the Petrovsky district of Donetsk," said a message in the social media channel of the headquarters. According to the representation of the DPR in the Joint Center for Control and Coordination of issues related to Ukraine's war crimes, the shelling was recorded at 15:00 Moscow time.
"Five shells of 155 mm caliber were fired," stated center in its channel.
12:49 GMT 24.01.2023
Russia’s MoD Latest Statements on Special Op in Ukraine:
Russia’s aviation and artillery inflicted fire damage on the Armed Forces of Ukraine in the Kharkov region, which resulted in the elimination of over 40 Ukrainian servicemen, an armored fighting vehicle, and a motor vehicle.
Russia’s artillery fire hit units of the Ukrainian Armed Forces in the LPR and DPR. Over 30 Ukrainian troops, five armored combat vehicles, an M-777 artillery system, and two US-made AN/TPQ-37 counter-battery radar stations were destroyed.
Russian troops continue their offensive in the DPR. Army Aviation, Missile Troops and Artillery engaged the 25th Airborne Assault Brigade of the Armed Forces of Ukraine in the DPR.
Near Zaporozhye, during the day, artillery fire and Eastern Military District units have destroyed more than 25 Ukrainian servicemen, as well as an Akatsiya self-propelled howitzer, two D-20 and D-30 howitzers, and three motor vehicles.
Airborne Troops artillery has destroyed a US-made AN/TPQ-50 counter-battery radar station in Kherson region.
The Operational-Tactical Aviation, Missile Troops and Artillery of the Armed Forces of the Russian Federation hit the command post of the 57th Separate Mechanized Brigade of the Armed Forces of Ukraine and a dump of artillery munition in the DPR.
Russian Aerospace Forces obliterated a self-propelled fire unit of the Ukrainian Buk-M1 SAM system.
Ten Ukrainian unmanned aerial vehicles were shot down by anti-aircraft defense forces over the past 24 hours.
Some 376 airplanes and 203 helicopters, 2,944 unmanned aerial vehicles, 402 anti-aircraft missile systems, 7,614 tanks and other armored fighting vehicles, 988 combat vehicles equipped with multiple rocket-launching systems, 3,898 field artillery cannons and mortars, as well as 8,159 units of special military hardware have been destroyed during the special military operation.
Check Sputnik's Telegram channel to find out more
12:42 GMT 24.01.2023
Air Raid Declared in Five Regions of Ukraine
An air alert has been declared in Kharkov, Sumy, Poltava, Dnepropetrovsk and Kirovograd regions of Ukraine, as well as in the Kiev-controlled part of Zaporozhye region, according to the online map of the Ukrainian Ministry of Digital Transformation.
According to the data, the alert was declared in the regions at 13.56 (14.56 Moscow time).
The Russian Armed Forces began striking Ukrainian infrastructure on October 10, two days after the terrorist attack on the Crimean bridge, which, according to Russian authorities, Ukrainian special services were behind. The strikes targeted energy, defense industry, military administration facilities. Since then, an air alert has been declared every day in Ukrainian regions, sometimes all over the country.
12:32 GMT 24.01.2023
Poland Expecting Prompt Response From Germany to Request Regarding Sending Leopard Tanks to Ukraine
Polish Prime Minister Mateusz Morawiecki said that the Polish authorities were waiting for a quick response from the German government to the request to allow the transfer of Leopard tanks to Ukraine.
"I hope that the answer from Germany will come quickly this time," he said, rebuking Germany for constantly dragging out the resolution of such issues. "We can clearly see that they don't want to broadly help a defensive Ukraine," Morawiecki noted.
"What does this mean? Fear or misunderstood fears to the end, or faith in the possibility of restoring normal relations with Russia? It is worth asking these questions. Because the coalition of countries that want to help Ukraine <...> must expand. Germany is the largest country, and it should make a huge contribution to the common coalition of countries that help Ukraine," the head of the Polish government added.
Earlier, Polish Prime Minister Mateusz Morawiecki said that Warsaw would form an alternative coalition of countries ready to supply tanks to Ukraine if Germany does not agree to transfer the vehicles. Morawiecki also added that Poland had already decided to supply Ukraine with a tank company of up to 14 vehicles and would act at its own discretion regardless of Berlin's position.
10:42 GMT 24.01.2023
Stoltenberg Confident NATO Will Reach Consensus on Ukraine Tanks
MOSCOW (Sputnik) - NATO member-states will soon find a solution to the alliance' split on whether or not to send tanks to Ukraine, NATO Secretary General Jens Stoltenberg said on Tuesday.

"We discussed the issue of battle tanks consultations among allies. Will continue, and I am confident that we will have a solution soon," Stoltenberg said during a press conference with German Defense Minister Boris Pistorius in Berlin.

Discordant opinions emerged among NATO countries this month about sending battle tanks to Ukraine in connection with the latest developments on the front line in the Donetsk People’s Republic. The main snag was Germany's reluctance to send its Leopard 2 tanks to Kiev.

On January 11, Polish President Andrzej Duda, during his visit to the western Ukrainian city of Lvov, said his country would hand over a batch of German-made Leopard tanks to Ukraine as part of an international coalition. In addition, last week, Polish Prime Minister Mateusz Morawiecki said that Warsaw could transfer its Leopard tanks to Ukraine without Germany's consent.