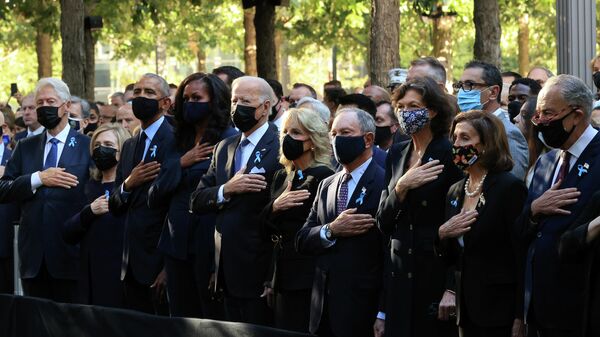 Twenty years ago, a series of coordinated attacks on multiple targets in the US by al-Qaeda terrorists claimed the lives of nearly 3,000 innocent people. One of the deadliest terror attacks in the history of humankind led the US to declare a "War on Terror" and invade Afghanistan in what became America's longest war.
On this day twenty years ago, the world was shaken by terror attacks that would forever leave an imprint of sorrow and grief on the lives of the survivors, witnesses, and those who lost their loved ones, in the tragedy that would be known as 9/11.
On 11 September 2001, nineteen Al-Qaeda* terrorists hijacked four commercial planes and carried out suicide attacks against targets in the United States. Two of the planes were flown into the twin towers of the World Trade Center in New York City, a third plane hit the Pentagon just outside Washington, DC, and the fourth aircraft crashed in a field in Shanksville, Pennsylvania.
As a result of the attacks, apart from 19 terrorists, 2,977 people died, while 25,000 were injured.
Less than a month later, the United States invaded Afghanistan after then-president George Bush announced the beginning of the "War on Terror" to dismantle al-Qaeda and stop it from using Afghan soil as a launching pad for international terrorist attacks by toppling the Taliban* rulers. The US wrapped up its longest war in late August 2021, with a chaotic evacuation mission. Despite a nearly 20-year military presence in Afghanistan, American troops and the US-trained Afghan army were unable to stop the Taliban from coming back to power.
Follow Sputnik's Live Feed to Find Out More!
*A terrorist group outlawed in Russia and many other countries.
Table of contents
New firstOld first
00:23 GMT 12.09.2021
Biden Commemorates Victims of 9/11 Attacks at Pentagon
WASHINGTON (Sputnik) - US President Joe Biden has attended a wreath-laying ceremony at the Pentagon to commemorate 9/11 victims on the 20th anniversary of the terrorist attacks.

The US President and First Lady Jill Biden were joined at the Pentagon on Saturday by Defense Secretary Lloyd Austin and Chairman of the Joint Chiefs of Staff Gen. Mark Milley, as well as US Vice President Kamala Harris and second gentleman Douglas Emhoff.

The Bidens arrived at the Pentagon after visiting the 9/11 memorial in the city of Shanksville, Pennsylvania, and Ground Zero in New York City. The president did not deliver any remarks at any of the 9/11 sites on Saturday.

9/11: 20 Years Later
George W. Bush Warns US Threatened by 'Violence That Gathers Within' in 9/11 Anniversary Speech
17:24 GMT 11.09.2021
Biden Commemorates Victims of 9/11 Attacks by Laying Wreaths, Attending Ceremonies
US President Joe Biden laid wreaths to the memorial in the city of Shanksville, Pennsylvania, on Saturday to commemorate the victims of the September 11, 2001 terrorist attacks.

Biden and his wife Jill spent almost an hour at the memorial. He did not deliver remarks but spoke with families of the victims, according to live broadcasts of major TV stations.
In the morning, the US leader and his wife attended the ceremony in New York, where two planes hijacked by terrorists hit the World Trade Centre's twin towers 20 years ago. Later in the afternoon, Biden is expected to visit the Pentagon, which became another target of extremists that day.

On September 11, 2001, 19 al-Qaeda (a terrorist organization banned in Russia) terrorists hijacked four commercial planes. Two of the planes were flown into the World Trade Center towers in New York. Another plane struck the west side of the Pentagon, and yet another one crashed in Pennsylvania before reaching its presumed target.
15:52 GMT 11.09.2021
Donald Trump Speaks on the20th Anniversary of 9/11 Attacks
15:42 GMT 11.09.2021
Bruce Springsteen Performs a Song Dedicated to 'Our Fallen Brothers and Sisters'

The #911Anniversary ceremony in New York is heartbreaking to watch.

Such a long list of names being read out right now, including many by young family members who never got to meet them.

Also this Bruce Springsteen performance - so moving and apt.

9/11: 20 Years Later
Harris: September 11 Attacks Anniversary Reminds Americans Unity Can Be Achieved
15:10 GMT 11.09.2021
Terrorists Can’t Destroy 'Idea That Is America', Commander of Joint Chiefs of Staff Says
Terrorists who organized attacks on September 11, 2001 and their followers can not destroy the spirit of the United States, Commander of the Joint Chiefs of Staff Mark Milley said on Saturday.

"While we grieve for our fallen, we celebrate the life they led. Their legacy lives on the idea that is America. No terrorist can destroy that idea," Milley said during the ceremony at the Pentagon.

Ideas of freedom, human rights and other values are still hated by US enemies, including al Qaeda, the Islamic State, the Taliban (all three terrorist groups banned in Russia), "the fascists, the Nazis, the communists," authoritarians and dictators, he added.

On this day 20 years ago, al-Qaeda (a terrorist organization banned in Russia) terrorists hijacked four commercial airplanes. Two of the planes were flown into the World Trade Center towers in New York. Another plane struck the west side of the Pentagon, and yet another one crashed in Pennsylvania before reaching its presumed target. Nearly 3,000 lives were claimed in the attacks.
14:48 GMT 11.09.2021
Macron Pays His Respects to 9/11 Victims

Just as they did at Buckingham Palace twenty years ago to show solidarity with our US allies, the Band of the @WelshGuards this morning played the US National Anthem at changing of the guard. #911Memorial #NeverForget @Corpsarmymusic @RoyalFamily @UKinUSA @BritishArmy pic.twitter.com/YNktnO5HwE

The Queen’s message to the President of the United States on the 20th anniversary of the attacks on 11th September 2001. pic.twitter.com/jsdH4X50Ao

The woman, wearing a T-shirt that read "9/11 should be alive. Truth and justice," broke through the barriers erected around the Ground Zero which is being attended by US President Joe Biden along with First Lady Jill Biden and former President Barack Obama.

"I have no idea how she got in," a police officer told Sputnik when asked how the activist broke through the fences guarded by hundreds of officers from the NYPD, FBI and New York Port Authority.

The woman was trying to confront the police and fight back shouting to the crowd of bystanders "Help me, do something, please!" but was eventually apprehended by five officers.
13:48 GMT 11.09.2021 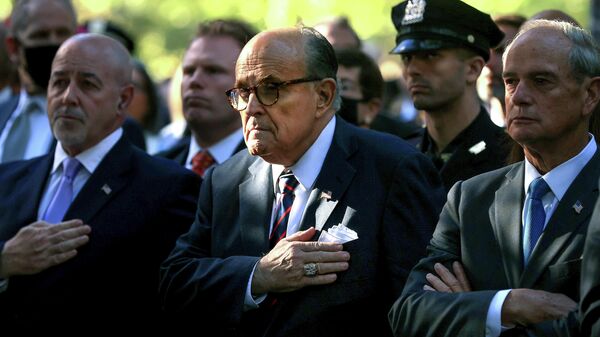 © REUTERS / POOL
13:38 GMT 11.09.2021
Russian Churches in US to Commemorate 9/11 Victims With Special Prayers
WASHINGTON (Sputnik) – Russian Orthodox churches in the United States, which belong to the Russian Orthodox Church Outside of Russia (ROCOR), will commemorate victims of the 11 September terror attacks by conducting special prayers on Saturday, ROCOR First Hierarch Metropolitan Hilarion (Kapral) told Sputnik.
"I think everybody will be remembering this disaster," Metropolitan Hilarion said, adding that prayers will be served at the divine liturgies in honor of the feast of the Beheading of St. John the Baptist, which the Russian Orthodox Church celebrates on Saturday.
While the ROCOR did not issue special decree on 11 September commemoration, each priest will decide what to do, he noted.
"I was in Australia when this happened. It did not affect Australia directly, but we were shocked and of course prayed for people here," the metropolitan, who was serving as Bishop of Sydney, Australia and New Zealand in 2001, recalled.
13:34 GMT 11.09.2021