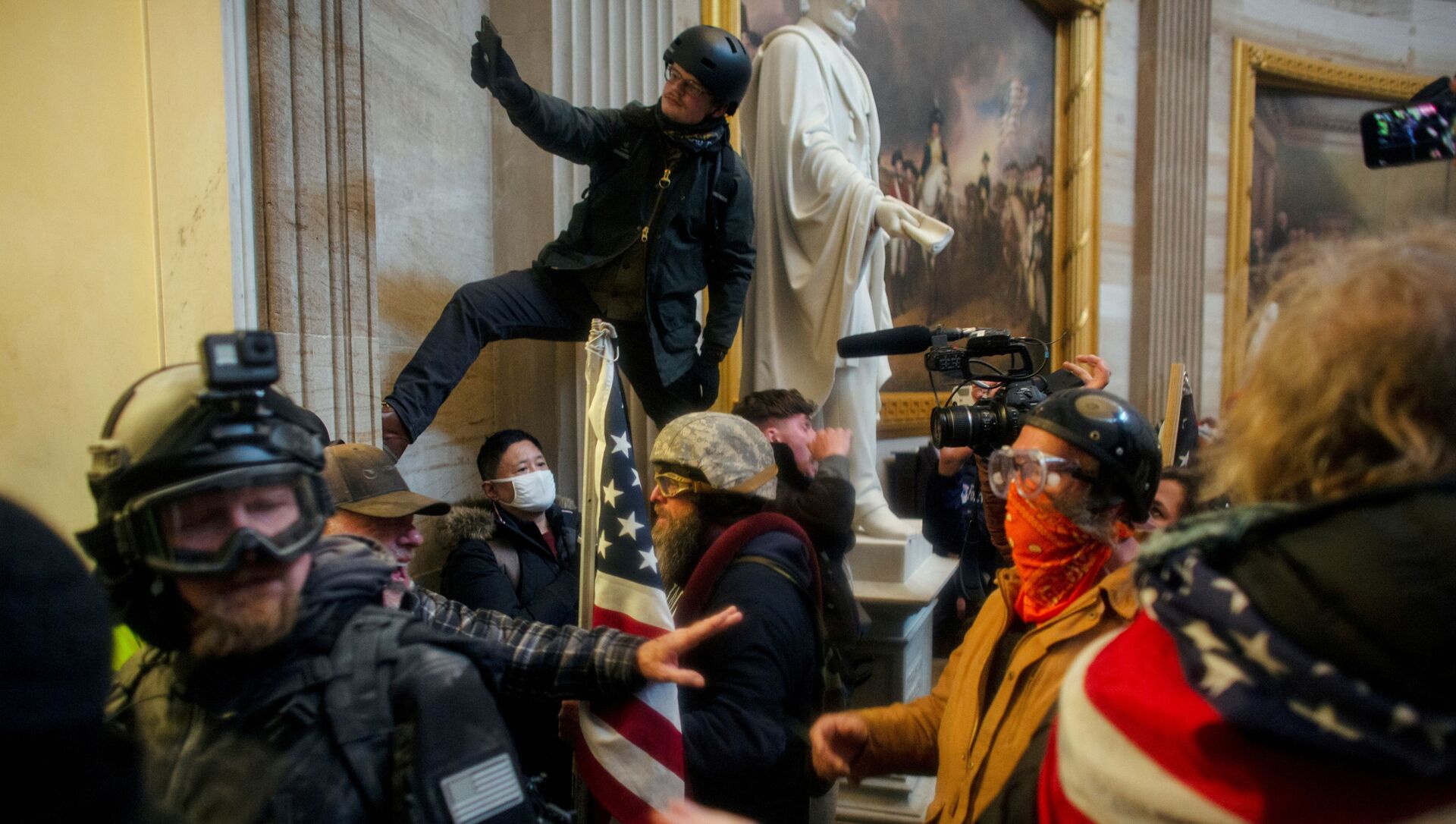 Ilya Tsukanov
All materialsWrite to the author
The 6 January Capitol attacks in Washington, DC saw droves of Trump supporters storming the nation’s legislative chambers in a last-ditch attempt to stop Congress’s certification of the November 2020 election, which they believed was ‘stolen’. The mayhem soon became the pretext for a number of initiatives to permanently bar Trump from politics.

“We know that because without fail, the government has thrown the book at most people who were present in the capital on January 6. There was a nationwide dragnet to find them, and many of them are still in solitary confinement tonight. But strangely, some of the key people who participated on January 6 have not been charged…The government calls those people unindicted co-conspirators. What does that mean? Well it means that in potentially every single case they were FBI operatives,” the host added.

Tucker cited the example of a mystery individual identified in court filings only as “Person Two,” who stayed in the same hotel room as Thomas Caldwell, a 65-year-old Virginia man alleged to belong to the Oath Keepers, described by the Justice Department as a “paramilitary” and “militia” group which was involved in the Capitol unrest.

According to a DoJ filing against Caldwell his alleged co-conspirators, the retiree joined “Person Two and others known and unknown in storming past barricades and climbing stairs up to a balcony on the west side of the Capitol building.” 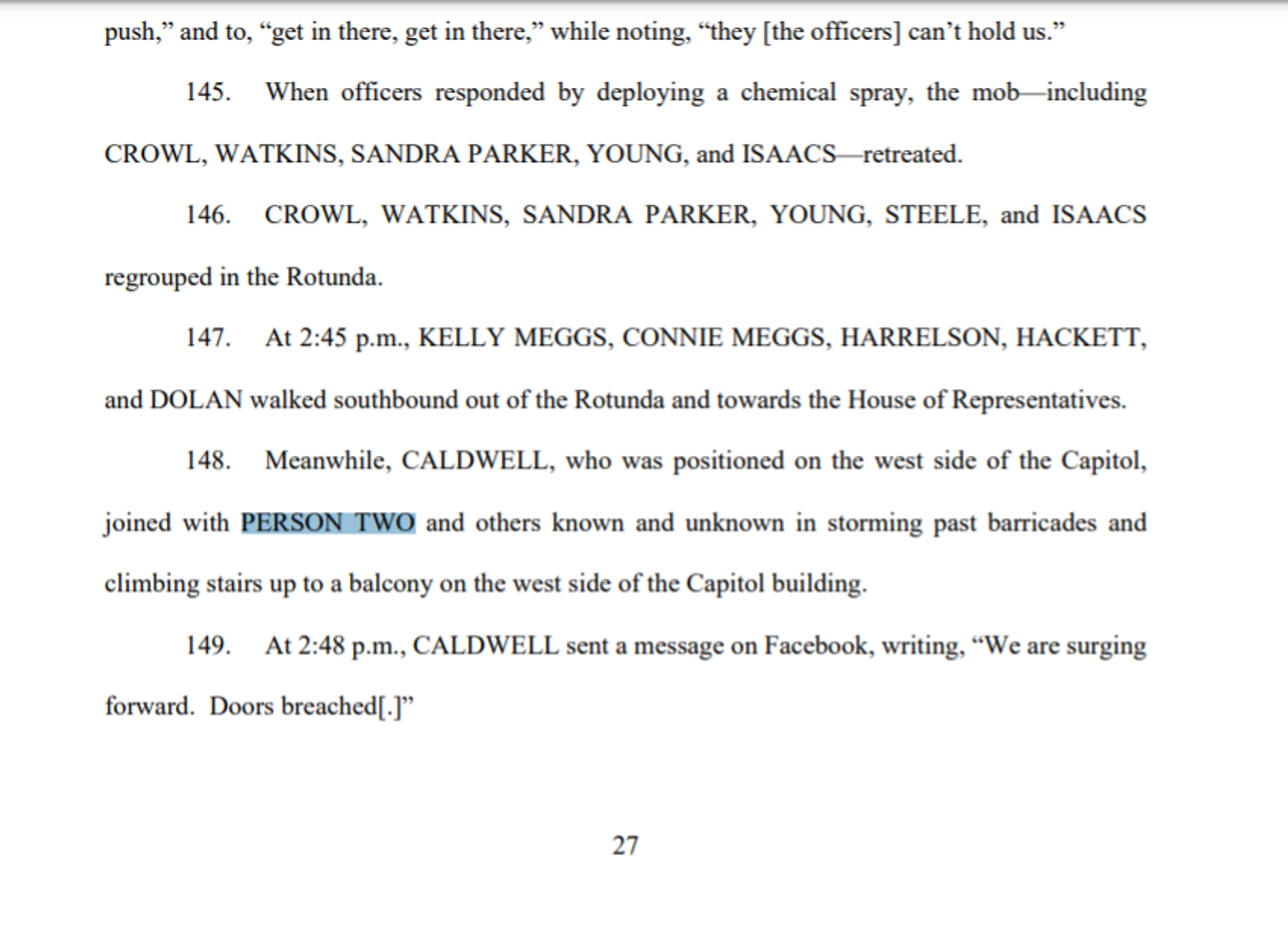 The same filing contains 19 other unidentified individuals, listed simply as persons One through Twenty. All of them are alleged to have taken part in the organization, planning and execution of the mayhem on 6 January in various capacities. 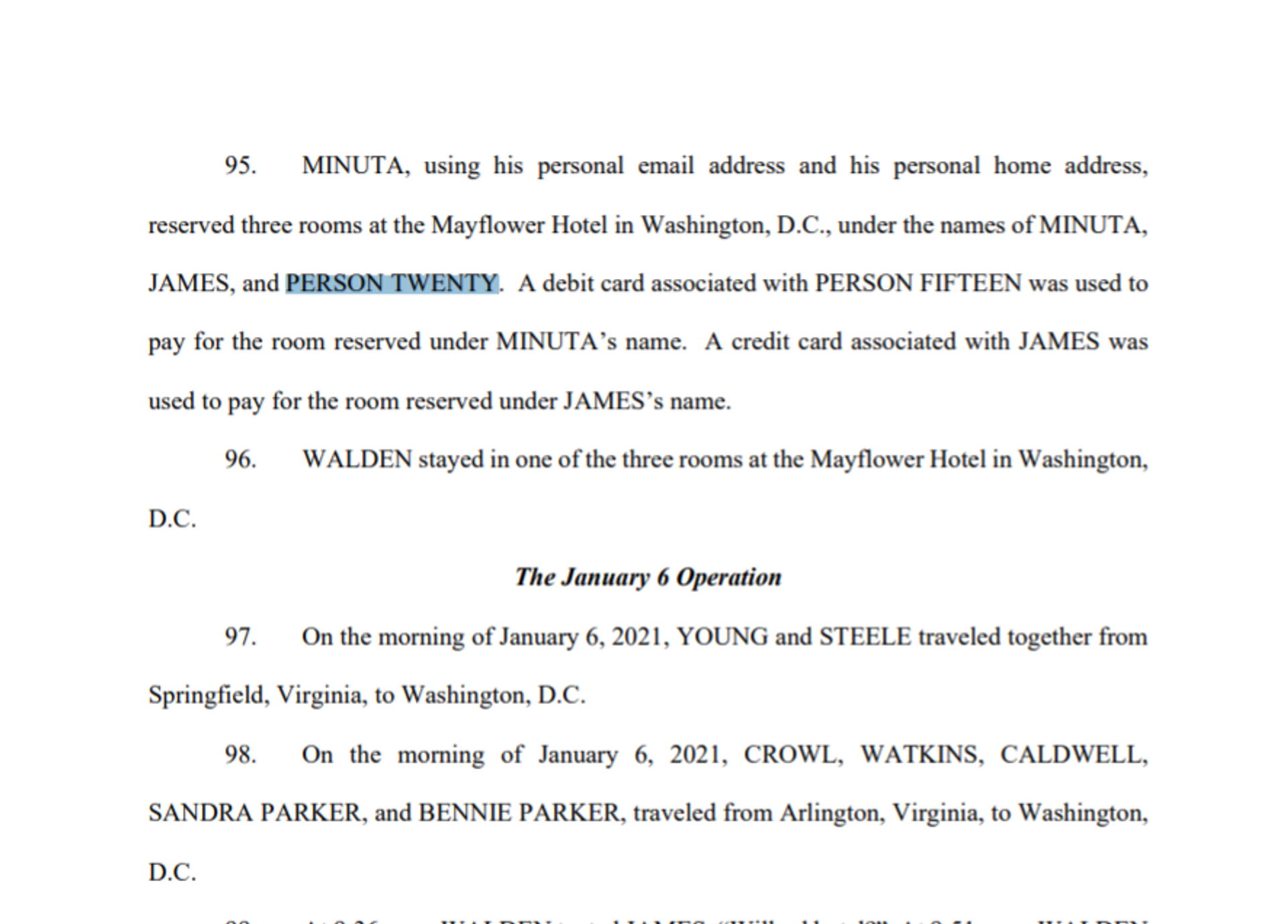 The DoJ filing also shows that Caldwell believed that a so-called “Quick Reaction Force,” put together by another unnamed co-conspirator - ‘Person Three’, would be activated during the insurrection.

“Here’s the interesting thing: Person Two and Person Three were organisers of the riot. The government knows who they are, but the government has not charged them. Why is that?” Tucker asked. “You know why: they were almost certainly working for the FBI. So FBI operatives were organising the attack on the Capitol on January 6, according to government documents.”

“So it turns out that this ‘white supremacist insurrection’, was, by the government’s own admission in these documents organised at least in part by government agents,” Tucker added. He went on to suggest that the information would be shocking if not for FBI Director Christopher Wray’s admission in March that the agency was heavily involved in infiltrating potential extremist and ‘domestic terrorist’ groups inside the United States.

The Fox host based his segment on a report by Revolver.News, an alternative news outlet popular among Trump supporters. Sputnik has confirmed the veracity of the outlet’s citations of the DoJ’s criminal indictment against Caldwell and others, and the existence of the twenty ‘unnamed co-conspirators’.

Over 550 people have been charged in the Capitol insurrection to date, with charges ranging from assault on law enforcement to trespassing on government property and property damage. The riots took place as Congress met to formally certify Joe Biden’s victory in the November election. Before the certification, Donald Trump spent weeks claiming that his opponents had ‘cheated’ him out of victory using mail-in vote dumps, voting machine manipulations, and other illegal means, and his campaign filed lawsuits in over half-a-dozen states. No state courts agreed to hear Trump’s cases, and in December the Supreme Court threw out an appeal by the State of Texas to investigate the alleged fraud. Biden and the Democrats dismissed the fraud claims as a conspiracy theory. 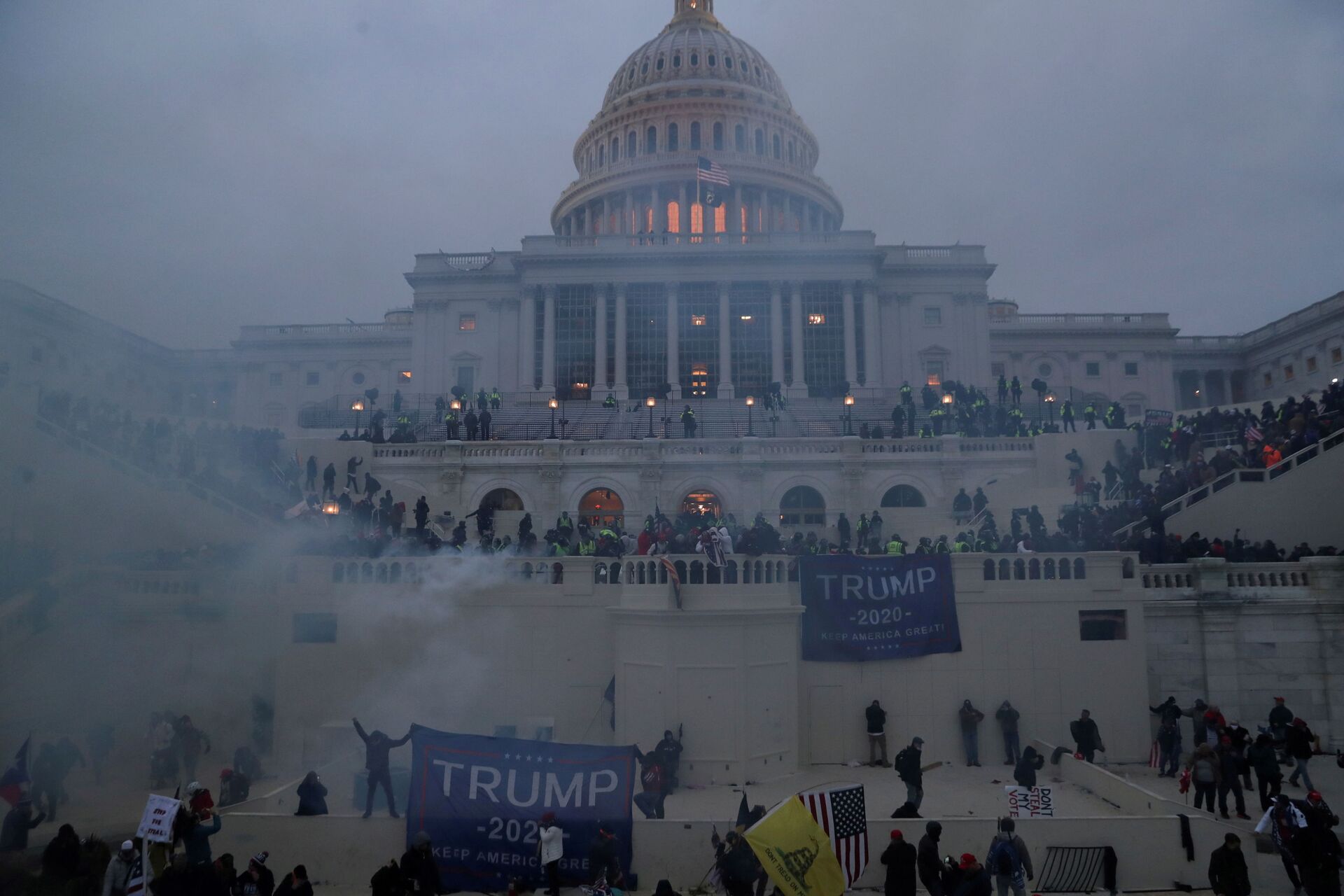 The Capitol riots took place about 2 miles (3.2 km) from the White House, where Trump had organised a separate ‘stop the steal’ rally against Congress’s certification of the election. While the president called on his supporters to “never give up” and to “fight like hell” in his speech, he also urged people to “stay peaceful” and “go home” on Twitter after violence broke out at the Capitol.

Five people, including a Capitol police officer, were killed in the 6 January mayhem, which Democrats, Democrat-aligned social media and even some anti-Trump Republicans blamed on the president. Twitter and Facebook banned Trump from their platforms for ‘inciting violence’, and Democratic lawmakers in the House used the events to impeach him for a second time to bar him from ever running for public office again.

Dems Hiding Jan 6 Capitol Footage That Belies ‘Riot’ Claim, Says GOP Congressman
The impeachment trial collapsed in the Senate in February, when Trump was already out of office. Since then, lawmakers have made fresh attempts to somehow prevent the real estate mogul from making a new run for the White House in 2024. On Tuesday, the Democrat-led House Oversight and Reform Committee accused Trump and his staff of illegally pressuring the Justice Department to investigate “conspiracy theories” about election fraud. Others have sought to block Trump by invoking the 14th Amendment of the Constitution, which prohibits any person who “engaged in insurrection or rebellion” against the United States from holding office. Trump has dismissed the “insurrection” charges.
Newsfeed
0
Access to the chat has been blocked for violating the rules . You will be able to participate again through:∞. If you do not agree with the blocking, please use the feedback form
The discussion is closed. You can participate in the discussion within 24 hours after the publication of the article.
To participate in the discussion
log in or register
loader
Chats
Заголовок открываемого материала