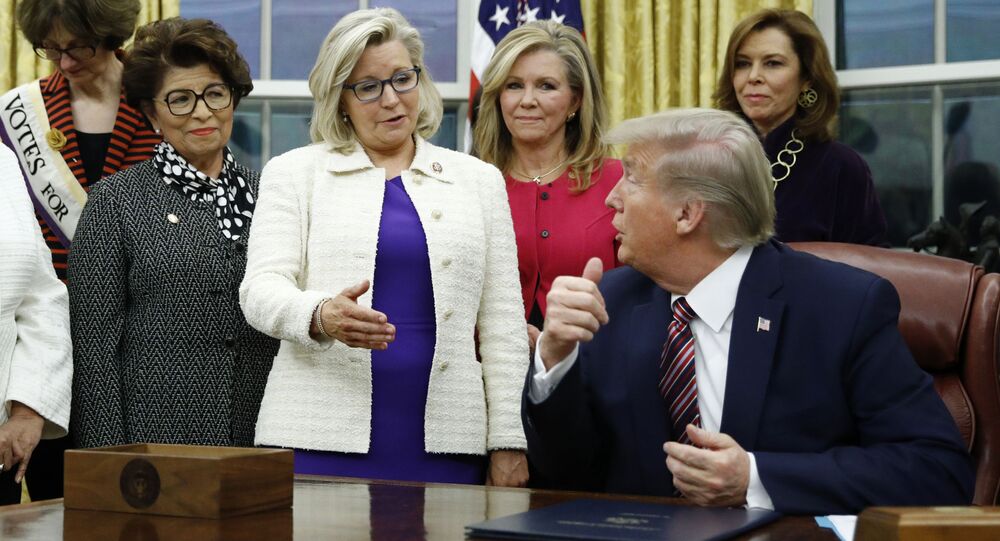 Liz Cheney, the Wyoming congresswoman and daughter of once powerful GOP grandee and Iraq War architect Dick Cheney, is again facing expulsion from the leadership of her own party over her stance on Donald Trump – a representative of the more assertively anti-globalist, less aggressively interventionist wing of the Republican Party.

Senior GOP leaders are plotting a new push to purge Liz Cheney, one of the most vocal leaders of the "Never-Trump Republicans"-turned-darling of Democrats and liberal mainstream media, over her latest effort to purge the party of Trumpists.

Cheney, chairwoman of the House Republican Conference, the number three job in the legislative chamber, has been under attack from the pro-Trump wing of her party since January after she joined Democrats in voting to impeach the president over the 6 January riots in a bid to prevent him from ever running for office again. Pro-Trump Republicans, furious over her decision to vote blue, sought to kick Cheney out of the GOP’s leadership, or even remove her from the party altogether, over her impeachment stance. The impeachment trial, Trump’s second, collapsed in the Senate in February, weeks after the former president was already out of office.

At the time, senior members of the GOP’s neoconservative old guard, from former President George W. Bush to former Bush and Trump White House official John "Never Saw a War He Didn’t Like" Bolton, came out in Cheney’s defence, with Bolton suggesting that the Republicans managed to avoid a “disaster” by voting to keep Cheney in her post. Cheney survived removal by a 145-61 vote (a 2/3 vote was required to replace her), only to be censured by Republicans in her own home state of Wyoming days later in a 74-8 leadership vote.

Cheney dismissed the censure motion and continued her crusade against the New York real-estate mogul, who walloped all of his more traditional Republican opponents in 2016, including the Bush dynasty’s Jeb (!) Bush, before winning the presidency and setting the GOP on a new paleoconservative course ostensibly aimed at bringing manufacturing jobs back to America and reducing foreign entanglements.

Late last month, Trump attacked Cheney in his traditional bombastic fashion after she announced that she was considering a presidential run, claiming that she was “polling sooo low in Wyoming, and has sooo little support, even from the Wyoming Republican Party”. Trump, who bragged in his farewell address about being the “first president who has started no new wars”, went on to call Cheney a “warmongering fool” and suggested that she wanted to keep US troops deployed in the Middle East and Afghanistan “for another 19 years”.

Throughout her years in politics, Cheney has marketed herself as a proponent of traditional Republican policies from the pre-Trump era, including support for military adventurism abroad and the Bush-era foreign policy of pre-emptive invasions of other countries.

That brings us to the events of this week. On Tuesday and Wednesday, senior House Republicans, including House Minority Leader Kevin McCarthy and Steve Scalise, party whip and the GOP’s House number two, threw their weight behind fellow GOP lawmaker Elise Stefanik’s new push to oust Cheney, with Trump immediately announcing his support for Stefanik as the Wyoming congresswoman’s replacement as House Republican Conference chair. The vote to oust Cheney will take place on 12 May, once again requiring 2/3 support from the Republican caucus to succeed.

In comments caught by a hot mic, McCarthy revealed that he had “had it” with Cheney and had “lost confidence” in her ability to lead, and suggested that she’s “got real problems”.

Cheney’s supporters again came to her defence, with Meghan McCain, daughter of the late senator John McCain, another Never-Trump Republican, going on The View to accuse the GOP of “shivving [Cheney] for her going on television multiple times and saying that the election wasn’t stolen, and for refusing to debase herself to Cheeto Jesus”, (i.e. Trump). McCain went on to play the gender card, accusing Republicans of seeking to get rid of smart female leaders and trying to turn Congress into a “sausage fest of MAGA up on Capitol Hill”.

On Thursday, in a final shot across the bow ahead of next Wednesday’s vote, Liz Cheney published an op-ed in The Washington Post in which she warned that the GOP was “at a turning point” and that “history is watching us” amid Trump’s continuing influence on the party.

In the op-ed, the congresswoman accused Trump of fomenting violence by refusing to recognize Joe Biden’s victory in the 2020 election, and of “seeking to unravel critical elements of our constitutional structure that make democracy work – confidence in the result of elections and the rule of law”. Cheney went on to tout herself as a “conservative Republican”, a fighter against “the dangerous and anti-democratic Trump cult of personality”, and urged her fellow party members not to join “Trump’s crusade to delegitimize and undo” the 2020 election.

Aware of the former president’s continued popularity among the Republican base, Cheney suggested that “while embracing or ignoring Trump’s statements might seem attractive to some for fundraising and political purposes, that approach will do profound long-term damage to our party and our country”. She added that she would continue to “defend the basic principles that underpin and protect our freedom and our democratic process”, “no matter what the short-term political consequences might be”.

© REUTERS / Dado Ruvic
GOP Heavyweights Slam Big Tech Over Trump Facebook Ban, Fueling 2024 Campaign Rumors
In addition to the new breed of Republican leaders Trump brought into the party in the 2016, 2018, and 2020 elections, Republican leaders’ continued fealty to Trump in the wake of 2020 and resistance to returning to a pre-Trump era is largely explicable by opinion polling.

According to a recent poll by SSRS, two-thirds of Republicans continue to believe or suspect that the election was stolen from Trump. A separate poll by NBC News found that some 44 percent of Republicans support the former president more than they do the Republican Party itself. That means that as long as Trump and his followers continue to dominate their party’s politics, anti-Trump forces won’t be able to return the party to its Bush-Cheney "glory days".