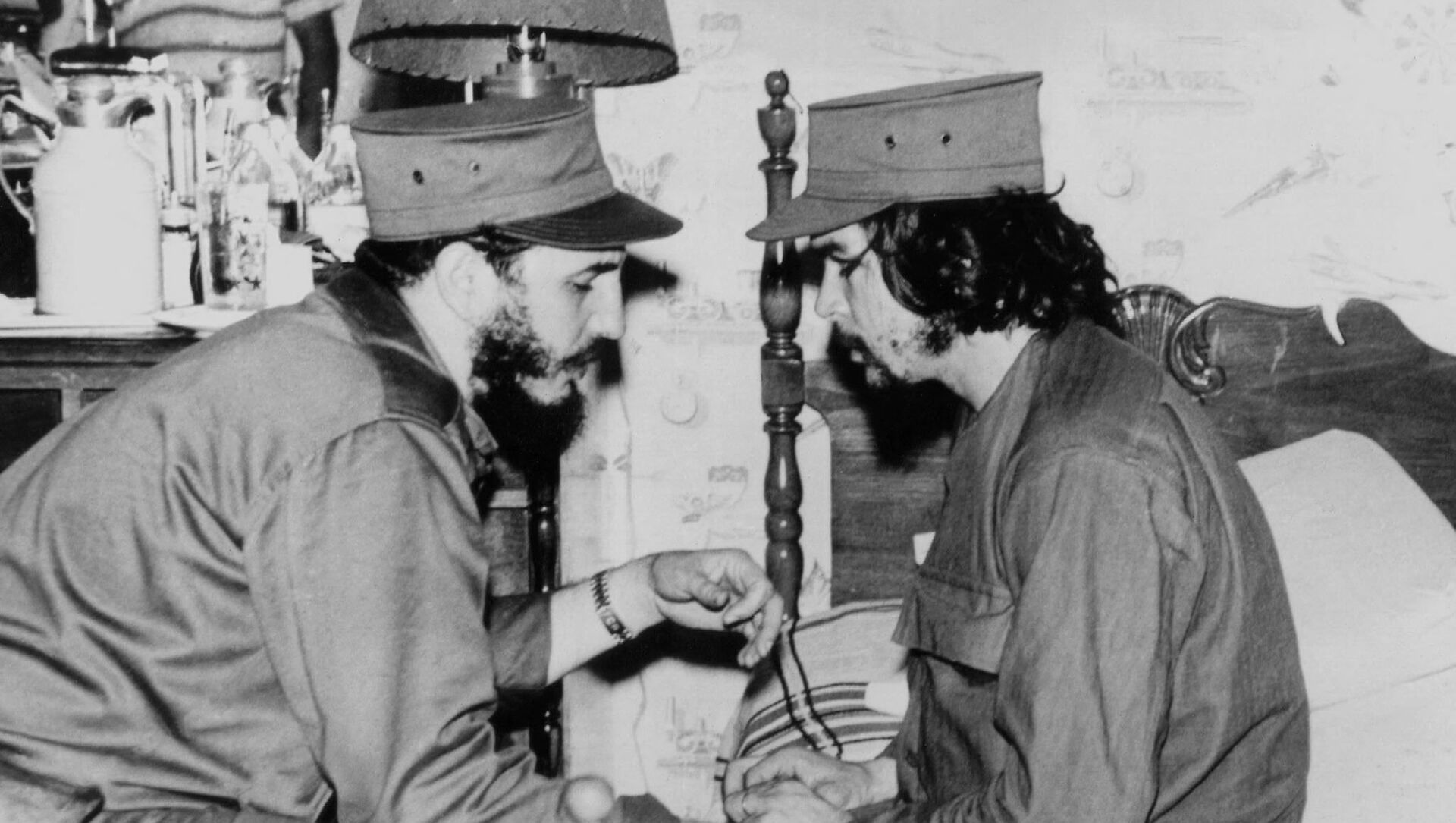 Ekaterina Blinova
All materialsWrite to the author
While Argentina-born Cuban revolutionary hero Ernesto "Che" Guevara would be 93 on 14 June 2021, the island is finalising testing its domestically made anti-coronavirus vaccines as the end of the pandemic is nowhere in sight. Latin America experts have shed light on how Che and Fidel laid the ground for Cuba's healthcare and biotech development.

Cuba's biotechnological industry is gaining momentum amid the COVID outbreak despite US economic sanctions and constant political pressure. The nation's Finlay Institute for Vaccines (IFV) has created three anti-COVID jabs, namely Soberana 01, Soberana 02, and Soberana Plus, while another two, Abdala and Mambisa, have been made by the Centre for Genetic Engineering and Biotechnology (CIGB).

"Fidel was the demiurg of the [Cuban] biotechnology project", says Dr Heinz Dieterich, director of the Centre for Transition Sciences (CTS) at the Autonomous Metropolitan University in Mexico City, and coordinator at the World Advanced Research Project (WARP). "[However], Che's example and medical proficiency provided important input in the course of the revolutionary development".

In 1948, Guevara began attending Buenos Aires University to study medicine and in 1953 he qualified as a physician, specialising in dermatology. At that time, the young doctor became influenced by the concept of "social medicine".

Today, 14 June, marks what would have been Ernesto "Che" Guevara's 93rd Birthday.
Happy Birthday Che ✊
“If you tremble with indignation at every injustice then you are a comrade of mine.” #CheGuevara pic.twitter.com/71K6hZp6ve

​"Healthcare is divided in two big sections: preventive medicine and curative medicine", explains Dieterich. "Social medicine in its revolutionary sense is adequate preventive and therapeutic healthcare for all citizens, independent of their wealth, gender, age, etc".

​Although Guevara de la Serna was an upper-class family, Ernesto's nine-month journey across Latin America in 1951 had a great impact on him as he had seen the negative consequences of the liberal-conservative policies on workers and the poor with his own eyes, the Argentine academic points out. This prompted Dr Guevara, as well as many other Argentine doctors trained in the social health school of Dr Ramon Carrillo to go to Cuba and take part in the revolution in order to change the system, according to Mele.

Prior to the revolution of 1953-1959 there was no free government-funded health programme in Cuba under Fulgencio Batista. Health services were virtually inaccessible for the low-income and largely agricultural population of the island, the scholar highlights.

"Ernesto Guevara had a lot of influence on the ideas of modifying this catastrophic health situation which the revolutionary government of Fidel faced after taking power", says Mele. "For this reason, rural 'ambulant' doctors were used until the hospital system and the training of doctors were reinforced. This is part of Che's legacy on the Caribbean island". 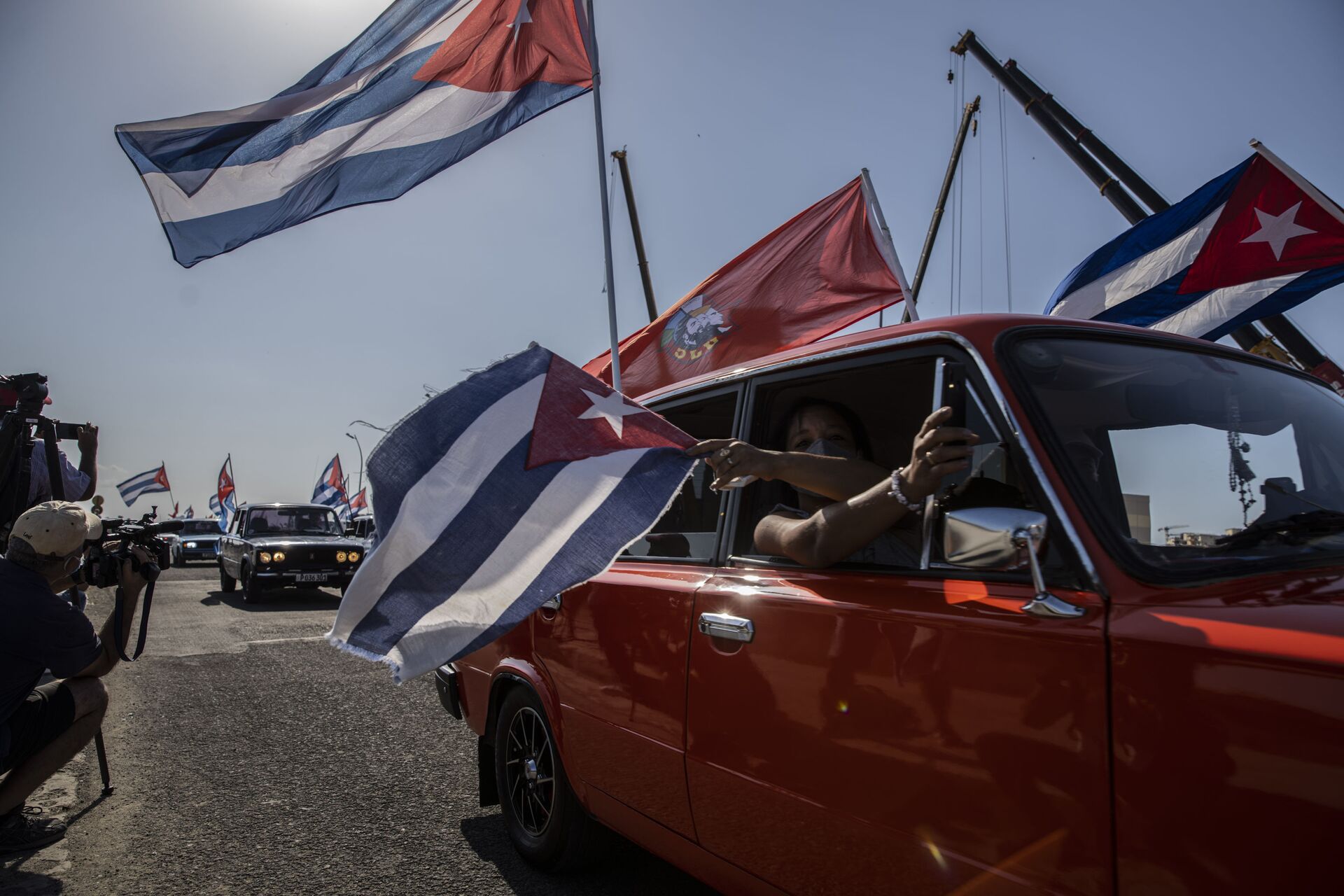 Soviet-era Lada cars flying Cuban flag drive past the American embassy during a rally calling for the end of the US blockade against the island nation in Havana, Cuba, Sunday, March 28, 2021
© AP Photo / Ramon Espinosa

Che's philosophy and approach towards healthcare, education, and general welfare contributed to Cuba's successes in biotechnology, whose "father" though, is Fidel, emphasises Heinz Dieterich.

"[Fidel] created and supervised it with an extreme personal commitment, management, and a special reserve fund in dollars that enabled him to expedite obtaining the international input necessary for the project", the academic highlights.

Speaking to Sputnik last April, Dr Manuel Limonta, one of the founders of Cuba's Centres for Genetic Engineering and Biotechnology (CIGB), described how Castro and a group of Cuban scientists kick-started innovative biotech projects on the Caribbean island. 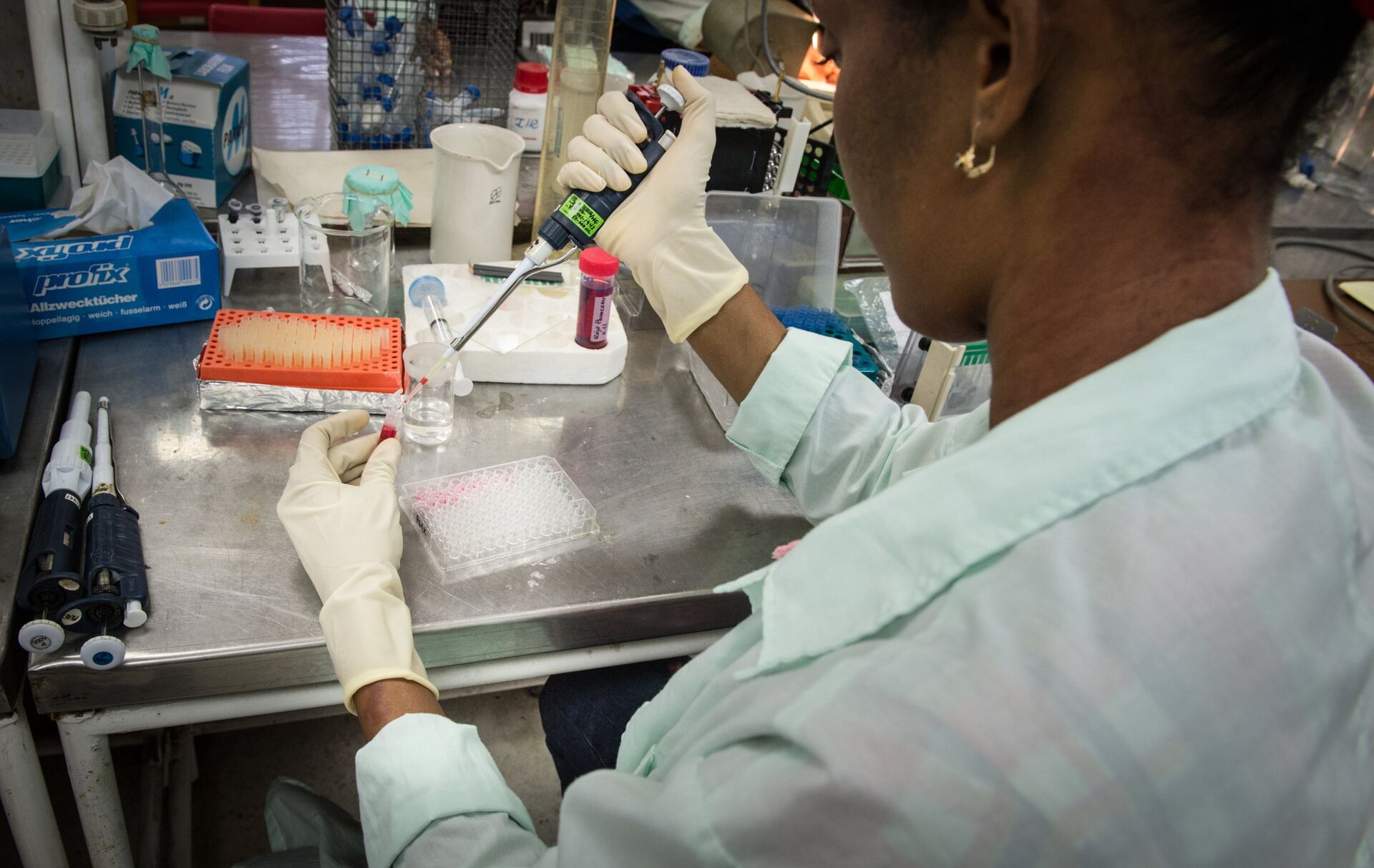 A lab technician works at the Center for Genetic Engineering and Biotechnology in Camaguey, Cuba on June 19, 2015
© AFP 2022 / ADALBERTO ROQUE

The industry continued to develop even after the collapse of the Soviet Union which used to provide financial aid and political backing to Cuba.

"After the collapse of the Soviet Union, the funding came from the very limited foreign exchange income available", says Dieterich. "A small part came from sales through Western capitalist corporations, who used Cuban products under their brand names on the international market, in Leonine contracts with Cuba. The comparatively low salaries and cost of living in Cuba are also a fundamental factor in the economic equation. Yet another low-cost factor in Cuba is that the enterprises don't pay exorbitant dividends to investors". 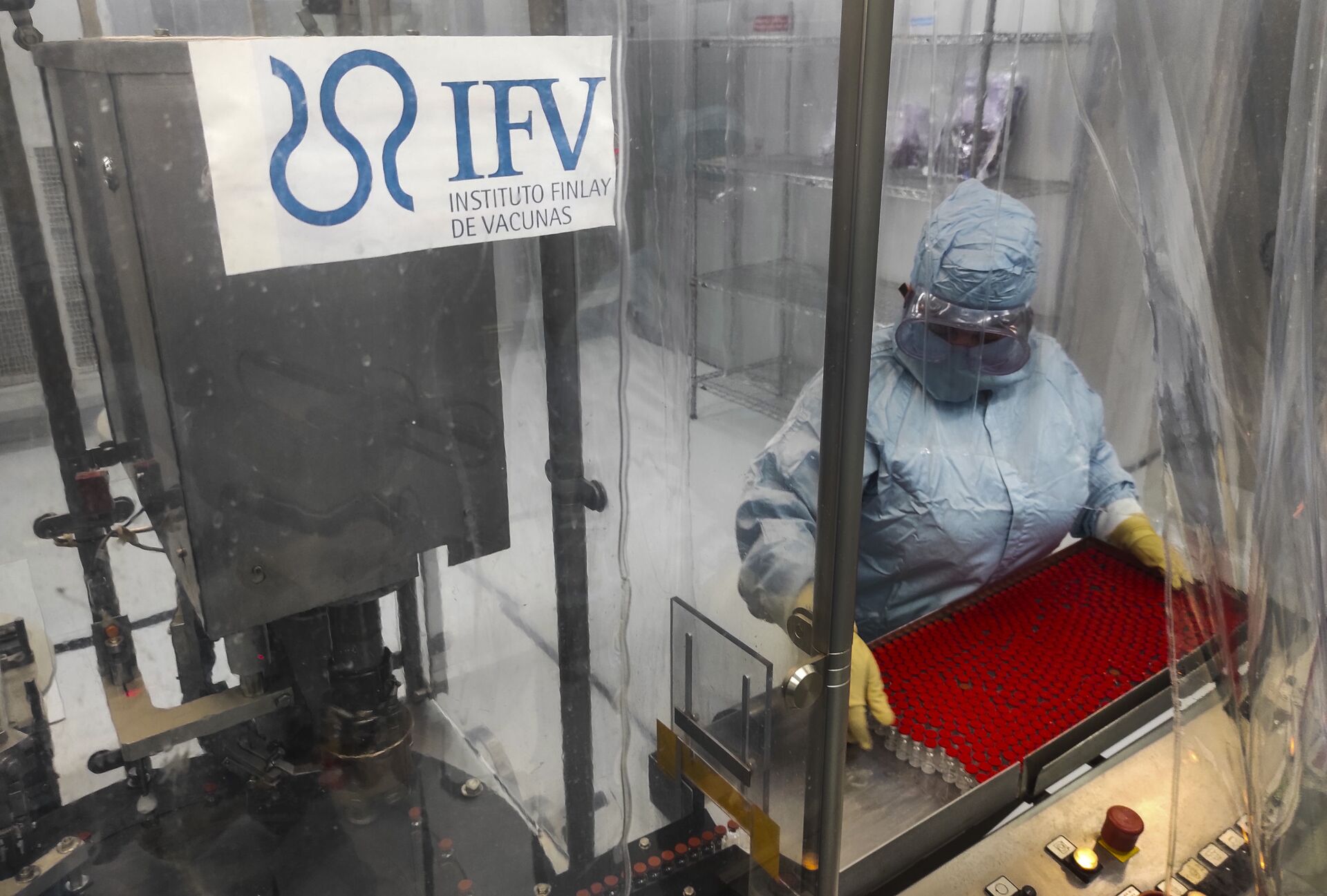 Technician Mayelin Mejias works with the "Soberana 02" COVID-19 vaccine at the packaging processing plant of the Finlay Vaccine Institute in Havana, Cuba, Wednesday, Jan. 20, 2021. The director of the Finlay Institute said that Cuba hopes to immunize the country’s entire population this year with their own “Soberana 02” vaccines.
© AP Photo / Yamil Lage

One might wonder whether other Latin American countries could replicate Cuba's achievements in the healthcare and biotech industry. According to Dieterich, first and foremost, a country needs to maintain sovereignty to have sustainable development.

As long as a number of Latin American states continue to be suppressed by the US within the Monroe Doctrine, they will be unable to produce anything worth mentioning against COVID-19 or any other pandemic, the professor believes.

The successes of Cuban healthcare and scientific research were especially evident during the past two years of the pandemic, notes Carlos Pereyra Mele. In particular, he refers to Cuba having dispatched 56 brigades of the Henry Reeve International Contingent of doctors specialising in disaster situations and epidemics to combat COVID-19 worldwide. The island nation's Interferon Alpha 2b, developed by the CIGB was instrumental in treating COVID patients in China in the early months of the pandemic.

"We must recognise that scientific research has reached a high quality [in Cuba] due to a sustained and prolonged effort of the state in supporting scientists despite so many sanctions and limitations imposed by the US", Mele says. "We must also remember that every [Cuban] scientist is also a 'product' of social medicine that provides good physical and mental health from childhood until reaching university, and then permanent training. All that was achieved due to the pillars installed in the 1960s".