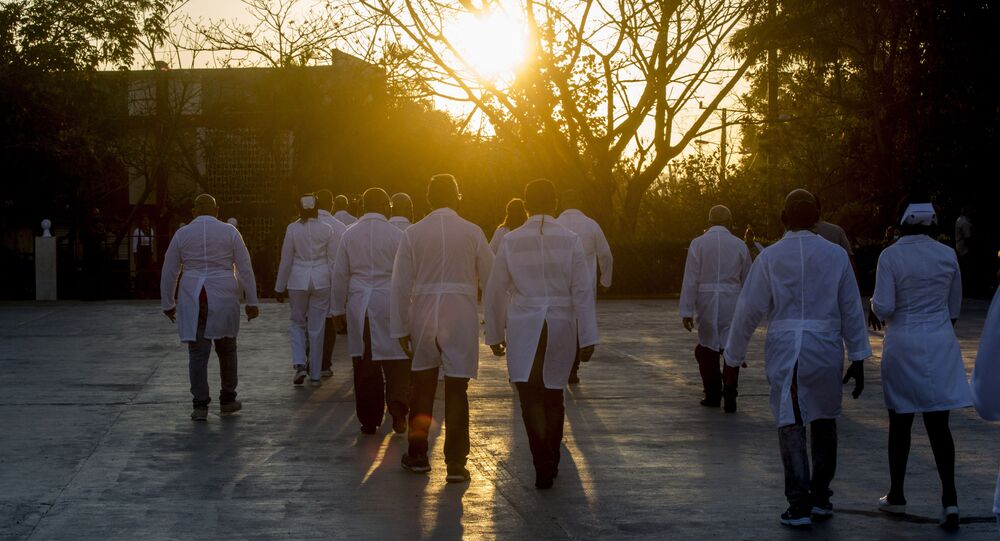 Cuba's Henry Reeve International Medical Brigade is highly in demand across the world amid the COVID-19 pandemic. Dr Manuel Limonta, vice president of the World Academy of Sciences (TWAS) and one of the founders of Cuba's biotechnology has explained how the nation managed to create an efficient disaster healthcare team despite the embargo burden.

Cuban disaster medicine professionals have been dispatched to at least 14 countries so far, including Italy, Spain and Andorra, where they are struggling to curb the coronavirus outbreak.

However, the heroic efforts of Cuban doctors have received little if any recognition from the Western mainstream media, which is addressing the issue only to warn that "the communist island’s practice of exporting medical workers has a dark side" and that "allowing Havana to exploit the virus for hard currency will just empower repression at home".

In late March, Cuba sent 52 doctors and nurses to Italy, the European country most severely hit by the coronavirus disease.

​The country's medical volunteers, who were among first responders to the COVID-19 outbreak in Wuhan a few months ago, also rushed to Venezuela, Belize, Nicaragua, Haiti, Jamaica and many other countries.

We say bienvenido a Barbados to the more than 100 nurses who arrived Grantley Adams on Sunday night after having flown for more than 5 hours from Havana (with a fuel stop in Antigua) on board two specially chartered Liat aircraft. #beatcovid19together #barbados pic.twitter.com/7Eil1baI7E

​It is not the first time that the island nation has come to the rescue of those in need: in 2014 it offered over 460 doctors and nurses to West Africa to cope with the Ebola outbreak; it helped Haiti combat cholera and dealt with the consequences of the 2010 earthquake; it lent a hand to victims of Hurricane Mitch in Central America in 1998; it treated over 25,000 children for radiation poisoning in the wake of the 1986 tragedy in Chernobyl; and provided urgent medical aid to Chile after an earthquake in 1960, to name just a few episodes.

“Belize recognizes the exceptions efforts of Cuba over the last 60 years in consistently providing medical and technical assistance in times of public health emergencies,” https://t.co/SxYMi5IaKA

​"The Henry Reeves contingent has an internationally recognised record of assistance to many countries in cases of diseases, disasters and other natural phenomena", says Dr. Manuel Limonta, vice president of the World Academy of Sciences (TWAS) and one of the founders of the Centres for Genetic Engineering and Biotechnology (CIGB). "It is a contingent of doctors who, on a voluntary basis, are demonstrating their humanistic awareness and love of medicine in their bid to support other countries in need."

​The organisation was officially established by Fidel Castro on 19 September 2005 following Washington's refusal to accept aid from 1,586 Cuban humanitarian doctors amid the Hurricane Katrina disaster. This team of volunteers was named after Brigadier General Henry Reeve, an American who fought for Cuba's independence from Spain in the 1870s.

Even before the pandemic erupted, more than 28,000 Cuban medical professionals were working in 59 countries throughout the world, mostly assisting developing and poor nations.

What's Behind the Brigade's Efficiency & Resilience?

Dr. Limonta outlines a number of reasons for the recognised efficiency of the Henry Reeves contingent, first singling out "the high quality of medical training in Cuba, compared to the best medical universities in the world". He added that the Cubans have an in-depth knowledge of patient care, which includes "vigilance for society and vigilance for the citizen as a social entity" in addition to their understanding of biology and psychology.

The scientist highlights that Cuba's socialist concept played a crucial role in developing a system which guarantees the government support for prevention and cure of diseases, as well as rehabilitation in necessary cases within the framework of universal health coverage.

According to Dr. Limonta, much of the credit goes to Fidel Castro who was "the greatest enthusiast, counsellor and participant [of the effort] guided by the principle of maximum attention to the health of the people".

He recollects that Castro was behind the creation of medical universities and important scientific institutions throughout the country in order to provide Cubans with the best medical aid in terms of both quality and quantity. One should bear in mind that the Cuban healthcare has been evolving under the heavy pressure of US sanctions.

"The North American blockade has undoubtedly affected the entire Cuban health system but the potential accumulated by Cuba's healthcare is of such magnitude that despite the affectations of the blockade, the system remains capable of solving Cuba's problems and even helping other countries, as is the case today, when Cuba has sent medical aid to combat COVID-19 to different countries of the world, including Italy", adds Limonta, former founder and first director of the Centres for Genetic Engineering and Biotechnology of Cuba.

© REUTERS / Oswaldo Rivas
A child plays in front of a mural of late former Cuban leader Fidel Castro at the market in Managua, Nicaragua November 27, 2016.

On 15 November 1999, the Cuban government founded the Latin American School of Medicine (Escuela Latinoamericana de Medicina, or ELAM) which is regarded as one of the largest medical schools in the world by enrolment. More than 29,000 physicians from over 110 countries have graduated from the medical institution since its first class in 2005.

In general, the island country has 485,475 workers in its national health system, with 8-9 doctors for every 1,000 people. For comparison's sake, the US has just 2.59 physicians per 1,000 people, according to the World Health Organisation (WHO).

In 2007, Canadian Cuba experts Robert Huish and John M. Kirk released their book "Cuban Medical Internationalism and the Development of the Latin American School of Medicine" which offered an insight into the Caribbean nation's experience and best practices in containing pandemics and coping with disasters. The study found that Cuba had provided more medical personnel to the developing world than all the then-G8 countries combined, while at the same time remaining largely neglected by both Western mainstream media and academia.

However, on 26 May 2017, the Henry Reeve International Medical Brigade was awarded the prestigious 2017 Dr Lee Jong-wook Memorial Prize for Public Health for its emergency medical aid to more than 3.5 million people in 21 countries hit by disasters and epidemics since the organisation's founding in September 2005.