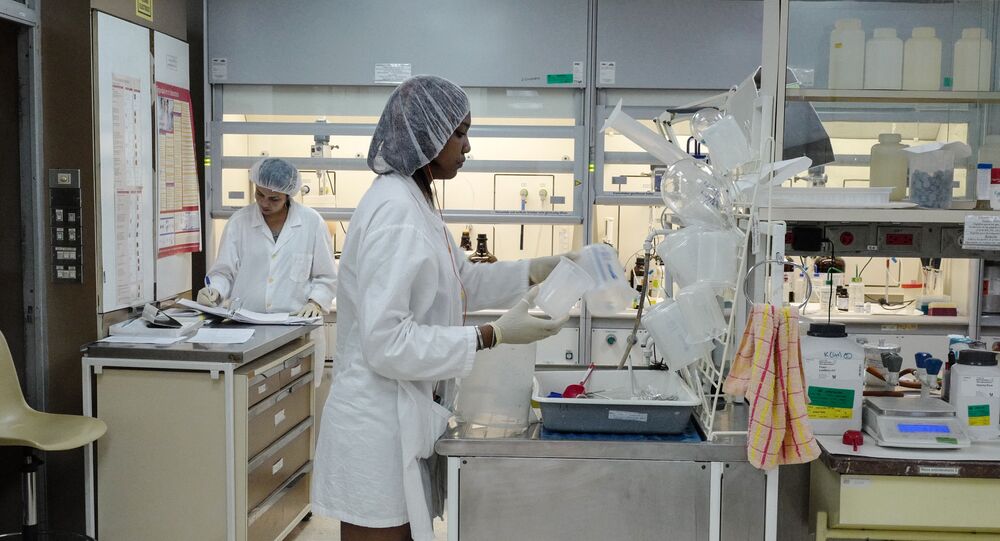 Cuban Biotech to the Rescue: The Story of a Potential Anti-COVID-19 Drug Told By One of Its Creators

The Cuban biotech industry has offered its own tool to fight the coronavirus disease. Dr. Manuel Limonta, one of the founding fathers of Cuba's biotechnology initiative, has explained how the island nation has mastered itself in producing interferon, a drug chosen by a number of countries to treat COVID-19.

Amid the media buzz about hydroxychloroquine, an anti-malaria drug lauded by Donald Trump as a potential cure against COVID-19, recombinant interferon remains neglected despite being one of medicines which have proven effective in curbing China's coronavirus epidemic.

Interferons (IFN) are the group of signalling proteins produced by cells to trigger defences of a human immune system in the event of viral attacks. Discovered in 1957 they were named for their ability to "interfere" with the infection process by protecting cells from pathogens. Since then, biotechnologists found the way to artificially produce the substance it has been used as a part of complex treatment against such severe illnesses as HIV, cancer, hepatitis B, hepatitis C, pneumococcal invasive diseases, and considered instrumental against SARS-Cov and MERS-Cov.

The specific drug that came in handy during China's fight with COVID-19 was recombinant Interferon Alpha 2b, developed by Cuba's Centres for Genetic Engineering and Biotechnology (CIGB) and manufactured by a joint Chinese-Cuban enterprise.

​Dr. Manuel Limonta, one of the founders of the Centres for Genetic Engineering and Biotechnology (CIGB) and vice president of the World Academy of Sciences (TWAS), took a walk down the memory lane describing how the Caribbean nation had started producing the wonder-drug.

While Cuba's disaster healthcare professionals have recently come to the front in the struggle against the coronavirus pandemic, few know about the country's advanced biotechnological and pharmaceutical industry and research institutions. According to Dr. Limonta, it all started in the aftermath of the Cuban Revolution of 1953-1959, in the wake of Fidel Castro's  26th of July Movement.

"Fidel was interested in the constant development of capacities for the medical care of the Cuban population with the creation of hospitals and scientific institutions to support this development", recollects Dr. Limonta. "Cuba helped other countries and also received help from the extensive exchange that has always been Cuba's policy in medical care and scientific development for health that has been practiced worldwide".

According to the professor, recombinant interferon Alpha 2b, a Cuban-manufactured coronavirus treatment, has antecedents which the nation got access to in 1980 due to international collaboration.

"In December 1980 the director of the MD Anderson Hospital, Professor Randolph Lee Clark visited Cuba with a group of North American doctors and in an interview with Fidel expressed his hopes that interferon could be a good medicine to fight cancer and viral diseases and that it was also used in different researches at his hospital in Houston," Dr. Limonta says.

During this interview, Clark invited Cuban researchers to visit his centre in order to learn about the use of the new drug. Fidel took a great interest in this product and two Cuban doctors were selected to visit Clark's laboratory. One of them was Manuel Limonta and the other one Victoria Ramírez.

"The Cubans learned that [the human alpha] interferon was produced in Finland from white blood cells (WBC) and that this country was the only one that had achieved sufficient production [of the substance] for clinical applications as it was done at Anderson Hospital", the scientist recollects.

By that time the Comandante had set his mind to the production of interferon in Cuba, and therefore he decided to send researchers to Finland to learn how to synthesise the substance.

Dr Kari Cantell, director of the Finnish interferon project, agreed to show the production method and then a Limonta-led group of Cuban researchers, including Victoria Ramírez, Eduardo Penton, Pedro López Saura, Angela Aguilera, and Silvio Barcelona headed off to Finland for training.

"There we learned about the production process, and in a very short time all the conditions in Cuba were created by adapting a house as a laboratory to produce leukocyte interferon (IFN-alpha)", the scientist says. "Fidel had a fervour and enthusiasm to support everything that was related to the possibility of making interferon in Cuba. This enthusiasm rubbed off on the researchers, and in a record time the production of an interferon of Cantell-like quality was started"

© AFP 2021 / ADALBERTO ROQUE
A lab technician works at the Center for Genetic Engineering and Biotechnology in Camaguey, Cuba on June 19, 2015

"Fidel used to visit the house transformed as a lab very often", Dr. Limonta recollects. "From the date our group came back from Finland in the month of March up to 28 May, when we placed in his hands the  final Interferon produced, he visited the small laboratory more than 40 times to check the evolution of the work. He used to bring a small notebook and make notes of different questions from him to the group".

On 28 May 1981 the new substance was delivered to Fidel Castro, and pre-clinical and clinical tests for the use of the alpha interferon began almost immediately.

"A few days later, Fidel made the decision to build a brand new institution with two missions: first, to increase the capacity of leukocyte interferon production and, second, to start working on the research, development and production of recombinant products mainly the recombinant Alpha 2b Interferon", he says.

The best medicine is not that which cures but that which prevents. Cuba went for preventative medicine, without neglecting healing medicine. Fidel left us that legacy thanks to which we can face this pandemic and make our modest contribution to the global fight.#CubaSalvaVidas pic.twitter.com/DDAdXCwtFL

​According to the academic, at that time our group of six people grew up to more than 20 as it was joined by technicians and other personnel. The building of the new institution was inaugurated by Kari Cantell and Fidel Castro as the Centre For Biological Research (CIB) on 20 of January 1982. Manuel Limonta was appointed as the director general of the CIB.

Limonta emphasises that his group became the second interferon maker after Kari Cantell's laboratory that received recognition for both high quality and volume produced. "The leykocyte interferon is recognised as the first product of Cuban biotechnology, as it was produced under the concept of a 'close circle' of research, development, production, and application in a very short period of time", the professor explains.

"In 1981 Cuba suffered an epidemic of dengue haemorrhagic fever and subsequently haemorrhagic conjunctivitis," he notes. "Interferon was applied as one of the main therapeutic elements for both viral diseases. This leukocyte interferon was applied in Cuba from 1981 in different research protocols of different viral diseases and received support in national and international scientific publications."

The scientist points out that since 1986 the Centre for Genetic Engineering and Biotechnology has mastered a new, more cost effective method of production of the alpha interferon, based on genetic engineering technology. The new recombinant human Interferon, Alpha 2b, became known under its trademark Heberon® Alfa R.

​Production of the recombinant drug Interferon Alpha 2b at the Centre for Genetic Engineering and Biotechnology in Cuba.

The development of the Cuban biotechnological sector occurred under the US-driven blockade, and when matters worsened after the collapse of the USSR in 1991. The Caribbean nation struggled to obtain advanced technologies and good-quality raw materials and reagents, buying them at much higher prices. Nevertheless, the industry continued to thrive.

In addition to natural and recombinant interferon, Cuba's Centres for Genetic Engineering and Biotechnology (CIGB) developed, in particular, the recombinant vaccine against hepatitis B, the meningitis B vaccine, as well as a number of recombinant biopharmaceuticals to provide care for the country's population. The entity got several important patents, pioneered technology transfer for some of its products and kicked off joint production with companies across the world.

In mid-March 2020, the Cuban pharmaceutical industry signalled that it guarantees the production of two dozen medicines used in treating COVID-19 including, most notably, Interferon Alpha 2b. According to teleSur, over 45 countries have requested interferon from Cuba. CIGB Director-General Eulogio Pimentel Vazquez asserted the media outlet that the product which they have in inventory "would be equivalent, practically, to the amount necessary to treat the total of all the infected that occurred in China".