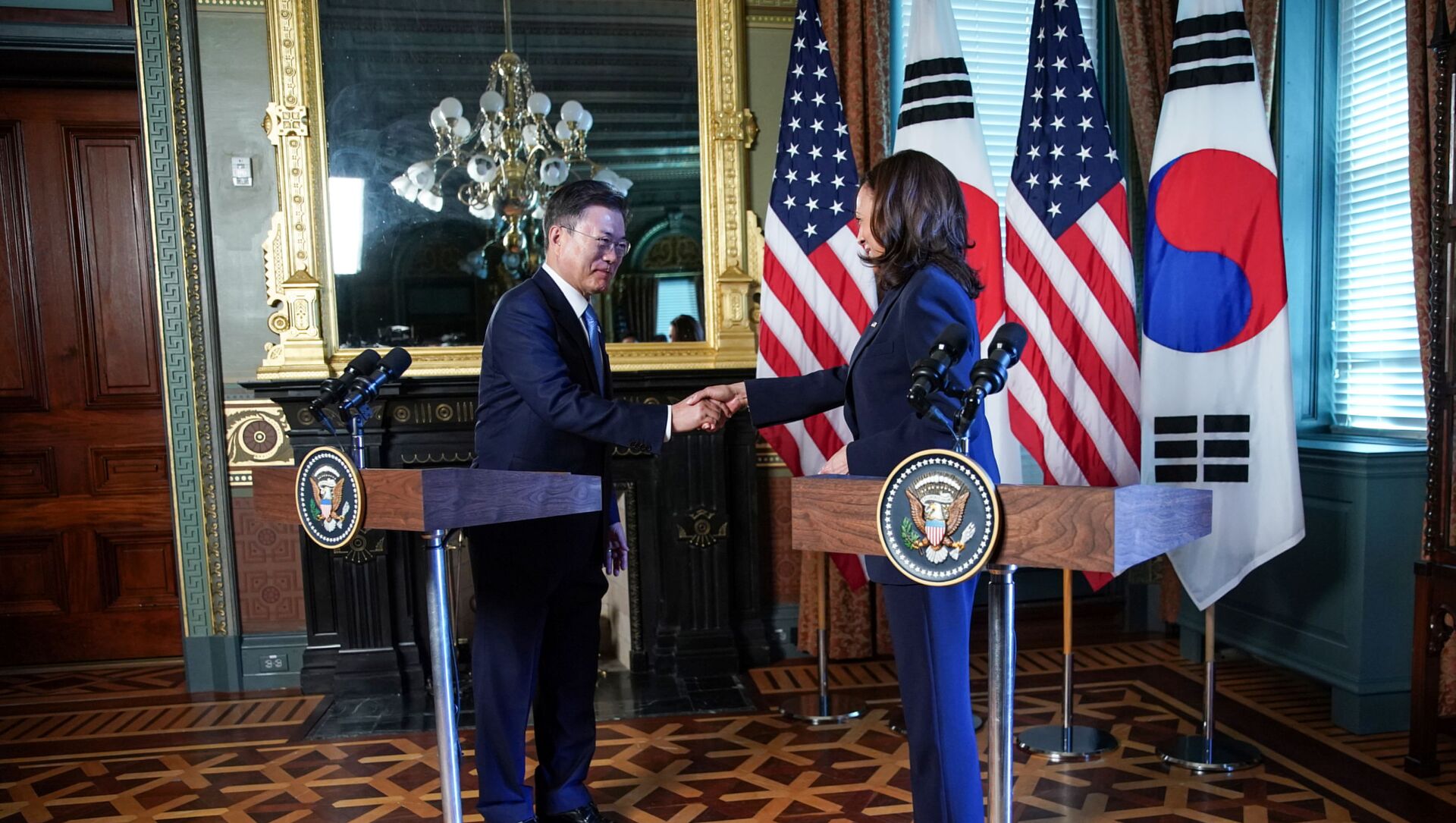 Aleksandra Serebriakova
Moscow-based Sputnik correspondent specializing in foreign affairs.
All materialsWrite to the author
US Vice President Kamala Harris held a high-profile meeting with South Korean President Moon Jae-in on Friday to discuss mass migration, North Korea, and other outstanding issues. But one moment in particular from their meeting has caught the attention of the social media crowd.

Kamala Harris has been accused of “insulting” and “embarrassing” behaviour after she was caught on camera wiping her palm on her jacket shortly after shaking hands with South Korean President Moon Jae-in during their meeting in Washington on Friday.

Shocked viewers zoomed in on the moment and shared it online, causing an avalanche of comments from astonished users, many of whom found the move – accidental or not – deeply disrespectful to the South Korean politician.

Harris revealed on Twitter that during their bilateral summit, the two discussed global health, North Korea, and migration from the Northern Triangle, a term which refers to three Central American countries – Guatemala, El Salvador, and Honduras.

“How can you do that knowing cameras are recording your every move?” one person shockingly asked.

“Kamala Harris does a hand wipe after shaking hands with SK President Moon! Wow! That’s so embarrassing!” another one raged.

#KamalaHarris (who is apparently doing most of #JoeBiden’s job) insults #SouthKorean President by wiping her hand off after shaking his hand. How can you do that knowing cameras are recording your every move? #moonjaein #southkorea #kamala #comeonman pic.twitter.com/w81ddravAE

Around the world, people are commenting on Kamala Harris insulting South Korea Pres. Moon Jae-in with the swipe of a hand! https://t.co/o22RYbAJtZ

Some users pointed out that if a GOP member did something similar, they would have been deemed “racist” straight away.

This is the USA VP?
Not only disrespectful, but it would be "racist" if this was a Republican, all over the news for sure...Double standards on full display.https://t.co/Q1tnaKgcRs

But others suggested that the vice president may have simply fallen victim to the germophobia that has gripped the world during the COVID pandemic.

Harris has remained silent on the situation so far.