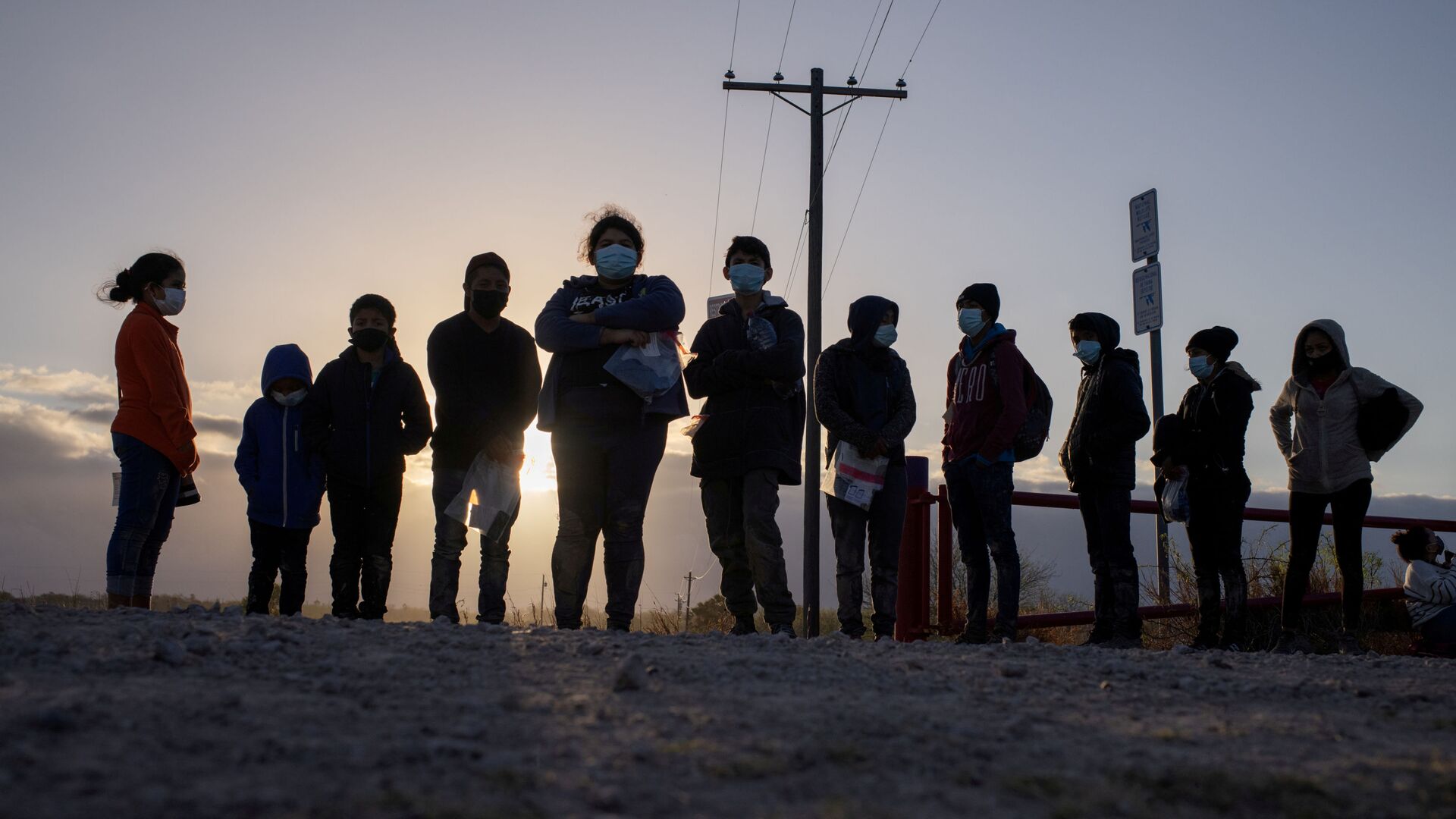 Ekaterina Blinova
All materialsWrite to the author
The US is on course to encounter the highest number of people trying to cross its southwest border in the last 20 years, Homeland Security Secretary Alejandro Mayorkas acknowledged on 16 March, while the White House is still in denial about the border crisis.

Earlier this week, DHS head Alejandro Mayorkas embarked on a trip to El Paso, Texas together with a bipartisan group of American lawmakers. The press was not allowed to cover the delegation's visit, however, having returned from the tour Sen. Rob Portman (R-Ohio) said that "it was stunning to see how many people, including unaccompanied children, unlawfully crossed the border." Citing border patrol agents, he said that a processing facility in Paso del Norte is dealing with a 150-200 percent increase in migrants.

In February 2021, the US Customs and Border Protection (CBP) caught 100,441 people trying to cross the southwest border, representing a 28 percent increase on January 2021.

Republicans are blaming the influx on Joe Biden's loosened border policies and his promise to legalise about 11.3 million unauthorised migrants in the country. The latter measure has long been seen by the GOP as the Dems' attempt to beef up their electoral base. In 2013, Pew Research revealed that of the Latino immigrants who are eligible to vote, "many more identify as Democrats than as Republicans – 54 percent versus 11 percent," adding that Hispanics constitute three quarters of illegal immigrants in the US. Immigration reform could become an "electoral bonanza" for the Dems, Politico suggested in April 2013.

​"Many analyses have consistently shown that immigration has a negative impact on Republican votes as a whole, even though increases in immigration have often proven to be an important policy issue that increases GOP turnout," says American independent journalist Max Parry. "So there is no doubt that the Democrats know changing demographics from immigration are more likely to benefit them than the GOP."

However, those who support a steady influx of migrants do not necessarily agree on the question of whether they should be legalised as citizens, according to the journalist.

"For example, many powerful US business lobbies such as the agricultural industry and farm owners rely on exploiting cheap and illegal non-citizens for seasonal labour," he highlights. "The farmers lobby and agricultural groups have often blocked immigration bills that would require electronic verification systems that would prevent employers and businesses from being able to hire and exploit illegal immigrants who cannot unionise."

According to CBS News, out of 11.3 million of illegals, eight million have jobs. Overall, undocumented immigrants make up to 5 percent of the US workforce: 53 percent of them are hired farmers; 15 percent are involved in construction; 9 percent work in production with the same percentage is employed in services; and 6 percent labour in transportation. The demand for unauthorised workers is growing steadily in many sectors, the news agency said.

The House this week will bring to the floor 2 bills tweaking citizenship processes:
- 1 creates pathways for Dreamers, undocumented people brought to US as children
- 1 creates temporary status and green card processes for ag. workers https://t.co/Ze9ctLfku8 per @RebeccaMorin_

​Explaining why American dairy farmers tend to hire illegal immigrants, the 2017 Cornell Farmworker Programme's research cited the lack of a visa programme for year-round workers on dairy farms and problems to find and keep reliable US citizens to do the jobs, because farm work is seen as physically demanding, dirty, dangerous, and socially denigrated. Besides filling jobs unwanted by citizens, the cheap labour of unauthorised workers keeps prices low.

For its part, big business traditionally uses mass immigration to drive wages down and to combat organised labour, which protects workers from unfair competition, notes Parry, adding that "this has become taboo to say, especially on the left."

"There is no denying that large corporations both encourage and use illegal immigration to deliberately import a supply of low-wage workers they can exploit while undermining the power of organised labour to collectively bargain with employers. By keeping borders open and immigration unrestricted, the workforce can be replaced with cheap labour," he says.

In April 2020, the New York Times bemoaned the fact that a surge in deportations under Donald Trump aggravated labour market shortages adding that 50-75 percent of all "crop hands" are undocumented migrants.

However, CBS and NYT somehow failed to notice that undocumented workers are more vulnerable to exploitation and human rights abuse than US citizens. Illegal immigrants are "unlikely to raise grievances with their employers or the authorities" because they could lose their only source of income and be locked up or deported, according to the Ethical Trading Initiative, a UK-based independent body.

Furthermore, "large-scale migration flows are too often exploited by 'bad actors' for profit – ranging from criminals who exploit trafficked people to employers who do not meet legal hiring practices," the Washington DC-based Migration Policy Institute (MPI) highlighted in a 2014 report, adding that consumers unknowingly also aid exploitation of illegals. 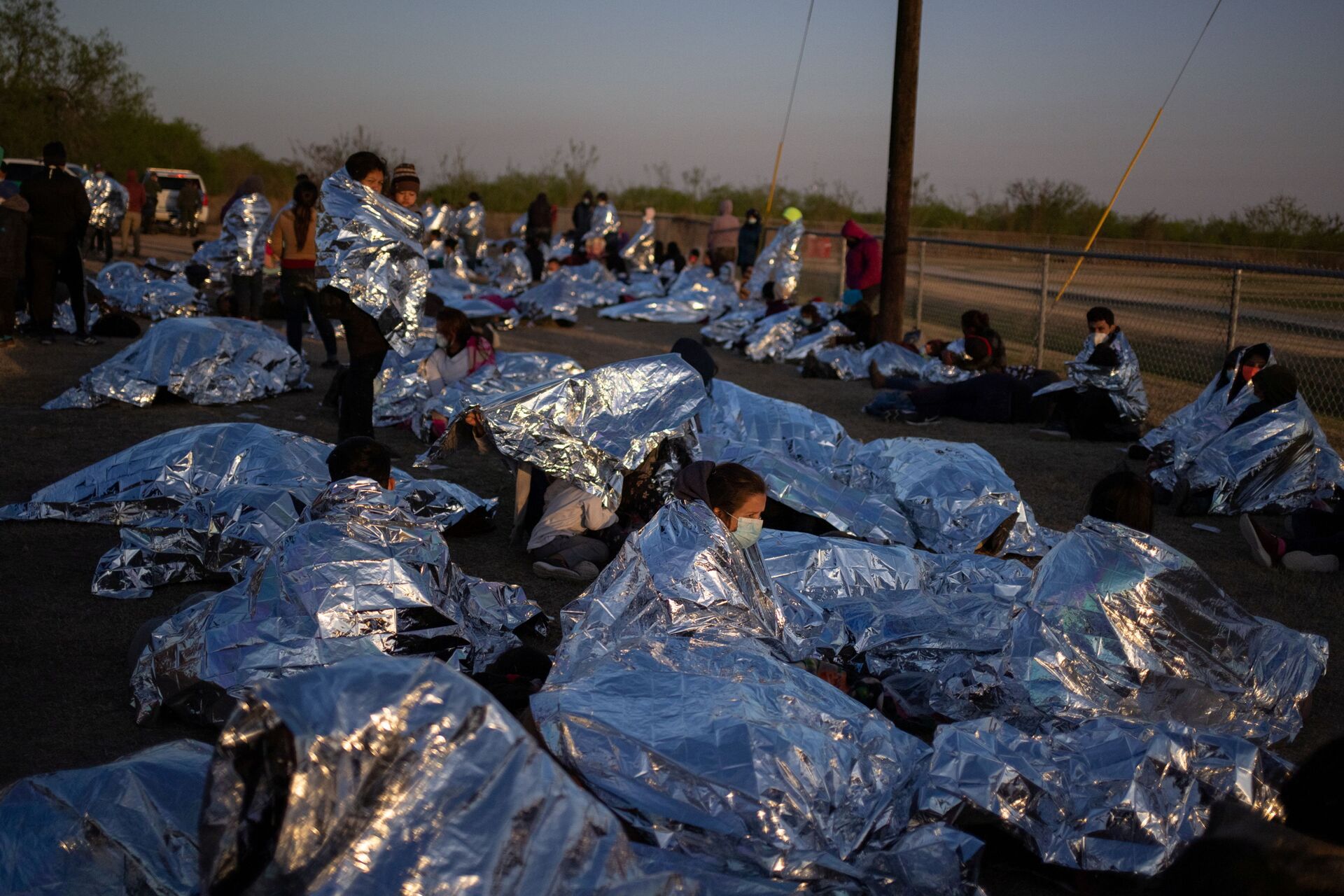 Linda, an asylum-seeking migrant from Honduras, awakes at sunrise next to others who took refuge near a baseball field after crossing the Rio Grande river into the United States from Mexico on rafts, in La Joya, Texas, U.S., March 19, 2021.
© REUTERS / ADREES LATIF

Honduras and Vicious Cycle of US Interventionism

"It has become almost cliche at this point for advocates of open borders and unrestricted immigration to deny there is any crisis at all on the US southern border. Why? Because to acknowledge there is a humanitarian crisis on the border would force US politicians, mainstream media, and naive advocates of open borders to have a conversation about the consequences of American foreign policy," says Parry.

The journalist notes that the immigration debate is routinely limited by corporate media to questions of who is behind the migrant caravans or immigration laws. However, it is more important to ask how this crisis came about in the first place, he argues.

Two mothers with four children and a woman from Honduras with an infant expelled from the U.S. in the early hours of the morning as some migrant families are taken in, others 'kicked out' ✍️ @laurenvillagran 📷 de su servidor para @elpasotimes @USATODAY https://t.co/eVcSAVbF67 pic.twitter.com/qex4gskjPV

​How did Honduras become the source of perpetual migration? The answer is apparently the 2009 coup d'etat, which ousted the democratically-elected reformist President Manuel Zelaya, empowered by the Obama-Biden administration and Hillary Clinton's State Department, Parry says.

"Fundamentally, the US foreign policy created the migrant crisis coming from countries like Honduras which has a long history of American interventions, including seven in the last century," the journalist notes. "In the early 1900s, the Central American country was known as a 'banana republic' controlled by the United Fruit Company and the US military was called in to put down several uprisings. It was later an outpost for training the Contras fighting the Sandinista government in Nicaragua during the Reagan administration. The crisis on the US-Mexico border is a direct result of our military interventions and that is a conversation that neither political party in Washington wants to have."