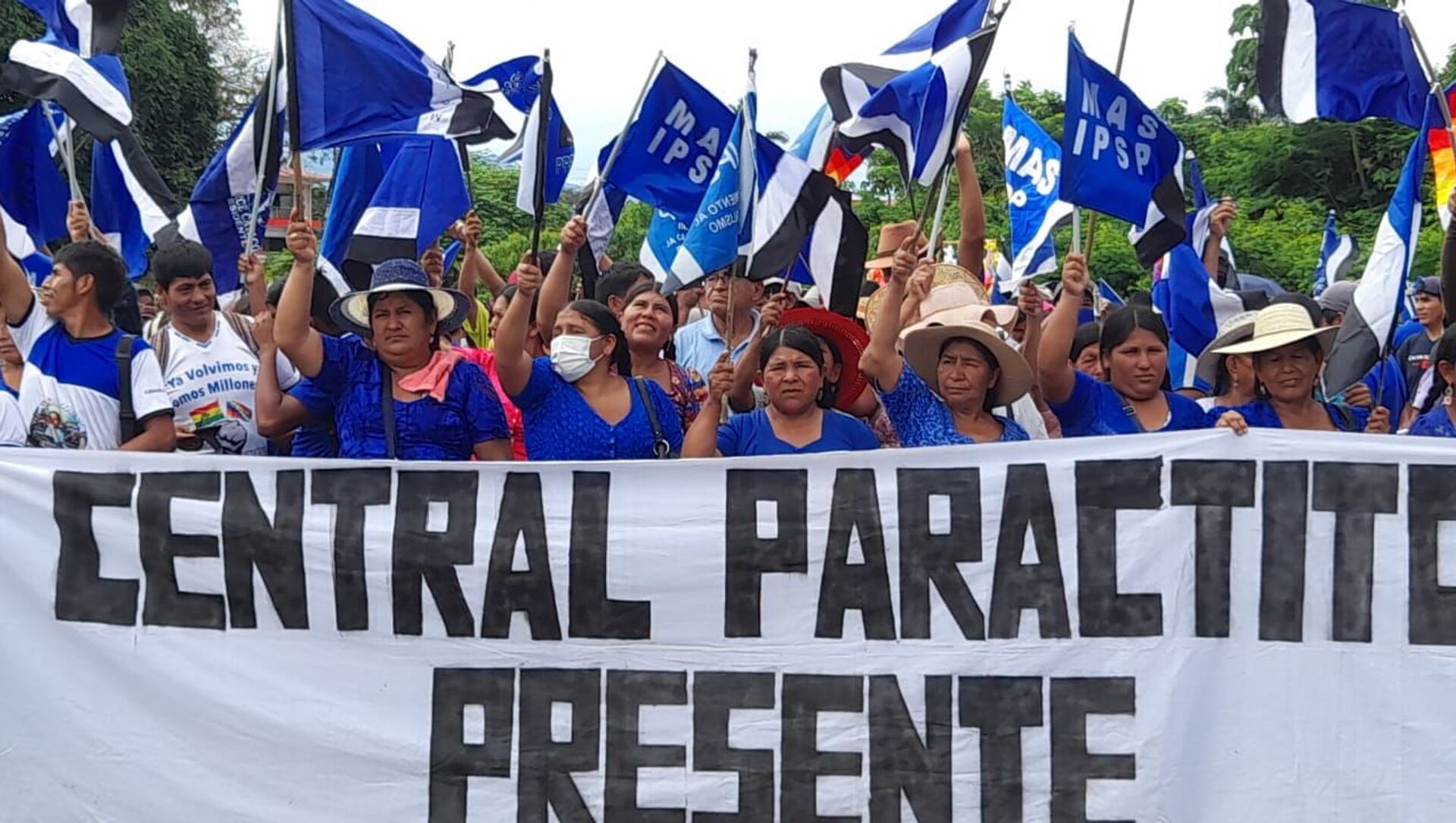 Mohamed Elmaazi
All materialsWrite to the author
Less than one year after Bolivia's 'coup' government was removed from power, the Movement Towards Socialism is expected to sweep the local, municipal and gubernatorial elections. Bolivian journalist Oliver Vargus tells Sputnik why that is, in an exclusive on-the-ground report from the Latin American country.

Bolivia is scheduled to hold regional elections for governors, mayors and councils across the country, on 7 March 2021. In October 2020, Movement Towards Socialism (MAS) candidate Luis Arce was elected to the presidency with over 50 percent of the vote. His success followed one year of rule by de facto president Jeanine Añez, who assumed power after socialist president Evo Morales, along with other members of his party, were forced to step down, despite winning over 47 percent of the vote in 2019.

Morales' exit, which he said was the result of a coup d'état, came amid opposition protests, calls for him to go by the head of the military and claims of electoral fraud made by the Organization of American States (OAS). The OAS claims were ultimately contradicted by analysis from the Washington DC-based Center for Economic and Policy Research, as well as the New York Times, which had backed the removal of Morales at the time.

Ollie Vargas is a journalist and co-founder of Kawsachun News, the English language service of Radio Kawsachun Coca, an independent Bolivian news outlet. Vargas explained that MAS has made an impressive comeback following a year of rule by Añez, and is currently the only political party "with a physical presence in every municipality, in every region, every culture within the country". As such it is expected to do well on 7 March, at a time when the country is still reeling from the economic fallout of the Añez government and the COVID-19 lockdowns.

Sputnik: Who are the candidates running in the upcoming elections?

Ollie Vargas: Bolivia has local elections coming up on March 7th and it's an interesting panorama because the Movement Towards Socialism (Movimiento al Socialismo, MAS) is the only party with candidates in every region and municipality in the country. The two main opposition, pro-coup, parties that have seats in Congress are 'Comunidad Ciudadana', a neoliberal centrist party led by Carlos Mesa, and 'Creemos' a far-right party led by Fernando Camacho. Comunidad Ciudadana doesn't have their own candidates in 5 of the 9 gubernatorial races, and Creemos only has one gubernatorial candidate, Camacho, who is running to be governor of Santa Cruz.

Our History: Indigenous Women Play Key Role to Restore Bolivian Democracy Amid Coup Gov't - Activist
We can safely say that there is not a single organisation that is challenging MAS at the national level. MAS is Bolivia's only political party with a physical presence in every municipality, in every region, and every culture within the country. The opposition parties are buried under a complex web of alliances with local and regional forces and not one is capable of presenting itself as a national opposition, and have not done so for these local elections.

This is not to say MAS will win every local race, Creemos is likely to win in Santa Cruz, various local candidates are likely to win in numerous places, such as Eva Copa in the city of El Alto, but none have any structures outside their local area. All polls show MAS as the largest single party coming out of these local elections.

Sputnik: What are the kinds of platforms that people are running on?

Ollie Vargas: The breakdown of organised right-wing parties can be explained partly by the fact that they deliberately obscure their real political agenda and ideology. The two main parties have bland corporate marketing type names: 'Citizens Community' and 'We Believe'.

The politics of privatisation, of racial and social exclusion, are wildly unpopular in Bolivia so one has to look at the backgrounds of each candidate to work out their politics, because party programmes and manifestos will not explain anything. We know that Carlos Mesa's party is a neoliberal grouping because Mesa himself is a former President and Vice President during the attempt to privatise natural gas. We know Camacho represents the politics of racial hatred because he led the violent street protests against Evo Morales in 2019 that unleashed a wave of racial violence particularly in the city of Santa Cruz.

Bolivia's lithium industry was completely paralyzed by the coup while the defacto administration sought to privatize the country's natural resources. We spoke to the campesinos who fought to defend their territory.

In the face of this opposition, there's MAS, the only party in the country to have existed continuously for the whole of the 21st century, without alliances or branding changes. Its programme in these elections is a simple one of working with the central government and securing as many public works for their local area and working alongside the social movements and trade unions in their area that are affiliated with MAS.

Sputnik: What's the political and social climate like since MAS returned to government in October 2020?

Ollie Vargas: There's been a remarkable physical calm on the streets but combined with a serious tension simmering below the surface. For MAS supporters there's a real frustration that coup leaders and former Ministers haven't yet been brought to justice. One meeting I attended at the 6 Federations (a rural workers union in the Tropico region), harangued 3 of the new Ministers at a meeting in their union hall for 8 hours, demanding answers to why the coup leaders are not yet in jail. Of course, this isn't purely a question of political will; the government is working with international human rights commissions and others to ensure the whole process is done well and above board, the will is there, in practice these matters can take time.

Bolivian Future Hangs in Balance, MAS Vote Vital to Restore Peace, Indigenous Group Spokeswoman Says
In the economic sphere, there's much more positivity. The large public works projects that were suspended last year have been restarted, such as the city trams project in the city of Cochabamba. The paralysis of these state development projects under the coup brought a great deal of anger and triggered an economic crisis before the pandemic hit.

Another important economic policy has been the refusal to impose a rigid lockdown. Bolivia is a country where most work in the informal economy, so when the coup regime announced a sudden lockdown last year, most were left without any income for many months. Those in working class districts see lockdown as being imprisoned and left to starve. MAS did not impose a lockdown during the recent second wave that the country is only just now emerging from, not imposing such measures has allowed the economy to pick up and it's a key demand of social movements and all of those on low incomes who cannot afford another period without work.

Sputnik: How do you think this climate will impact the upcoming elections, both in terms of people's ability to vote as well as the overall result?

Ollie Vargas: The fact that coup leaders have not yet been arrested has impacted these elections firstly in that many are now candidates, some may win. Fernando Camacho has numerous crimes to answer for but is free to stand as a candidate and is likely to win the governorship of Santa Cruz, the most important department for the country's economy.

A right-wing candidate for the Mayor of La Paz, Ivan Arias, is set to win there and he was the Minister of Public Works in the coup regime and oversaw massive corruption and embezzlement in the state industries that were under his jurisdiction (BOA and ENTEL). Even Añez herself is standing for the governorship of the Department of Beni. The slow pace of justice means that those such as Camacho and Añez have been called as witnesses into various investigations, but not yet arrested, this means they can present themselves as victims of political persecution by MAS and this victimisation can help them shore up support among their bases.